During 2020 and 2021, more than 48 million PCR tests and 30 million rapid tests came out of the Certest Biotec facilities in San Mateo de Gállego, Zaragoza, most of them for the diagnosis of SARS-CoV-2, but also for the identification of many other pathogens causing infectious diseases in humans. During the pandemic, the company's activity increased exponentially, highlighting the 20 years of experience in the development of raw materials and diagnostic tests that the company sells in more than 130 countries. 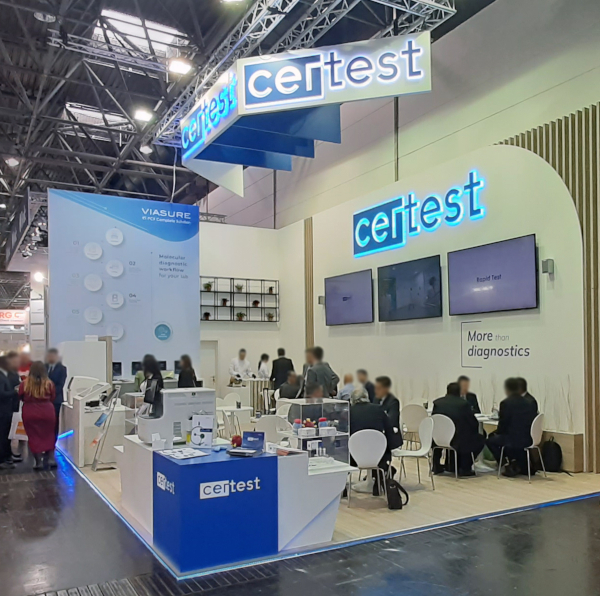 The pandemic was a turning point in the company's history, which faces 2023 with an expansion of its facilities that will make its more than 26,000m2 the largest area dedicated to biotechnology in Spain, and which will also mean an increase in terms of production, innovation and commercial scope.

This is the momento for Certest to introduce its new visual identity, with a renewed appearance and structure as reflection of how the company is positioned not only focused on diagnostic tools, but on the entire process associated with the evolution of a disease, from raw material and reagents for diagnosis, to the development of vaccines, thus becoming a pharma company.

For the creation of the new identity, Certest Marketing and Communication team joined with one of the best local studios in Zaragoza: El 7º de Caballería. They have been collaborating for years on different projects. According to Raúl Alonso Breto, Head of Marketing and Communication at Certest, “working with a trusted studio, knowing how they work, and letting them know how we work, facilitates the process of joint creation and development. After sharing some initial impressions that resulted in an initial brief, they presented us with an identity that, from the first moment, we knew was exactly what we were looking for.”

Certest's new identity unifies modernity, avant-garde, evolution and transformation. Under these pillars, Certest advances to boost its global projection even more. The design is committed to a formal minimalism that unites personality, sophistication and sobriety. To do this, a sans-serif typeface has been chosen, with a robust and geometric line that transports us to the technological world in order to evoke sensations of order, trust and security. These three keys are strategic within the Certest philosophy. The logo is built through a background-shape game between the text and the color tablet. This resource suggests the union of pieces that constitute a whole and brings us closer to the essential values that define the company, such as adaptability and versatility.

The MEDICA fair in Düsseldorf, the world's largest exhibition venue for the health sector, which takes place in mid-November, has been the starting point for change. According to Raúl Alonso, "the change of identity is a broad and ambitious project that will extend throughout 2023, since we are not only talking about the change of logo, but of the entire universe that implies the use of the brand, both internally, of course, and the company's image abroad. We want this change to be a reflection of the evolution and ambition of the company, and presenting it at MEDICA, our most important meeting point with clients, suppliers and friends, will make this year's edition a very special moment for everyone. In addition, we will also celebrate the company's 20th anniversary, so we have a particularly beautiful and emotional moment for all of us who are part of Certest."

Over the next few months, the change will be extended to all areas of the company. The change recalls the origins of Certest, maintaining the characteristic blue tone, in which attributes such as strength, experience, adaptability and innovation, as pillars of Certest, creates a new picture that represents a new step ahead of growth and success for the company.