Neonatal sepsis is a leading cause of global mortality in children under five years old. According to the Global Sepsis Alliance, infections leading to sepsis are responsible for about one fifth of the world's annual 2.7 million neonatal deaths, especially in South Asia and sub-Saharan Africa.

Prompt diagnosis and treatment of neonatal early onset sepsis is crucial to prevent severe morbidity and mortality. However, rapid and accurate diagnosis is often difficult in routine clinical practice because clinical manifestations of this condition can overlap with those of non-infectious conditions.

Here, the laboratory parameter B-R-A-H-M-S PCT can provide valuable information for the detection of neonatal sepsis from the first day of life.

Procalcitonin (PCT) is the prohormone of the hormone calcitonin, and helps to differentiate bacterial from viral infections or other causes of systemic inflammation. Immediately after birth, newborns show a physiological elevation of PCT. Therefore, using PCT in neonates during their first 48-72 hours of life, age-specific PCT reference values apply: in healthy neonates, plasma PCT concentrations increase gradually after birth, reaching peak values at about 24 hours of age, and then decrease to normal values of less than 0.5_g/L by 48-72 hours of age.

B-R-A-H-M-S PCT can provide valuable information for the detection of neonatal sepsis from the first day of life.

The advantages of PCT-guided antibiotic therapy

Antibiotic treatment is started early in newborns who are at risk from infection in order to prevent a possible bacterial infection before it sets in. As a consequence, up to 7% of all newborn babies receive antibiotics within their first three days of life. However, a considerable number of these babies are exposed to antibiotics unnecessarily, as only 0.1% of them have such an infection.

This overuse of powerful antibiotics can have a damaging effect on an infant's developing immune system. Disruption of a baby's microbiome has been linked to several chronic conditions, including allergies, obesity, diabetes and inflammatory bowel disease.

Recently, The Lancet published the results of a new multicenter, randomised controlled trial (NeoPInS) where 1,710 patients had been enrolled in 18 hospitals in the Netherlands, Switzerland, Canada and the Czech Republic in order to evaluate a B-R-A-H-M-S PCT-based clinical algorithm to guide antibiotic therapy decisions in term and near-term neonates with low likelihood of bacterial infection. The study demonstrated that PCT-guided decision-making was superior to the standard care approach, enabling a 15-19% reduction of antibiotic-therapy duration in these newborns.

Thus, PCT can be an important tool, not only for the early detection of sepsis in neonates, but also to guide antibiotic treatment duration and reduce antibiotic exposure of neonates. 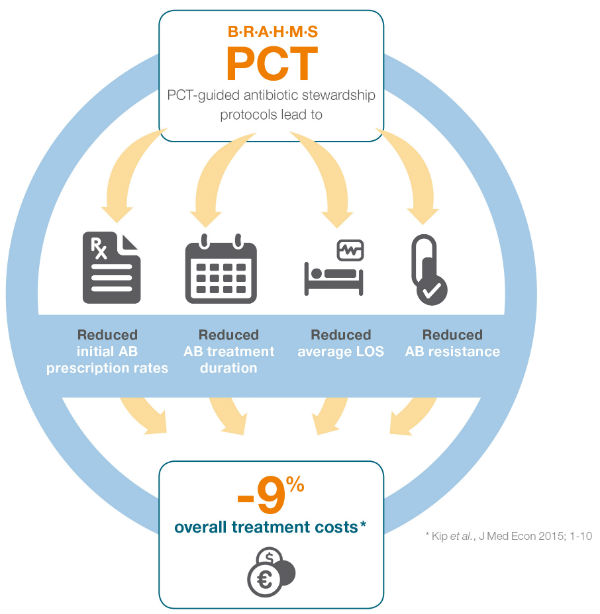 Use of the B•R•A•H•M•S assay has been seen to lower treatment costs by 9%.