Diarrhoeal disease inflicts a significant toll on the healthcare system, and imparts a high degree of morbidity and mortality in select populations. Luminex's new molecular test improves patient outcomes and reduces costs for the healthcare organisation.

Because patients with gastroenteritis present similar symptoms, doctors rely on testing to help identify the causative pathogen and guide their therapeutic treatment. The burden of gastroenteritis on the healthcare system cannot be overstated, often resulting in additional treatments, waiting for results of diagnostic tests and increased costs due to infection-control practices such as barrier nursing and patient isolation. Moreover, the positivity rate for traditional, largely culture-based testing is only 6-8%, meaning that, despite the additional waiting time and diagnostic testing, the causes of infectious gastroenteritis are identified using current methods.

The xTAG gastrointestinal pathogen panel (GPP) is a qualitative, bead-based, multiplexed, molecular diagnostic test that simultaneously rules out more than 90% of known gastrointestinal pathogens commonly implicated in the etiology of acute and chronic gastroenteritis (see Table 1). The assay procedure consists of four steps and 24 samples can be completed in approximately five hours.

The xTAG GPP assay can provide a significant impact to patient care and hospital resources by providing a more comprehensive answer and higher diagnostic sensitivity with a much faster turnaround time than current methods. Additionally, diagnostic-testing laboratories will benefit from the opportunity to streamline their testing procedures and return certain results on the same day.

While stool-testing algorithms can vary depending on the institution, multiple laboratories and testing methods are required in order to fully assess the potential infectious causes of diarrhoea. Compounding the diagnostic and patient-management challenges is that each of these methods has varying turnaround times to results, from half a day to three or more days (Table 2).

In a practical observation of the infectious gastroenteritis-testing algorithm at the Royal Liverpool Hospital, UK, it was determined that by using the standard testing methods described in Figure 1, results were obtained on average of three to five days after requisition. In this same study, it was estimated that the xTAG GPP would provide results up to two days sooner and use fewer laboratory resources.

A clinical study to evaluate the performance of the xTAG GPP against traditional diagnostic methods was conducted on 901 stool specimens from paediatric and adult patients across four clinical sites in Europe and North America, from February to October 2010. The results of these studies showed an overall improvement in sensitivity and specificity with 94% and 98%, respectively, compared with the combined traditional methods of culture, EIA, equivalent performance and microscopy with real-time polymerase chain reaction.

The total diagnostic yield for the assay was two to three times higher when compared with traditional methods, achieving a positivity rate of 20-30% of all samples. Interestingly, in 65% of specimens deemed positive by the xTAG GPP, testing for the identified pathogen was not requested by the ordering physician, illustrating the difficulty in predicting a specific etiology and preselecting appropriate assays for pathogen detection. Concomitantly, the assay was shown to have a very high negative predictive value (over 99% overall), which provides clinicians with confidence in a same-day negative result by the xTAG GPP. An unexpected result of the high diagnostic yield and high negative predictive value was a reduction in the number of retesting requests by physicians, further reducing the testing burden on the laboratory.

As public health investigators attempted to identify the source of the Shiga-like toxin producing the E coli (STEC) outbreak in Germany during Q2 2011, many symptomatic patients reported to the emergency rooms of several hospitals, placing a strain on resources struggling to manage these heavy loads.

A key problem for overwhelmed emergency-room physicians was identifying those patients who were possibly infected with the deadly STEC O104:H4 outbreak strain and in immediate need of close monitoring for signs of haemolytic-uremic syndrome or other serious symptoms of the disease, compared with patients suffering from other less severe forms of gastroenteritis, for which admission and close monitoring were less critical.

Clinicians at a hospital in Cologne were able to quickly validate and use the xTAG GPP assay to differentiate between patients with E. coli infections, and those with other less severe infections. The test also provided a rapid method of detecting the STx-2 gene, a key marker for the more severe STEC O104:H4 outbreak strain. Information provided by this same-day, multiplexed molecular test was used by physicians to appropriately manage limited hospital resources and ensure that those most in need received priority care.

The xTAG GPP is the first commercially available molecular diagnostic test with the ability to simultaneously detect viruses, bacteria and parasites from a single stool specimen. Its improved sensitivity, specificity and turnaround time compared with current stool-testing methods offers the potential for optimisation of patient-management and infection-control practices, along with improved laboratory workflow and resulting efficiency savings. 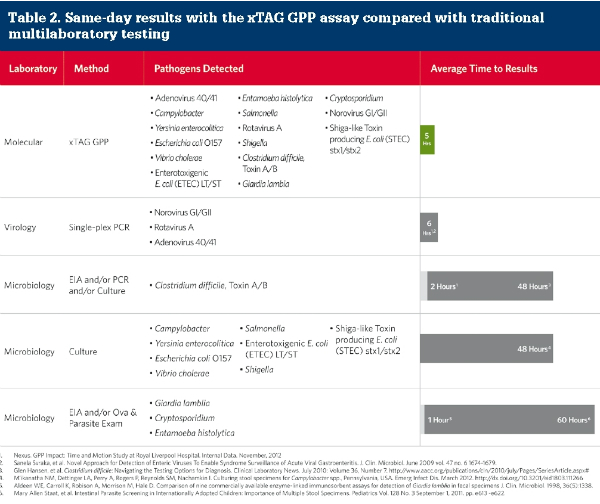