The use of cone-beam CT imaging, with its ability to provide undistorted 3D views of dentition, is particularly useful when dealing with bone-related pathologies. Experts from the Clinic for Maxillofacial Surgery, Faculty of Stomatology, University of Belgrade, Serbia, outline its utility in diagnosis, treatment planning and follow-up.

Standard panoramic radiography has diagnostic limitations in the anterior part of the lower jaw due to superimposition of the spine. Computed tomography (CT) is usually the method of choice for accurate diagnosis in such cases.

With regard to mandibular fractures, it has been stated that cone-beam CT (CBCT) is superior to standard and panoramic radiography in detection of condylar and coronoid fractures, and fractures of the anterior part of the mandible.

It was found that CBCT was useful to detect unfavourable sagittal split fractures of the mandible, which is necessary for accurate treatment planning and screw placement.

Although it is reasonable to assume that CBCT would perform similarly to multislice CT in the diagnosis of mandibular fractures, it is potentially more beneficial for the patient due to the lower radiation dose and cost in than is associated with CT.

A 65-year-old patient who suffered a serious trauma in a car accident showed up at the clinic with haematoma and swelling on the left cheek and neck with strongly expressed trismus. Intra-oral examination showed an open wound with blood clots on the floor of the mouth. Palpatory found severe pain; mandibular fragments were mobile with present crepitations.

The third, axial, dimension of CBCT revealed the longitudinal fracture line, which went through the mandibular body from lingual to buccal. Thanks to CBCT, it was possible to develop an adequate treatment plan - open reduction and internal fixation (ORIF) with two bicortical screws and one miniplate positioned in the correct manner.

Post-operative CBCT showed the mandibular fragments in anatomical position with osteosynthesis material placed. An additionally acquired CBCT showed that the lingual splaying was avoided, which could not be seen in the panoramic radiograph.

The diagnostic value of CBCT technology could help to identify additional features of mandibular fractures and could influence the modality of treatment, where conventional techniques (such as panoramic radiographs) could be associated with numerous limitations, such as superimposition, blurring and distortion of anatomical structures.

All the images for the diagnosis in the treatment planning and post-operative follow-up of the case described here were acquired by the SCANORA 3Dx system from SOREDEX. 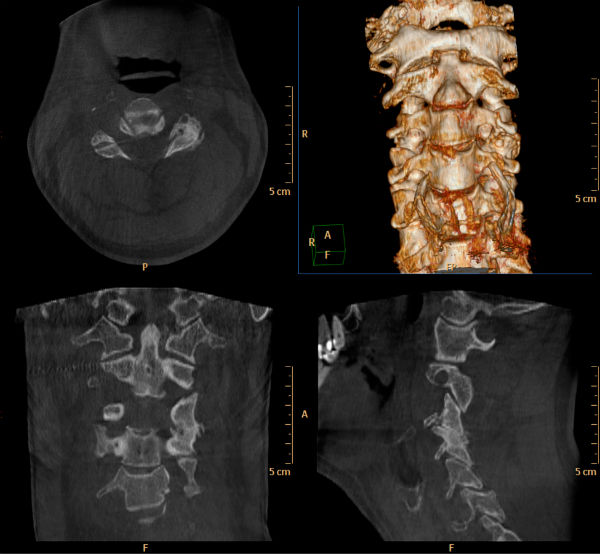 A CBCT image taken from a middle-aged male shows severe arthrosis of the facet joint as well as mass in the axial, coronal and sagittal planes.