Roche Molecular Diagnostics - The road ahead for antimicrobial resistance

The fight against antimicrobial resistance is reaching a new pitch, as researchers around the world struggle to find ways to rapidly diagnose infection and isolate bacteria that have long been treated with conventional antibiotics. Roche Molecular Diagnostics is among those committed to the fight. Practical Patient Care talks to Professor David Livermore of the University of East Anglia and Dr Rafael Canton of the Hospital Universitario Ramón y Cajal in Madrid about the scale of the problem, and how recent breakthroughs may yet turn the course of the war.

In the beginning, there was Salvarsan. At the turn of the 20th century, German chemist Paul Ehrlich observed that aniline, a type of dye, could stain specific types of bacteria. From this, Ehrlich deduced that artificially synthesised chemical compounds could be used to eliminate specific bacteria within an afflicted patient without harming them.

In 1904, he attempted to test this theory by screening for a new drug that would treat syphilis. After over 600 tests using derivatives of the drug Atoxyl in rabbits infected with the disease, Ehrlich and his colleagues hit upon a cure. Marketed as Salvarsan - and, thereafter, in its less toxic form, Neosalvarsan - it remained the primary treatment for syphilis until penicillin was eventually developed in the late 1940s.

The rise of resistance

The birth of antibiotics sparked a revolution in the way clinicians could treat infection and approach complex surgical operations. Yet, almost as soon as it became clear that certain bacteria could inhibit and eliminate the growth of others, it was also discovered that their targets could mutate or acquire resistance by gene transfer from other bacteria.

For a long time, this wasn't a problem: mutation rates remained low and new antibiotics were consistently being devised. However, by the mid-1980s, this development pipeline had largely dried out. Pharmaceutical companies found that research into new antibiotics was no longer profitable and, without new variants, medical practitioners were forced to rely on an unchanging roster of antibiotics of varying effectiveness.

Consequently, incidences of antimicrobial resistance to specific antibiotics began to rise, culminating in the appearance and proliferation of 'superbugs' like carbapenem-resistant Enterobacteriaceae (CRE) and methicillin-resistant Staphylococcus aureus (MRSA), literally named for their ability to fend off commonly used antibiotics. Researchers into antimicrobial resistance are now being forced to confront new and unpleasant eventualities in unexpected places.

In 2015, an article in The Lancet Infectious Diseases announced the discovery by Chinese scientists of gene mcr-1 that made host bacteria resistant to Colistin. Although this antibiotic has nephro and neuro-toxic issues, it is frequently used only as a drug of last resort. Last year, in Nevada, a woman died after being infected with a form of Klebsiella pneumoniae resistant to all available antimicrobial drugs.

The proof's in the prescription

According to Professor David Livermore, the lack of new antibiotics being developed is only part of the problem. Formerly the director of the Antibiotic Resistance Monitoring and Reference Laboratory at the Health Protection Agency, 1998-2011, Livermore is one of the UK's foremost experts on antimicrobial resistance.

A few years ago, he told the Guardian that what matters is "either engineering a flow of new compounds or changing the nature of antimicrobial treatment in such a way that we select much less resistance than we have in the past." Livermore doesn't believe the situation has vastly changed. He routinely compares the way in which doctors prescribe antibiotics to carpet-bombing.

"If you knew what the pathogen was earlier, it would be possible to prescribe something much narrower on the antibiotic spectrum," explains Livermore. "That way, in targeting against the specific pathogen, it would treat the patient appropriately, cause less disruption to the patient's gut flora, and be better from a public health standpoint. This, needless to say, is contingent on getting much faster diagnostics."

The demand for rapid diagnostics in targeting antimicrobial resistance is one Dr Rafael Canton is in broad agreement with. As the director of the microbiology department at the Hospital Universitario Ramón y Cajal, Canton is tasked with maintaining the bacteriological health of 600,000 of Madrid's inhabitants. He believes some of the most promising areas of research in antimicrobial resistance lie in rapid diagnostics.

"The problem is that antibiotic-susceptibility testing takes time," says Canton, referring to the 48-72-hour period it usually takes to conduct the necessary analysis of culture and susceptibility testing in the lab. "And this is normal, because we have to let the bacteria grow, and we cannot do any better with a standard procedure."

However, Canton is excited about several avenues of research that may lead to the testing period potentially being cut down to a matter of hours, including mass spectrometry techniques and rapid molecular testing, whereby the genes known to trigger resistance to certain types of antibiotics are quickly identified in the bacteria under analysis or even directly in patients' specimens.

"In the future - let's say in five years' time, or even less - we are going to be able to rely on these kinds of technologies in a routine way," he asserts. "There are so many efforts under way from different companies and academia in this area of diagnosis."

It is a sense of optimism that Livermore shares. Areas of investigation he is particularly excited about include mounting interest among researchers in exploring how human biomarkers can better distinguish between bacterial and viral infections. Another is the use of new PCR-based methodologies in screening for specific bacteria, an avenue of rapid diagnosis increasingly used to pinpoint MRSA or CRE infections.

"Then, you've got companies like Accelerate in Tucson, Arizona, that are looking at rapid phenotypic susceptibility testing," says Livermore. "Essentially, the patient's blood is taken and incubated in the blood-culture instrument. As soon as it flags the blood culture as positive, the growth is transferred to chambers with a thin layer of agar containing antibiotics, which are repeatedly imaged under a microscope to capture the early response of the bacteria to the antibiotics. By doing that, you can get a susceptibility result within about seven hours, instead of overnight."

At the University of East Anglia, Livermore and his colleagues have also enjoyed success in sequencing bacteria directly from clinical specimens. "We've been quite successful in sequencing [bacteria] from complicated urinary tract infections," he explains. "So, now, you could obtain a complete profile of the organism and its resistance within hours, directly from the urine."

The one thing Livermore worries about when it comes to these kinds of systems is that, compared with existing systems, they're low throughput.

"They will be better at aiding the individual patient than they will be at rapidly impacting on the totality of societal use of antibiotics," he says. "And that's a big caveat."

It's an implication that touches upon the wider crisis still posed to the world by antimicrobial resistance. While advances have been made in susceptibility testing and the development of new antibiotics - Gepotidacin, first discovered by GlaxoSmithKline in 2007, is active against MRSA and drug-resistant E. coli - progress has been fitful. Even with government-sponsored prizes designed to encourage further innovation in the antibiotic field, it still costs hundreds of millions of dollars to develop a viable drug.

The pharmaceutical industry is, in many ways, still facing the same challenges in antibiotic development that stunted its research in the 1980s. For Canton, a return to this situation is something that hospitals cannot afford.

"People have to understand that many of the procedures we are able to undertake were only made possible with antibiotics," he asserts, with this ranging from shoring up a patient's immune system to ensuring that their body does not reject transplanted organs. "It's going to be a dramatic reckoning in the future if we do not address this problem of antibiotic resistance." 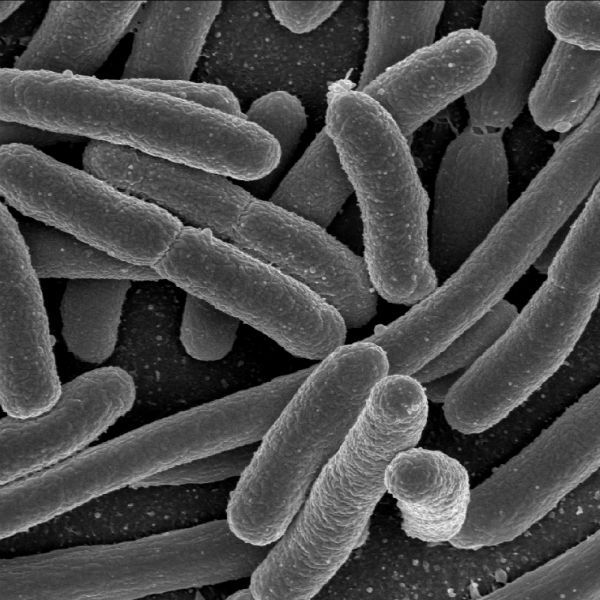 Scanning electron micrograph of E. coli, grown in culture and adhered to a cover slip.