OXFORD, England -- Oxitec Ltd, a leading developer of biological pest control solutions, today announced the scientific publication of results from groundbreaking large-scale pilot releases of its new male-only, female-lethal Friendly™ Aedes aegypti solution in the Brazilian city of Indaiatuba. Deployments of non-biting male Friendly™ Aedes aegypti over 11 months in densely populated, dengue-impacted urban communities led to significant suppression of the resident pest Aedes aegypti population by up to 96%. This level of efficacy against a difficult-to-control, disease-spreading mosquito, demonstrated in 2018 and 2019, laid the groundwork for a new class of mosquito control products that use the Friendly™ Aedes aegypti technology in simple, scalable, "just-add-water" form factors that require no special training to deploy. Those products are being launched commercially in Brazil right now. 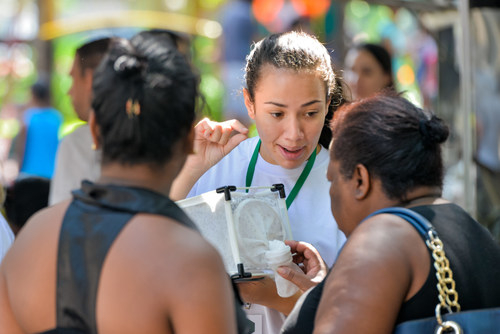 Published in the peer-reviewed scientific journal, Frontiers in Bioengineering and Biotechnology, the study tested two different doses of Friendly™ male mosquitoes deployed in densely populated neighborhoods in Indaiatuba. Resident pest populations of the Aedes aegypti mosquito were monitored over time in these communities, and their abundance was compared with populations in other neighborhoods that did not receive Friendly™ male mosquitoes. During the peak mosquito season (November 2018 to April 2019) treated mosquito populations were suppressed by 88% and 96%, relative to those in untreated areas.

These successful pilots preceded commercial deployments of the Friendly™ Aedes aegypti product, which is shipped as packaged eggs to customers in a just-add-water device. After placement in a mosquito-affected area, water is added and within days non-biting Friendly™ males emerge to find and mate with pest female Aedes aegypti mosquitoes. As their female offspring cannot survive, season-long placement of these boxes leads to effective, safe and targeted reduction of local Aedes aegypti mosquitoes. Approved by Brazilian government regulators in 2020, the product is now sold to businesses and households to combat Aedes aegypti, which spreads the dangerous viral diseases dengue, Zika, chikungunya and yellow fever.

Oxitec's Chief Executive Officer, Grey Frandsen, commented that "the publication of these groundbreaking results provides yet another validation of our Friendly™ Aedes aegypti solution as an effective, and now – importantly – scalable mosquito control tool. We now offer the world's safest, most sustainable, most targeted and most effective product to combat the disease-spreading Aedes aegypti mosquito. As this solution is made available to households, communities, cities and businesses across Brazil, we're excited about delivering impact throughout the country with a broad range of stakeholders, and about the promise this demonstrates for even wider-scale impact against mosquitoes around the world. More exciting announcements are coming soon."

Natalia Ferreira, Oxitec Brazil's director, said "Dengue presents such an everyday threat to communities across Brazil. I'm immensely proud of my team, based in São Paulo state, for their part in demonstrating the unparalleled effectiveness of Friendly™ Aedes aegypti in combating the mosquito responsible for most dengue transmission in Brazil. Our focus now is to deliver national impact by ensuring that we provide world-class products to our rapidly expanding customer base across Brazil."