Technological limitations and a conservative mindset among health professionals have meant that smart wound dressings are yet to be commercialised. Elly Earls speaks with Conor O’Mahony at the Tyndall National Institute and Dr Marta Tessarolo of the University of Bologna about how we could soon reach a tipping point where technology and user need come together.

A wound can be a battleground if it is severe enough, or if the natural healing mechanisms of the body are compromised by disease. In the clinic, specialists take up arms in the form of surgical interventions and advanced dressings against bacteria that attempt to colonise the area and reproduce. The current standard of care involves assessing wounds mostly by looking at them and using the TIME framework to make decisions. But what if clinicians could monitor a wound without lifting a dressing and interrupting the process, while also gaining information to better inform clinical decisions?

Conor O’Mahony is a principal researcher with the Tyndall National Institute in Ireland where he has been involved in microsystems design and fabrication for more than two decades – and he is attempting to do just this. The ‘smart dressing’ he and his colleagues are developing can measure moisture to monitor when the wound dressing is full and needs changing, as well as the rate of exudation, a key metric needed to understand the healing status. This data can be reported wirelessly back to a clinician, enabling them to remotely monitor the condition of the wound without intrusively inspecting it, potentially reducing the amount of time patients need to spend in hospital, as well as the associated nursing hours.

O’Mahony’s areas of expertise range from environmental monitoring to telecommunications and autonomous wound care – where he is involved in developing sensors and transducers that can interact with the outermost skin layers in a minimally invasive way. Remarkably though, it is wound care where these electronic components have been exploited the least. Part of the reason for the slow adoption of smart dressings is that, until very recently, the electronics and sensors needed to measure the healing of a wound and report back wirelessly to health professionals have not been cheap, flexible or low-profile enough to integrate into bandages. The systems have also been too power hungry. Disposal of contaminated electronic devices has been an additional challenge. However, many of these issues are now being overcome.

“Disruptive technologies such as biodegradable materials, flexible electronics and incinerable batteries have the potential to be used in smart wound dressings that could ultimately revolutionise the manner in which we care for chronic wounds.”

O’Mahony also notes that new procedures will be needed alongside these kinds of smart medtech products. Usually doctors and nurses visually inspect wounds to check how they are healing. And while these bandages would have a long-term benefit, many just see the short-term issues of integrating them into an established way of working.

“Anything new is obviously quite challenging to treatment methods that have been best practice for decades,” O’Mahony says. “However, disruptive technologies such as biodegradable materials, flexible electronics and incinerable batteries have the potential to be used in smart wound dressings that could ultimately revolutionise the manner in which we care for chronic wounds”.

Dr Marta Tessarolo of the University of Bologna is another researcher who, together with her research group of physicists and chemists led by Professors Beatrice Fraboni and Erika Scavetta, has developed a ‘smart bandage’, containing a sensor that can very sensitively measure wound moisture levels and transmit the data to a smartphone via radiofrequency identification (RFID) technology. The use of RFID was partly inspired by a trip to sporting goods retailer Decathlon, where there is no need for customers to stop at the till to pay thanks to a similar technology.

Tessarolo agrees that while there are still technological hurdles to tackle – building sensors that are biocompatible with the skin is no easy task, nor is bringing together the different companies needed to fabricate a ‘smart’ dressing – her biggest challenge is finding clinicians willing to test these devices in a trial setting.

“They are used to certain clinical procedures and it’s difficult to get them to try new sensors that are in the research process, but we need to do this to understand which sensors we need to include and which parameters are the most interesting to know,” she says. “We have to convince doctors that it will be an improvement on standard procedures.”

O’Mahony has had similar feedback from focus groups. “Many nurses don’t want an additional reader or a smartphone on their trolley, which is more hardware. It’s another procedure for them to do on their already busy rounds,” he says. “In addition, it involves passing the scanner from bed to bed, potentially increasing infection control risk, something that we didn't really consider but they were quite adamant about.”

While O’Mahony and his colleagues are looking at alternatives, such as low-power and long-range Bluetooth technology, he says both sides must be realistic. “There’s a joint push-pull here. Nurses and clinical staff will have to realise they can’t have an ‘ideal’ dressing, while biomedical scientists and engineers must be cognisant of the real-world challenge facing caregivers,” he says. “But we’re grateful for their feedback, and many clinicians are eagerly assisting with technology development”.

Indeed, he is optimistic that when clinicians see the benefit of contactless technology and remote, non-invasive monitoring, they will change their way of thinking. “They’re very keen on the concept – anything that reduces work is obviously a positive thing for them,” he says “Many nurses are very responsive and we’re also seeing a new generation of people coming through who are very familiar with technology, who grew up with contactless scanning, smartphones, Google Pay and so on. Things have changed a lot.”

The attitudes of other healthcare stakeholders are also starting to evolve. “When we first started in this field, we saw a lot of concern about the additional cost associated with integrating smart electronics into conventional dressings. Now, it’s becoming clear to manufacturers, national health boards and health insurance providers that the downstream savings associated with faster wound healing and lower bed occupancy are enormous,” O’Mahony says.

In Ireland, a hospital bed costs about €306,000 per year to run, while changing a dressing adds up to well over €100 in nursing time and resources. “When you factor in the overheads, the materials, the clinical time, it’s very expensive,” O’Mahony says. “Convincing the companies, reimbursement agencies and health boards that downstream savings must be paid for up front has been challenging. But the mindset is changing, especially due to the evolution from ‘pay-for- care’ to ‘pay-for-cure’ reimbursement models.”

The technological limitations that have hindered the development of the field until now are slowly being stripped away, according to O’Mahony. “There are quite a lot of ultra-flexible printed electronics out there now, which is very exciting,” he says. “They’re becoming available on medical-grade materials with low profiles so you can put them in a wound dressing without the patient knowing they’re there.”

Although for Tessarolo, the patient is not the problem. “If they can have something personalised for them, which improves the procedures for their specific problem, they are happy to have an additional sensor in their bandage,” she remarks.

Her group is also investigating new parameters to measure wound healing such as pH, which has been shown to correlate with the healing stages of a wound, potentially giving clinicians direct access to the status of a wound without disturbing the wound bed.

While it is not as far along as the group’s research on moisture level measurement, their device, which integrates a sensing layer including a two-terminal pH sensor and iridium oxide particles, and an absorbent layer ensuring the delivery of a continuous wound exudate flow across the sensor area, was successfully validated in flow analysis using synthetic wound exudate.

“The holy grail is pH sensing,” O’Mahony says. “But pH sensors are not there yet. They're not stable enough, small enough or calibration-free enough for commercial adoption in wound dressings. But it’s certainly a very hot topic, and one that is being pursued by many research teams worldwide.”

At the Tyndall Institute, their most advanced smart dressing was designed so that new sensors can be added when technologies such as pH monitoring become viable. O’Mahony and his colleagues are also looking into sensors that can measure the infection levels of wounds and alert the clinician when needed, as well as technology that could stimulate the wound bed by passing low-level currents through it to promote healing.

Biodegradable materials are another area of interest. “The circular economy is becoming a massive focus for many medical device companies. Disposable devices will soon go the way of the paper coffee cup. It will become socially unacceptable to bin or burn medical devices without good reason,” O’Mahony says.

He believes that consumer sentiment will just accelerate this shift. “If you could envision a biodegradable circuit with an RFID antenna in there, suddenly the entire thing is battery-free, there's no power and you can put it in the incinerator or even composter afterward,” he says. “I think that’s where the field is going to go.”

“If the patient can have something personalised for them, which improves the procedures for their specific problem, they are happy to have an additional sensor in their bandage.”

Meanwhile Tessarolo’s group is interested in the potential of artificial intelligence and machine learning and hopes to eventually combine several sensors to give a more specific report on what is happening under a dressing.

The final major barrier, of course, is the regulatory process. “These are full-blown medical devices and it takes several years for something to get through the regulators and reach commercialisation,” O’Mahony says. And yet he feels like we may be on the cusp of significant advancement in wound healing technology.

“I do sense that there might be a very rapid coming together of technology readiness and user needs at some stage fairly soon,” he predicts. “There's always a tipping point I think where many of these technologies are simultaneously being developed and then they could all become ready for commercial deployment together. We could see a big progression when that point is reached, and the future is certainly bright for smart wound dressing technologies.” 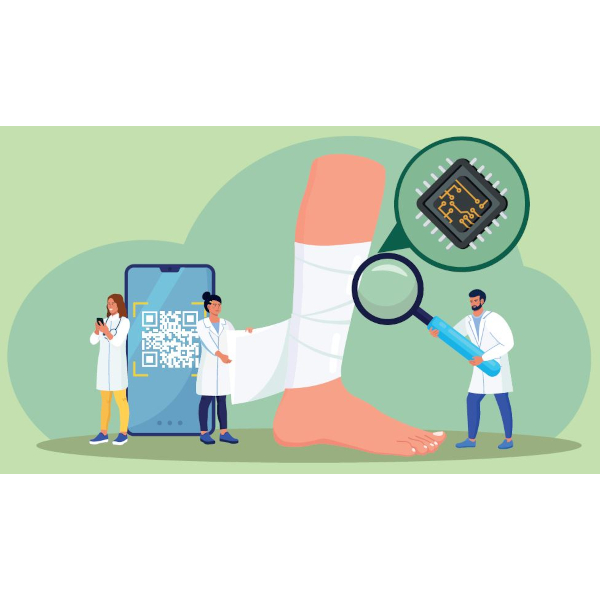 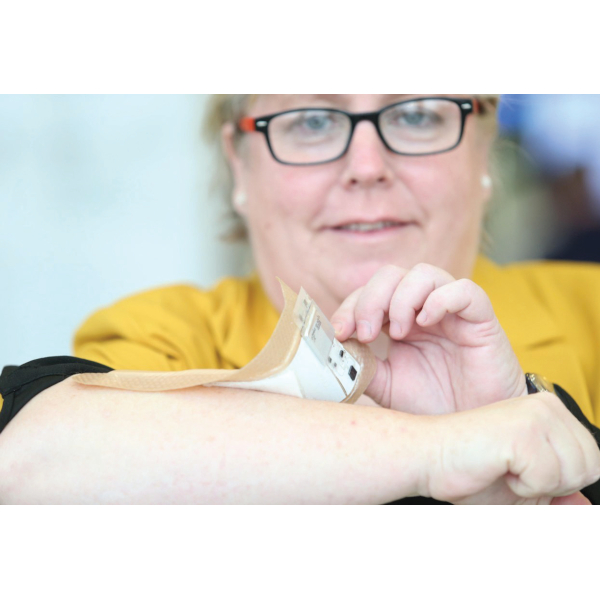 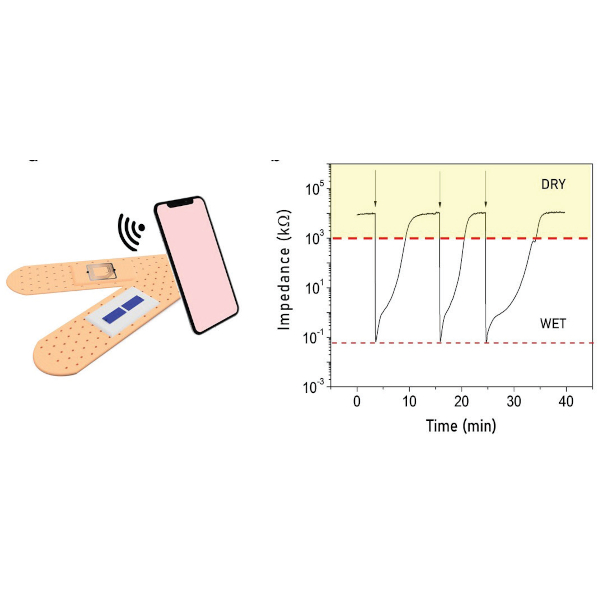 Diagram showing how the team at the University of Bologna’s smart dressing works using RFID.
Post to: