The Covid-19 pandemic provided the impetus for unprecedented speed in the development of testing methods, as the industry collaborated, and regulators worldwide supported their efforts with emergency approval pathways. But now we’ve seen what’s possible under the right circumstances, is there any going back to the way things were before? Abi Millar speaks to Karen Taylor, director of the UK Centre for Health Solutions at Deloitte, and Matthew Binnicker, director of clinical virology at the Mayo Clinic, to find out what the future of diagnostic testing for infectious diseases could look like.

Before the pandemic, infectious disease testing was not considered an everyday part of life. If ever such tests were needed, they took place in a medical setting and under very specific circumstances. They were treated as an individual issue, rather than as a population-wide screening tool.

The changes forced by Covid-19 were unprecedented to say the least. As part of their public health response, many countries posted out free rapid antigen tests to anyone who wanted them. The UK Government provided more than two billion tests over a two-year period, with delivery capacity peaking at nearly a million kits per day.

Mass testing on this scale, given the price tag, was probably never going to become a feature of life over the longer term. Equally, there’s no going back to how things were in 2019. Covid-19 has shown us exactly what can be achieved in times of crisis, with new technologies rolled out more quickly and extensively than previously thought possible.

“The pandemic catalysed innovation across the healthcare and life science industry,” comments Karen Taylor, director of the UK Centre for Health Solutions at Deloitte. “It saw the rapid development and widespread adoption of diagnostic tests for Covid-19, with ‘lateral flow’ and ‘PCR’ tests becoming household names, and selfsampling becoming an accepted approach.”

Matthew Binnicker, director of clinical virology at the Mayo Clinic, recalls how in the early days of the pandemic, the diagnostics community was gripped with a real sense of urgency.

“In mid-February 2020, we were watching the emergence of Covid-19, and trying to decide whether to develop a test to identify cases,” he says. “We knew that if we did, we needed to bring it up in less than four weeks, just because of the likelihood that there would be cases impacting our patients and physicians.”

The Mayo Clinic pulled together a team of 15 people, who worked on developing and validating a diagnostic. They were able to reach that point within three weeks – a far cry from the 6–12 months that would be typical in such situations.

“That was just one example of a team of people coming together to meet an urgent need in a very, very short amount of time,” says Binnicker. “It played out in other ways with other companies – many companies have brought up Covid-19 tests, and other infectious disease tests, over the course of the past two-and-a-half years in a way we probably haven’t experienced before.”

Many of us can remember that sense, so common in 2020, of being united over a shared adversary. In the life sciences industry, this meant embracing a spirit of collaboration, with different companies working together to pool expertise. On the governmental side, it meant a willingness to cut red tape and speed up regulatory processes.

“One silver lining to the pandemic has been the openness among different companies to come together to bring up new testing solutions in a faster time frame,” says Binnicker. “There’s also more openness from agencies like the FDA to partner with diagnostic test manufacturers and clinical laboratories.” Taylor adds that, with large numbers of the population contracting Covid-19, clinical researchers had more scope than usual to test out new technologies and treatments. Governments also had more data at their disposal, which helped them target their overall response to the pandemic.

“A notable example of diagnostic advancement is the widespread use of genomic sequencing to identify variants and track the spread of the virus, with the UK leading in these efforts,” she says.

“The pandemic catalysed innovation across the healthcare and life science industry.”

The number of rapid antigen tests provided by the UK Government over a two-year period, with delivery capacity peaking at nearly a million kits per day.

In many ways, the past few years have been a triumph for open science. So now that we’ve seen what’s possible, might this collaborative environment – bolstered with regulatory support – be here to stay? And might we be entering an era of accelerated innovation, in which protracted timelines are a thing of the past and new diagnostics appear within weeks?

As Binnicker sees it, the answer is ‘yes and no’. On one hand, the infectious disease community will have learned some lessons from Covid-19. If you’re developing a new diagnostic, you’ll know which parts of the process are truly necessary, and which steps are likely to be redundant. On the other hand, you won’t have the same incentive to hurry as you would during a public health emergency.

“Many of these tests can be developed and studied over longer periods of time, because there's not that sense of urgency,” he says. “That being said, things will have changed – we will learn some lessons and hopefully improve the process moving forward.”

An interesting case in point here might be monkeypox, which first cropped up in Europe in May 2022. Only a few weeks after the first cases emerged, Swiss drugmaker Roche had completed three separate PCR tests for the virus. Several other companies followed suit. Arguably, this rapid development would not have been possible without the experience gained during the pandemic.

Of course, as well as looking at what worked, it’ll be important to pay attention to what didn’t. In 2020, test manufacturers focused their production on Covid- 19 tests – an understandable decision, but one that impacted their capacity more broadly. Faced with reagent shortages, many labs stopped manufacturing tests for sexually transmitted infections. On top of that, with so many different tests in development, the FDA and other governmental agencies were overwhelmed with submissions. It was reported that the FDA was ‘working around the clock’ on Covid-related activities, which ‘adversely impacted’ the rest of its workload.

“One silver lining to the pandemic has been the openness among different companies to come together to bring up new testing solutions in a faster time frame.”

The number of people who worked on developing and validating a Covid-19 diagnostic within three weeks.

“Hopefully moving forward, whether that be through government support, or the test manufacturers building some flexibility into their system, we won’t see as many disruptions as we did in the early days of the pandemic,” says Binnicker. “We also need more funding and resources for agencies that are reviewing new diagnostic tests.”

Taylor adds that we need improvements in our digital infrastructure, making it easier to securely share data between different parts of the healthcare system.

“Further adoption of cloud and blockchain technologies could improve the cybersecurity of health data,” she says.

In other words, there are still quite a few obstacles in the way when it comes to getting new technologies off the ground. But that’s not to say the pandemic hasn’t changed the diagnostics space for good.

One big change, which does appear to be sticking, is the move towards home testing methods and at-home collection methodologies. This ties in with the broader push towards telehealth and remote monitoring – healthcare doesn’t have to be confined to the doctor’s office, but can be taken into the patient’s own hands.

“One area the pandemic has highlighted is the ability of the public to self-sample and carry out their own tests,” says Taylor. “This could have a significant impact on how disease screening and infectious disease testing is carried out going forward. Patient awareness and engagement with their health have also increased – there is now a real awareness and demand for convenient diagnostic testing.”

Binnicker believes that, post-pandemic, there will be a whole new space to fill in infectious disease testing. This might include home-based tests for sexually transmitted or respiratory infections.

“There will be a demand for more accurate test options that individuals can perform from the comfort of home – I see that as the next era of infectious disease diagnostics,” he says.

At the same time, it will be crucial to develop systems around joined-up care, ensuring that the test results make their way to that person’s provider. Binnicker points out that, in many situations, a positive result isn’t being tracked. That means closing the gap between the patient and their healthcare team is going to be essential.

Taylor remarks that the use of PCR and lateral flow technologies has grown significantly. We will soon see opportunities to apply this infrastructure across different disease areas – and even ongoing issues like antimicrobial resistance. The same applies to genomic sequencing, which has really proved its mettle as a public health tool.

“Overall, the changes we are seeing in diagnostics have the potential to provide faster and more effective services,” she says. “Many of the diagnostic technologies developed as part of the pandemic response are platform technologies that could be used for other areas of infectious disease testing.”

Of course, we are not out of the woods yet with Covid-19. We face the prospect of another difficult winter, marked by high levels of flu and respiratory syncytial virus as well as Covid. With new threats emerging all the time, the ‘new normal’ seems to involve a large element of unpredictability. If the diagnostics community can harness lessons learned during this period, healthcare systems will be well equipped to face whatever challenges are coming their way. 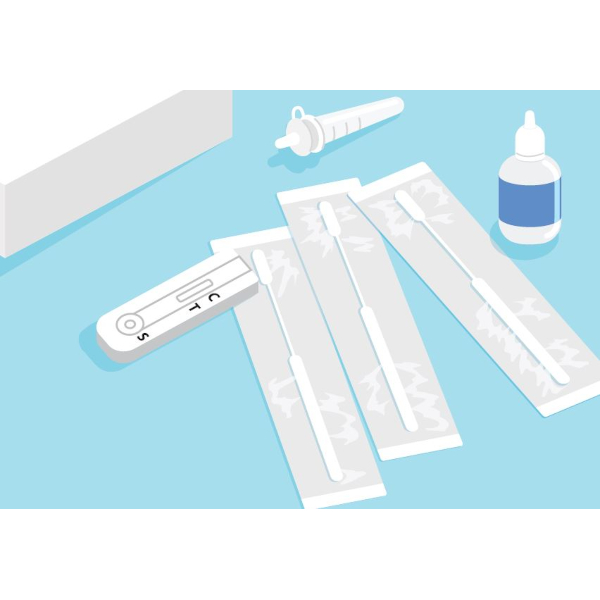 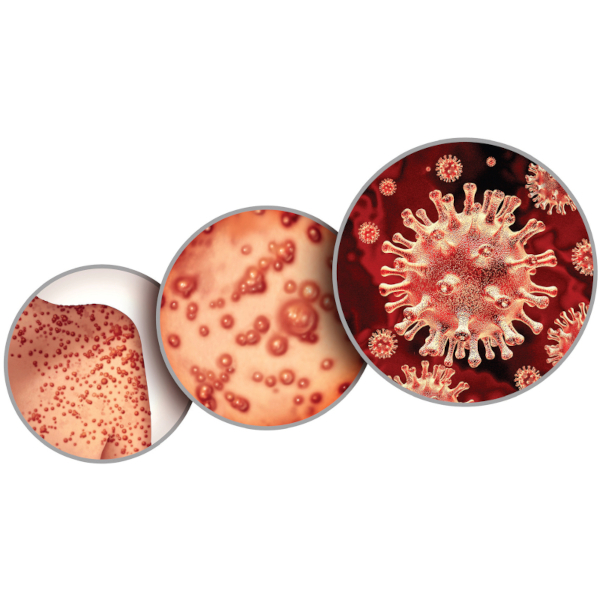 Monkeypox first appeared in Europe in May 2022. 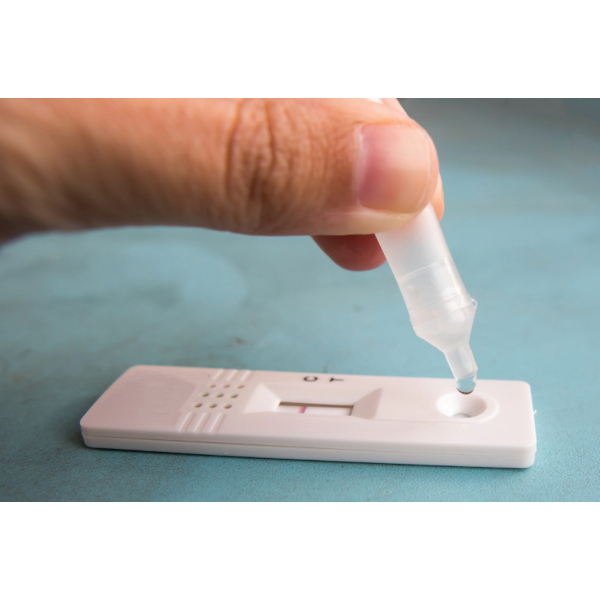 Healthcare is no longer confined to the doctor's office due to a revolution in at-home testing.
Post to: