While bacteria are responsible for a laundry list of diseases, they have their own enemy in the form of bacteriophages (viruses that infect bacteria). In turn, bacteriophages might be used to detect their host bacteria and aid in diagnosing disease. Abi Millar speaks to Dr Thomas Edwards, a post-doctoral research assistant at the Liverpool School of Tropical Medicine, and Dr Cath Rees, professor of microbiology at the University of Nottingham, to discover how research teams are using phages as a diagnostic tool.

Might bacteriophages – viruses that selectively infect bacteria – one day be used to diagnose diseases? It might sound like a reach, but bacteriophages (also known simply as phages) are starting to generate a buzz among the research community.

First discovered more than a century ago, phages are the most abundant organisms on earth. There are thought to be around ten million trillion trillion of them on the planet – a figure that far eclipses the number of stars in the universe. They can be found in any environment in which bacteria grow, including water, soil and the human gut.

From a diagnostic perspective, the promise is clear. These tiny pathogens, whose name translates to ‘bacteria eaters’ due to their ability to completely destroy bacterial cells, have each evolved to infect a specific host. In some cases, this would be an entire bacterial species; in other cases, it would be a certain strain within a species.

“If we can detect these specific phage infection events, it’s a way of letting us know what type of bacterial cell is present in a sample,” says Dr Cath Rees, professor of microbiology at the University of Nottingham. “It means you don’t have to grow the bacteria to levels where you can use traditional microbiological methods to detect them.”

This isn’t an altogether new idea. In fact, phages have long been used in epidemiology as a means of identifying bacterial strains. After taking a bacterial sample, you apply a panel of phages known to infect that species. The sample will show a pattern of susceptibility and resistance, which can be matched up with a given strain.

Phage detection is also commonly used to determine levels of water pollution – if a certain phage is present, that suggests its host is present too. Since phages replicate much faster than bacteria, this can be a quick way to detect contaminants.

Another line of research involves genetically modifying the phages, so that they produce a luminescent molecule when they infect their host. Researchers can track the resulting signal, helping them identify bacteria in a sample.

“In my lab, we are detecting the increase of phage replication using molecular diagnostics,” says Dr Thomas Edwards, a post-doctoral research assistant at the Liverpool School of Tropical Medicine. “It’s very hard to detect a single bacterium in a blood sample using molecular testing, but we are finding it easier to detect 100 phages becoming 1,000 as they replicate through that cell.”

Ultimately, he thinks phage-based diagnostics could be a game changer. As well as being time efficient, these methods are highly sensitive and specific. They can also distinguish between live or dead bacteria. This means a lower risk of false positives, as they won’t flag up an infection that has already cleared.

“Assays to sensitively detect bacterial bloodstream infections, without the 24–48-hour delay posed by blood cultures, could revolutionise clinical microbiology,” he says. “Using phages in this manner only requires a one-hour incubation, followed by a PCR-based assay.”

His team have also used phages to detect antibiotic resistance. Since a phage will not replicate in a dead bacterial cell, the presence of phages may indicate that the antibiotics aren’t doing their job.

The difficulties with diagnostics

Given their many noted advantages, it is perhaps surprising that phages haven’t been more widely exploited within diagnostics. To date, very few phage-based tests have reached the point of clinical usage.

As Rees explains, these types of tests have been in development for more than 30 years. However, since each phage, host and application is different, progress has been slow. Each research group is effectively starting from scratch, without that pool of shared knowledge to draw from.

“There have only been small numbers of scientists who have focused on phages, which are specific for each of the different types of bacteria,” she says. “In comparison, PCR-based methods use the same basic technique to detect a whole range of different bacteria, so there have been hundreds of different groups and companies working on developing the methods. This has moved the science on very quickly.”

On top of that, bacteria have evolved a wide range of defence mechanisms to guard against phage infection.

“To that end, many groups are working towards better mapping these defences, developing inhibitors, and also evolving phages to have increased host range,” says Edwards.

Even once you get past these basic science barriers, getting the funding to commercialise new tests is often tricky. The regulatory process can be complicated too, given that the phages are biological organisms.

“The financial returns could be great being the first, but it could also prove to be a flop, and investors risk losing all their money! It’s much easier to make a financial case if others have come before you,” says Rees.

Together with fellow researchers at the University of Nottingham, and their spin-off company PBD Biotech, Rees is working on a new phage-based diagnostic called Actiphage. This test targets mycobacterial cells – the bacteria that cause TB in humans, and bovine TB or Johne’s disease in cattle.

“It’s very hard to detect a single bacterium in a blood sample using molecular testing, but we are finding it easier to detect 100 phages becoming 1,000 as they replicate through that cell.”

“Mycobacteria are very different to other commonly known bacteria that cause infections, like Staphylococcus aureus, Salmonella or E. coli,” says Rees. “The cell walls of mycobacteria are coated in a waxy material. This makes them very difficult to break open using the normal sorts of methods that we use to extract DNA from cells.”

With the Actiphage test, the phage will infect any mycobacteria that are present in a sample. The phage then copies itself, before producing enzymes that break open the cells – a process known as cell lysis. Once that happens, the DNA is released and a PCR test is used to detect which type of mycobacteria has been infected.

“In effect, we are using the phage as a novel way to break open these cells efficiently, so we are able to use standard PCR to detect their DNA,” says Rees.

“It seems scientists have always been quite sceptical about new ideas, and sometimes it has felt like pushing water uphill trying to get phage-based diagnostics off the ground.”

The number of years it took for PCR-based tests to become widely accepted and routinely used as a diagnostic method.

The key to diagnosis

Ultimately, Actiphage could be used to diagnose human TB by detecting mycobacteria from blood samples. It could even identify latent (asymptomatic) infections, which current diagnostics often miss. This means the infection could be treated at an early stage before it starts to cause obvious symptoms.

“People who have been exposed to TB may produce a detectable immune response, but very few go on to develop active disease,” says Rees. “What we have found, using Actiphage, is that patients that had detectable levels of Mycobacterium tuberculosis in their blood were those that were most likely to progress to active cases of TB, even if they had no other clinical signs of infection.”

Embark on the journey towards acceptance

Actiphage is still in development when it comes to human diseases, and the team will need to complete additional trials before they can move towards commercialisation. However, it is already being used to detect Johne’s disease – a serious wasting condition in cattle.

“This is on a very small scale, but we are moving towards the point where we can sell the tests to veterinary diagnostic labs so that the tests are more widely available,” says Rees.

Through their work on Actiphage, the researchers have been emboldened to ask new questions about TB itself. This may help not just with diagnostics, but also with the development of new treatments or control strategies.

“There are lots of new areas of fundamental research where we hope Actiphage will be useful for the wider scientific community,” says Rees.

With regard to phage-based diagnostics more generally, Rees believes they are slowly but surely moving towards the scientific mainstream. She cites JBS Haldane’s Four Stages of Acceptance for Scientific Ideas, which starts with stage 1 – ‘this is worthless nonsense’, and moves towards stage 4 – ‘I always said so!’.

Currently, she believes phage-based diagnostics are somewhere between stage 2 and 3 (‘this is an interesting, but perverse, point of view’ and ‘this is true, but quite unimportant’). After all, it took about 20 years for PCR-based tests to become widely accepted and routinely used as a diagnostic method – so why wouldn’t phage tests follow the same trajectory?

“It seems scientists have always been quite sceptical about new ideas, and sometimes it has felt like pushing water uphill trying to get phage-based diagnostics off the ground,” she says. “Hopefully within the next 20 years, phage-based diagnostics will have become well established, not only for detecting mycobacteria but also for detecting other types of bacteria that are difficult to detect by traditional methods.”

Although it is still very much early days for this line of enquiry, and it is likely to take years before phage-based diagnostics are considered mainstream, there is justifiable excitement among the pioneers in the field – and rightly so. “It is thought the vast majority of phages remain undescribed by science,” says Edwards. “This incredible biological resource remains mainly untapped.” 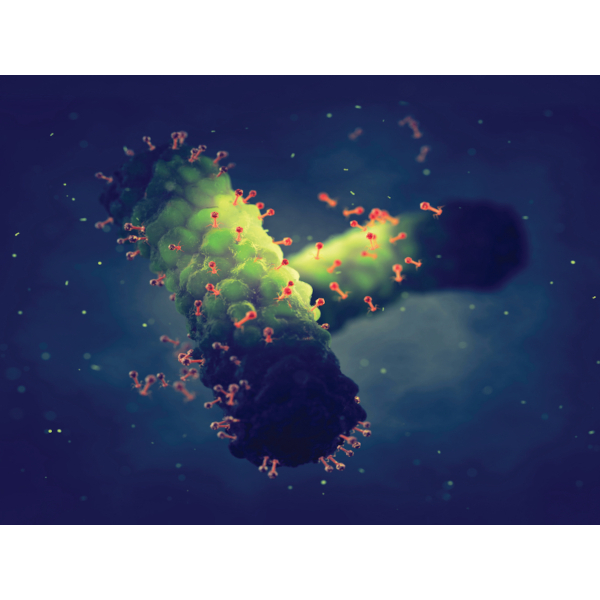 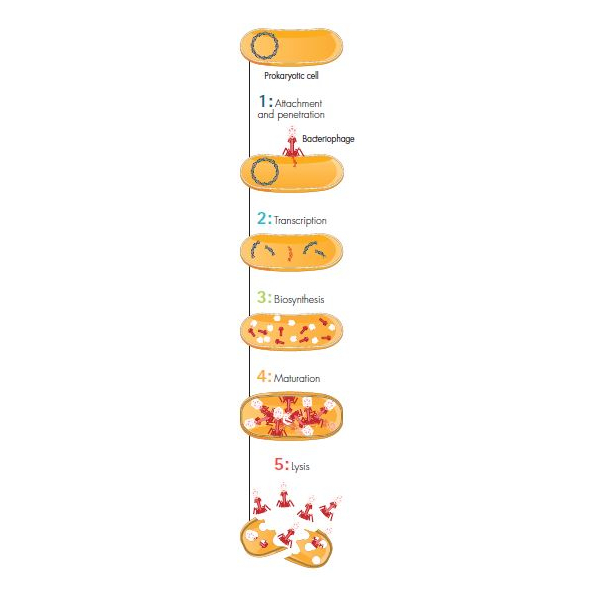 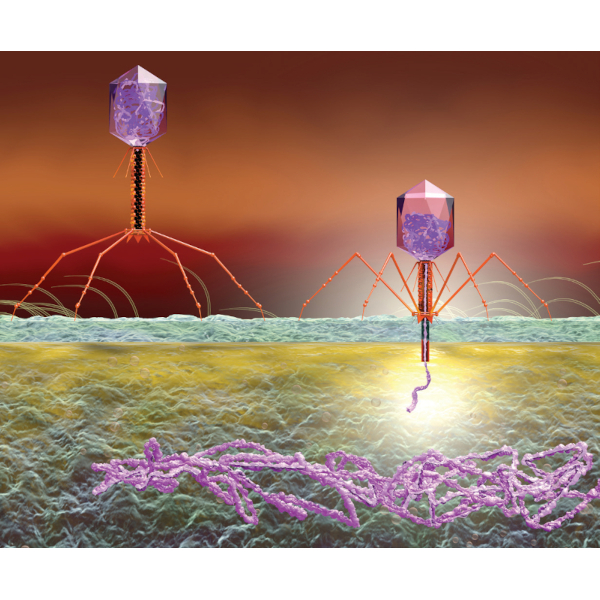 When a phage attacks a bacterium, it injects its DNA. The bacterium then makes more phages that are released when the bacterium burst.
Post to: