The big squeeze: the value of bariatric surgery

Bariatric surgery is well thought of in the industry as a procedure for weight-loss problems, but it has become less popular in recent years as hospitals and patients tighten their belts financially. Antonio Torres, president of the International Federation for the Surgery of Obesity and Metabolic Disorders, tells Nic Paton why it remains a vital option.

Bariatric surgery, usually in the form of a gastric bypass or lap band, is one of the most radical interventions available to patients desperate to lose weight. It is also considered by many clinicians to be one of the most effective methods of recovering from diabetes or improving cardiovascular risk levels. A study in the New England Journal of Medicine in 2009 even suggested a potential reduction in mortality of 23-40%, although there is continuing debate around long-term effects on patient mortality and morbidity.

What is clear, though, is that, since the first procedure was carried out in the 1950s, bariatric care has become a revenue stream for many healthcare systems.

The increasing problem of obesity - and the knock-on health and healthcare costs - plus the attraction of bariatric surgery from a lifestyle perspective when it comes to weight loss, have made it an increasingly attractive option, and the number of procedures being carried out in the US alone is rsing consistently.

However, the economic downturn has put a squeeze on the power of individuals to splash out on elective procedures for lifestyle reasons and, at the same time, pressure on hospital budgets has meant much greater interrogation of funding for the same procedures. As a result, since 2006 there has been a sharp decline in bariatric care growth rates.

"Bariatric surgery has a lot of benefits, not just around obesity, morbidity and metabolic systems; it can actually save healthcare systems' money," argues Antonio Torres, president of the the International Federation for the Surgery of Obesity and Metabolic Disorders.

For example, the impact of obesity on bone systems can be immense, an impact that may, in time, result in surgery.

"It is about making the patient aware of the fact that what they have is a disease, even if they know that their obesity is a problem," says Torres. "Often obesity is seen as a cosmetic issue rather than a disease, and if it is viewed as something cosmetic it may not be considered urgent or something that people want to spend money on.

"The main pro, of course, for the patient, is that they will be cured of a very important disease and therefore of all the co-morbities that this disease can bring It is important to make patients aware of the fact that it is a disease, and that there isn't the option of surgical treatment.

"The most important negative is the implication from a general point of view of having a surgical approach for so many patients on resources, training and so on. Our healthcare systems are not very well prepared for dealing with this epidemic.

"Surgery, of course, always needs to be the last option, not something that is rushed into. Obesity is a complex disease and surgery, as most physicians will be only too well aware, is not the only solution."

This is where bariatric care can come into the equation. It generally consists of pre and post-operative care and education for people who have had, or are about to undergo, bariatric surgery.

The exact procedures and processes will inevitably differ but, in general, pre-bariatric care will include an initial consultation to see if surgery is the best option for the patient and, if so, what type of bariatric surgery is most appropriate.

Post-bariatric surgery, by comparison, is normally more focused on post-operative medical care and recovery, as well as longer-term patient education on how to properly regulate diet and exercise.

For example, an important element of bariatric care is discovering the best vitamin supplements that a patient should take. Because the stomach will be much smaller after surgery, it is vitally important that a patient continues to consume all the vitamins and proteins they need.

"The most important challenge for surgeons is to be calming and well-trained," says Torres. "The bariatric surgical societies have a very important role in providing training programmes, sharing experience and best practice. There is also an important role for hospitals when it comes to mentoring and knowledge transfer.

"For a surgeon who wants to be a bariatric surgeon, one of the most important challenges is to always be aware that surgery is not the only solution; the solutions have to be driven by the multidisciplinary team."

Even with the dip seen since the global economic downturn, Torres believes bariatric surgery and care will continue to play a vital role in helping healthcare systems around the world deal with the obesity epidemic.

"In a way, I think of it as the same sort of challenge that was faced by healthcare systems in the 20th century from tuberculosis," he explains. "That put the hospitals of the day under huge pressure and dealing with it required a very clear, well-communicated strategy.

"Many hospitals became very full but, once the disease was under control, they were free to change their use. With this epidemic of obesity, we do not have enough material or personnel resources. Many doctors have little more information than the patients they are treating, and many are not very well informed about the treatments that are available.

Almost 80% of patients do not expect to see huge change as a result of bariatric care. But, in fact, it is amazing how much change can be effected, even in the first six weeks after a procedure.

"And more interventions can be carried out laparoscopically, meaning they are less invasive, less painful and have a quicker recovery time," Torres says. "Patients can be walking about just a day after surgery. So the expectations are much higher.

"I can envisage developments around a combination of laparoscopic and endoscopic approaches. This is a new idea from a technological point of view.

Perhaps the biggest challenge for anyone involved in bariatric surgery is maintaining access to surgery for increasingly obese populations all over the world. It is not just in the developed world where this is a problem, but in emerging economies too.

Obesity is an issue in India and Brazil, for example. There are also a lot of problems beginning to emerge around diabetes. "There is a huge research challenge out there in terms of helping scientists to understand and gain information on the pathology of this disease," Torres says. "It encompasses lifestyle and mental health issues, of course, as well as physical symptoms; it is very complex."

US obesity in figures

US bariatric surgery in numbers 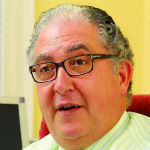 Antonio Torres, president of the the International Federation for the Surgery of Obesity and Metabolic Disorders.
Post to: