Life in your hands

Considerable effort has been put into boosting adherence to hand-hygiene practices among healthcare staff, but there’s a blind spot when it comes to patients. Isabel Ellis asks Lona Mody, geriatrician, epidemiologist and patient-safety researcher at the University of Michigan, about her research into patient colonisation by multi-drug resistant organisms.

Wash your hands before you touch a patient, and then wash them again after. Wash your hands even if you didn’t actually touch the patient, because to enter their room you probably had to touch their door, just like they do. Wash your hands after any risk of exposure to any bodily fluids. Before an aseptic procedure, wash and disinfect your hands. That’s the minimum.

Hand hygiene is drummed into healthcare workers with posters, peer pressure, text messages, sticks and carrots. It’s axiomatic that hospital staff, before anything else, should ‘do no harm’, and there are few clearer cases of harm than when a doctor or nurse’s lax hygiene results in a patient being infected with a potentially lethal multidrug-resistant organism (MDRO). Still, it’s laborious, and terrible for the skin – irritant contact dermatitis is 4.5 times more common in healthcare professionals than the general population – and sometimes people just forget to do it. According to one 2014 study in the Journal of Applied Psychology, by the end of a 12-hour shift, healthcare workers are only washing their hands on 34.8% of the occasions they should be. So, it’s not entirely surprising that nosocomial infections happen; but that’s far from the only reason for them.

Hospital staff can’t take ten paces without a reminder of how, why and when to wash their hands. Patients, not so much.

“Patients are not as engaged, at many levels, in improving hand hygiene in particular, but also in overall infection prevention,” says Lona Mody, the associate director of clinical and translational research at the University of Michigan Geriatrics Center, as well as the institution’s professor of internal medicine. “And clearly, we need to do more, as evidenced by the increasing rate of antibiotic resistance and infections globally.” Indeed, patients seem to be washing their hands less in hospitals than they do at home.

In another 2014 study of 207 patients in Infection Control and Hospital Epidemiology, the number who always washed their hands after using the bathroom decreased from 85% at home to 69.5% in hospital, while the number who never did so rocketed from 1% to more than one in 10. The trend was even more stark prior to meals, with only 41.4% of patients always washing their hands before they eat in hospital, versus 64.7% at home. Astonishingly, the 2.9% who never wash before eating domestically grew to encompass more than a fifth of the respondents in healthcare environments.

That’s not a one-off finding, either. A further study published in the same journal the following year found that, “Patients performed hand hygiene during 29.7% of bathroom visits, 39.1% of mealtimes, 3.3% of kitchen visits, 2.9% of room entries and 6.7% of room exits.”

Patient hand hygiene was an uncommon research topic when those papers were published and it still is now. “When I talk to other investigators, they’re like, ‘Why didn’t we think about this before?’” says Mody, who has spent as much time researching it as anyone. “I feel that sometimes, as researchers, we get into the depths of this topic quite quickly, and we don’t step back as much as we should, in terms of our own work and our own research.”

That’s a long-standing issue. Some medical historians even argue that the 19th century doctor Ignaz Semmelweis, the brilliant, ridiculed and ultimately ignored pioneer of antisepsis, could have convinced more of his contemporaries of the importance of washing their hands if he gave some thought to communicating his results.

This is not the Vienna of 1847, where bloodstained doctors strode straight from autopsy to childbirth, but the patient hygiene blind spot has become more of a problem due to recent changes in our own paradigm of patient care. As Mody explains, “Over the past five to six years, there has been a big push towards keeping patients mobile while they’re in hospital so they don’t lose their functions.” Recovering patients are encouraged to walk to their therapy sessions, and today’s diagnostic tools and interventional procedures are mostly performed or operated in specialised rooms. “The older model of doctors coming to patients is no longer…” Mody pauses, weighing her words before bringing them down, “valid”.

There are two important considerations here, stresses Mody, who is fond of breaking issues down and thinking them through with lists, a trait she shares with the authors of most hand-hygiene guidance. First, there is a growing danger that patients can serve as a vector to transmit whatever bacteria they have on their hands, directly or indirectly, to other patients. “And second,” thanks, in a roundabout sort of way, to people like Semmelweis, “we have a relatively simple intervention to do something about it.”

Mody’s most recent paper, which was published in Clinical Infectious Diseases in April, focuses on the first of these considerations. Sampling the hands, nares and rooms of close to 400 patients from two hospitals in southeast Michigan, her study found that 6.2% of them acquired MDROs on their hands, and 21.8% in their rooms during their stay, at a rate of 24.6/1000 and 58.6/1000 patient-days, respectively. By chance, the study also included six patients infected with MRSA. Tellingly, all of them had the so-called superbug in at least one of their samples (four on their dominant hands, two on their nares, one in both locations and four in their rooms). On the other side, in 94.1% of the occasions when MRSA wasn’t found on patient hands, it wasn’t in their rooms either.

That said, numerous studies show that, on average, the hands of about 5% of healthcare workers are contaminated with an MDRO, so it wasn’t hugely shocking to find that 6.2% of patient’s hands were too. As Mody herself puts it, “We were not too surprised at what they were picking up, but we were surprised about what they came in with.” Indeed, the study found that 14% of patients were colonised with an MDRO at enrolment, and 29% of rooms were contaminated within 24 hours of admission.

Mody believes it’s possible that patients are colonised by MDROs within the first few hours they spend in hospital. “I think we are not paying as much attention to the emergency room, and its role in infection transmission and outbreak, as it takes care of many patients in a very short period of time,” she says. “It could be that it’s just providing a normal risk compared with the inpatient setting, or a heightened risk – certainly there’s going to be some infection transmission, but we just need a word from that space before we can be confident that it’s implicated in these results.”

That’s not Mody’s first concern, however. Alongside their growing emphasis on early patient mobility, emerging healthcare systems are prioritising same-day surgeries and community care over prolonged hospital stays. “That’s the other factor that we have to keep in mind, which we did not study and should be an extension to follow on from this one,” she continues. “What happens in the community and through homecare? What are the levels of hand contamination in a recently discharged population? And how are patients doing with their hand hygiene?”

Healthcare professionals aren’t the spotless paragons of cleanliness we might hope, but rates of hospital-acquired infections have been drastically reduced over the past 20–30 years because, first, their hands, and second, their minds, have been so well studied. Everything researchers have learned about healthcare workers has been used to help minimise the threat that they might serve as vectors for transmitting infections to patients. It might only be handwashing, but, at present, we’re not nearly so sophisticated when it comes to protecting patients from themselves.

41.4%
of patients wash their hands before they eat in hospital.
Infection Control and Hospital Epidemiology

“We need to ask ourselves how good the public health campaign for preventing infections at home is, and how engaged the public is in general about hygiene at home, especially when they’re ill,” stresses Mody. “That changes everything, right? When they’re ill at home, their job and their routine, and everything, changes. Their life changes, and with the change in their life, how good are they at maintaining their hygiene? It’s something that requires more thought and effort.”

At present, Mody has not established that there is any patient-to-patient transmission of MDROs. “What we are saying is that patient hands are contaminated and there’s a potential for transmission,” she says. As far as the next stage of investigation is concerned, her and her fellow authors have received funding for a three-to-four year project to track potential transmission with a new patient population, as they travel to and from their daily hospital appointments.

In the meantime, she has a list of interventions that can make a meaningful difference to patient hand hygiene and infection risk. The first item is simple, to say the least. “There’s absolutely no harm in telling our patients that they should be washing their hands in the hospital,” she says. “They should know it’s even more important because they’re surrounded by other sick individuals who may pick up a bug or might transmit their own bugs.”

The second recommendation is a bit more experimental. One of the things about staying in hospital is the time it gives people to catch up on reading – specifically, in this case, about infection control. With experts on hand, “We can certainly take the opportunity to do a little bit more in promoting hygiene education to the patient and their loved ones,” says Mody. “There’s nothing stopping us from doing that.”

Finally, to set up more targeted approaches in the future, infection-control providers and practitioners need to leverage the available evidence to advocate for more resources to be dedicated to patient-hygiene programmes. Mody points to the work of Dr Vincent Cheng at Queen Mary Hospital, Hong Kong, as evidence of the effective interventions that it might be possible to implement if the (admittedly very limited) infection-control budget grew to include patientspecific provisions.

Indeed, through measures such as hygiene ambassadors, patient empowerment (where patients are encouraged to remind doctors and nurses to wash their hands) and directly observed hand hygiene, Cheng and his fellow researchers have demonstrated that it’s possible to greatly improve patient and staff handwashing practices while minimising environmental contamination and the risk of MDRO outbreaks.

Such research has Mody optimistic. “We have, like, 50,000 papers on healthcare worker hand hygiene and very few on patient hand hygiene,” she says. “But I hope that our studies inspire other investigators to look at these kinds of questions in a variety of settings.” There’s a lot more research to be done, but healthcare providers can start making a difference now.

1. When entering or leaving the patient room.
2. After having used the toilet or bedpan.
3. Before eating, drinking or taking medication.
4. Before and after contact with own wounds, mucous membranes or venous accesses.
5. After contact with high-touch surfaces in the hospital, like door handles or handrails.
Source: Bode Science Center 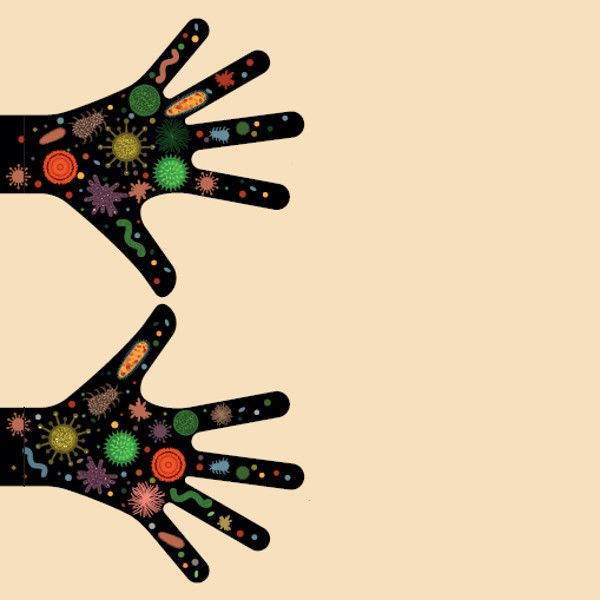 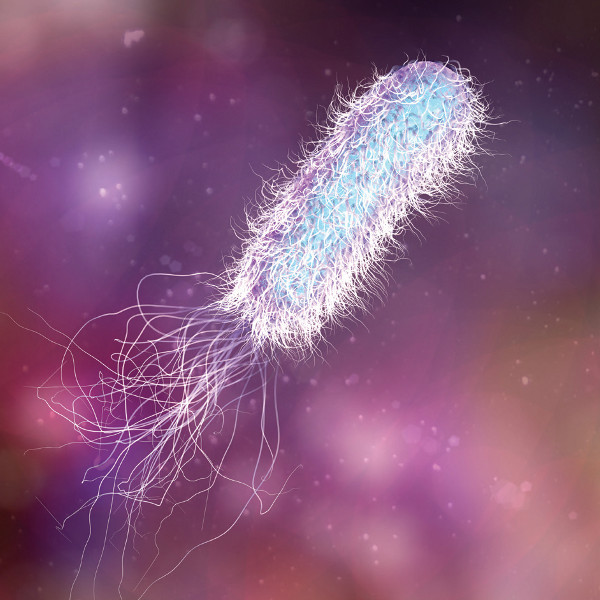 Without good hand-hygiene doctors and patients alike risk the likelihood of transferring infectious bacteria and diseases, such as MRSA.
Post to: