It's all on the web

Inspired by the way spiders exude ‘glue’ to catch their prey in the rain, a double-sided tape designed to stick body tissue together after surgery was developed by scientists at Massachusetts Institute of Technology. Lyn Erb speaks to study author Hyunwoo Yuk about the implications for wound care.

Surgical sutures and staples have been enduring tools of medicine for the past 100 years. However that may soon change with an innovativ approach to sealing wounds inspired by – of all things – spiders.

“Surgical sutures or staples have a long history of use – the suture was one of the first medical devices invented, with surgical staplers created over 100 years ago,” says Yuk. “However, suturing and stapling are essentially damaging to tissues. They are the equivalent of how we make our clothes – they puncture through tissues and use tension to tighten and hold tissue together. That means they have several clinical complications, including scar tissue formation, wound dehiscence and leakages.”

The MIT team asked more than 30 surgeons from across a range of disciplines what they wanted from adhesives – and the outcome was clear. “The functionality surgeons wanted was similar to that of Scotch tape or duct tape,” says Yuk. “They wanted rapid adhesion formation, robust adhesion performance, easy and flexible use, non-liquid and convenience in storage. So we needed to overcome the problem of such tape not working on wet biological tissues or meeting clinical demands in operating rooms.”

Along came a spider

The inspiration for MIT’s solution has come from the natural world, with the robust nature of spiders providing the key.

“We spent quite a long time thinking about solutions to address the limitations of existing tissue adhesives,” says Yuk. “As with many research projects, the idea came unexpectedly one rainy day. I saw a spider’s web with raindrops hanging from it and asked, ‘can they capture insects on a rainy day?’ The answer was obviously ‘yes’, as spiders survive in wet conditions like rainforests.”

The next question was: how does a spider’s prey stick to the web even in wet and humid environments?

In fact, the glue in spider’s webs contains hydroscopic biopolymers that absorb water molecules as they come into contact with the web surface, drying the contact point to allow its sticky molecules to interact and form adhesion.

“It was a eureka moment for us as this elegant mechanism in spider’s web glue seemed the perfect solution to our problem,” says Yuk.

The team set to work designing and developing bioadhesive materials to mimic the spider’s web’s mechanism for biological tissues, and reproducing it in tape format.

“Most biological tissues are wet and contain a high concentration of water – and this water layer has been a major problem in terms of developing adhesive and sealants,” says Yuk. “In theory, liquid tissue adhesives should diffuse and solidify; however, the presence of an interfacial water layer significantly interferes with this process and you end up with slow diffusion, delayed solidification, and weak and unstable adhesion. As a result, existing medical tapes used on the skin simply do not stick to wet tissue.”

MIT’s tape mimics the action of a spider’s web, simply removing the wet layer from the surface of the tissue. The bioadhesive tape absorbs the water, which activates chemical and physical cross-linking processes to form rapid and robust adhesion.

The polymer-based tape offers a number of benefits over suture and staple-based closures. Firstly, it is fast, easy to use and more effectively seals wet tissues. This has both clinical and cost benefits for surgeons and health systems.

Secondly, the tape is based on areal sealing – rather than point-wise closure – which provides a more robust closure as it avoids unwanted stress concentrations around punctured points. It provides a puncture-free closure without causing additional damage to tissue.

“While we ultimately hope to replace sutures and staples altogether, our more realistic short-term aim is to provide our bioadhesive tape as adjunct solution on top of sutured or stapled closures to minimise debilitating clinical complications such as anastomotic failure and leakages,” Yuk says.

“The rapid and robust sealing capability of our tape may help to reduce operation time for surgeries. Also, as the failure of surgical closures and associated clinical complications result in a huge economic and clinical burden in terms of readmissions, increased mortality and longer hospitalisation periods, we hope our tape can help ease these kinds of pressures on medical systems.”

Applications where sutures and staples have a high rate of failure are of particular interest. For example, in gastrointestinal anastomosis, sutured or stapled closure failure and leakage rates can be as high as 30%. This is associated with clinical complications, including a threefold increase in mortality.

“While our bioadhesive tape may benefit a broad spectrum of surgeries and biomedical applications, we are trying to explore high-risk applications first – areas where our tape may offer the biggest benefit over conventional approaches,” says Yuk.

In addition to standard surgical application, the tape may also be effective when used on implanted devices that are currently fixed to target tissues by sutures.

“Generating tissue damage by suture in order to integrate devices on target tissue is not favourable – especially for highly sensitive organs such as the heart, where sutures can generate arrhythmia,” says Yuk. “We hope that our bioadhesive tape can provide a promising solution for various devices and implants for their – literally – seamless integration to our body.”

The robust nature of the tape – and its potential use across so many applications – is in no small part due to its use of polymers, an area of specialisation for the MIT group for some years now. The tape uses mechanically robust hydrogels, a polymer network with a high water content that has been central to Yuk’s previous work.

“In adhesive applications, it is essential to ensure the mechanical robustness of adhesive material while matching the mechanical properties of biological tissues in terms of being soft and stretchy. This provides reliable yet biocompatible functionalities,” he says.

“The human body is basically made out of polymers – especially hydrogels, as most of our tissues contain high water content. Therefore, any biomedical devices or implants that closely interact with biological tissue are increasingly based on polymers of various kinds to match mechanical and chemical properties of biological tissues while providing the relevant functionalities.”

Yuk says polymers were an ideal material for the tape and were increasingly in demand for a range of other medical devices and applications that require eventual biodegradation and replacement by native tissues. Polymers – unlike metals – biodegrade organically over time and remove the need for additional surgery.

The make-up of the tape and its polymer composition can be tailored to different applications depending on the biodegradation lifetime required. For example, gelatin-based tape that can degrade within few weeks could be used for relatively fast healing tissues. On the other hand, relatively slow healing tissues or tissues sustaining mechanical load or providing a barrier function – such as in the gut or in vessels – may require a chitosan-based tape that can degrade more slowly over several months.

“We see polymers playing an increasingly important role in the development of new products across the medical field,” says Yuk.

The next stage of research for MIT’s ‘sticky spider tape’ involves pre-clinical studies in collaboration with Harvard Medical School and the Mayo Clinic, with 2021 targeted for clinical trials.

“It may take several years to initiate clinical trials and we may need to seek formal investment funding to move forward towards commercialisation, but we are confident our adhesive tape can meet regulatory hurdles and eventually be brought to market,” Yuk concludes.

The progression of scaffolds and wound dressings

Traditional, passive wound dressings include gauze and tulle. Although these provide coverage, they can adhere to the wound bed and cause disruption and pain upon removal. In contrast, modern wound dressings not only cover the wound but interact with it to actively promote healing. They use more advanced materials in their formulations and can be classified as either interactive or bioactive. They include semi-permeable films and foams (often constructed of polyurethane), hydrogels, hydrocolloids, alginates, collagens and hydrofibers. Bioactive dressings are comprised of biomaterials with high biocompatibility, biodegradability and a non-toxic nature; common constituents include hyaluronic acid (HA), chitosan (CS) and elastin, among others.

For larger, deeper and chronic wounds, a matrix-like scaffold may be required to guide cell proliferation and provide mechanical support for tissue regeneration. A scaffold should have high porosity, a large surface area to volume ratio, an interconnected geometry, structural strength and be specific to the shape of the wound. Ideally it should be biocompatible and biodegradable, with a degradation profile that is reflective of the wound healing duration. Scaffolds can take on various forms including fi brous networks, sponges, foams and hydrogels, among others. Various naturally derived polymeric materials have been used as tissue scaffolds including collagen, chitosan, fibrin, elastin, gelatine, hyaluronic acid and silk. However, synthetic polymers have also been used including polycaprolactone (PCL), poly(lactic acid) (PLA), poly(glycolic acid) (PGA) and their copolymers. Moreover, nanofibers produced by electrospinning hold much promise in terms of tissue scaffolds as their structure is reminiscent of that of extracellular matrix. They allow for nutrient exchange, for the removal of waste products and are able to provide physical protection against microorganisms due to their small pore size.

In the past few decades, the incorporation of conducting polymers into scaffolds and dressings has been investigated. The increased electrical conductivity that can be provided by their inclusion can facilitate the application of therapies such as electrical stimulation to the wound area as well as enabling the controlled release of pharmaceutical and biological agents. Common CPs include polypyrrole (PPy), polyaniline (PANI), polythiophene (PTh) and their derivates, including poly(3,4- ethylenedioxythiophene) (PEDOT). 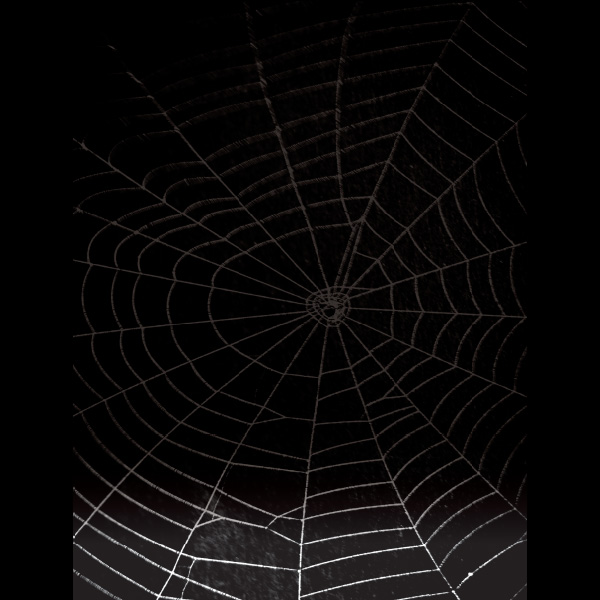 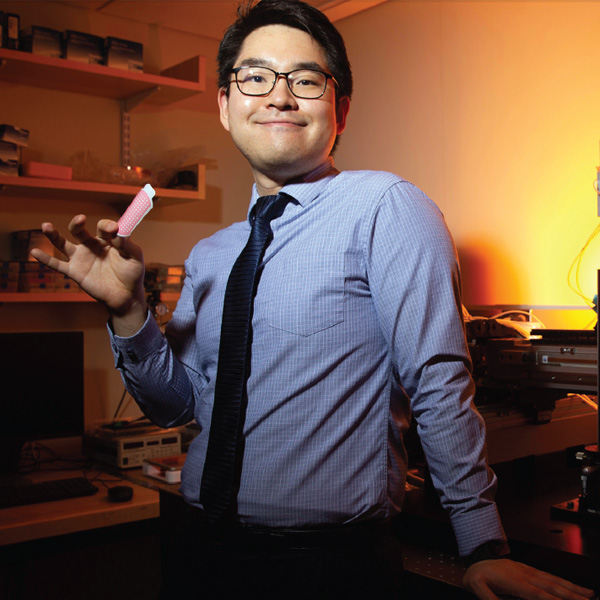 Spider-Man: Study author Hyunwoo Yuk with a prototype of the double-sided adhesive tape created by the MIT team.
Post to: