Thanks to medical advances, we are living longer than any time in history. But an ageing population brings added risks, one being heart failure. According to the World Heart Federation, there are 26 million people suffering from heart failure globally, and that number is increasing. Kim Thomas speaks to cardiovascular experts Stefan Anker and Abbas Bitar about the technology and therapeutic developments they expect to improve critical care for patients with heart conditions.

Just under a million people in the UK are living with heart failure, with 60,000 new cases identified every year. It is predominantly a disease of old age, with diagnosis averaging at 77 years old. As the population ages, the number of people affected increases. For many years, clinicians relied on a suite of treatments that proved moderately effective. The past five years, however, have seen some major developments in the treatment of the condition – and there is real optimism that we will see more in the near future. So, what is the best treatment for heart failure – and what treatments are around the corner?

Heart failure means that the heart is unable to pump blood around the body effectively. There are two types: one where the heart muscle is weak, known as heart failure with reduced ejection fraction (HFrEF), and the other where the heart muscle is stiff, known as heart failure with preserved ejection fraction (HFpEF). According to Abbas Bitar, clinical assistant professor in the division of cardiovascular medicine at the University of Michigan, historically HFrEF was believed to be the more common type. But we now know the incidence of each to be similar.

Beta-blockers, which lower blood pressure and slow the heart rate, diuretics to tackle water retention and angiotensin converting enzyme (ACE) inhibitors – which block the production of angiotensin II in the kidneys – have been used for many years to treat HFrEF. Mineralocorticoid receptor antagonists (MRAs) are the go-to drug for treating advanced heart failure.

In the past few years, however, two drugs have demonstrated particular potential in the treatment of HFrEF, Bitar explains. Marketed under the brand name Entresto, angiotensin receptor neprilysin inhibitors (ARNi) have been shown in trials to be more effective at prolonging life than ACE inhibitors, and Bitar believes their use will become much more commonplace. Entresto combines two drugs traditionally used to reduce blood pressure: sacubitril and valsartan. Sacubitril works by blocking the breakdown of natriuretic peptides produced in the body, while valsartan blocks the action of angiotensin II – the hormone that causes left ventricular hypertrophy and increases mortality risk in heart failure patients.

The second promising type of drugs are sodium glucose cotransporter 2 (SGLT2) inhibitors, which have traditionally been used to treat diabetes. Two major trials, DAPA-HF (assessing dapagliflozin) in 2019 and EMPEROR-Reduced (assessing empagliflozin) in 2020 showed that SGLT2 inhibition reduced the combined risk of cardiovascular death or hospitalisation for heart failure in patients with HFrEF.

Treatment for HFpEF is on the horizon

HFpEF has proved harder to treat than HFrEF. “Management focuses mainly on making sure that patients don’t build up any fluid by using diuretics, and controlling their blood pressure,” says Bitar. But this could change. Stefan Anker, professor of cardiology at Charite University in Berlin, was involved in another trial, the EMPEROR-Preserved trial, which looked at using empagliflozin to treat HFpEF patients. The results, published in August 2020, “showed for the first time a successful therapy for HFpEF patients”, says Anker. The ongoing DELIVER trial is currently looking at the use of dapagliflozin to treat HFpEF patients.

Anker highlights two vital changes to the European Society of Cardiology guidelines on treating heart failure, published in 2021. The guidelines recommend using four classes of medicine for early treatment of HFrEF: ARN inhibitors, beta-blockers, MRAs and SGLT2 inhibitors. In the past, the advice has been to prescribe patients a maximum dose of one type of heart failure drug, and then move on to the next.

“The guidelines now emphasise an approach where you give the patients, as quickly as possible, at least four classes of drugs that are all shown to be survival-prolonging,” says Anker. Within four to eight weeks, the patient should be taking all four drugs, but not necessarily at the maximum dose. This is a highly significant change that buys the patient time, he says: “You can only benefit from a drug that you take. If you don’t take the drug, it can’t exert benefit, so shortening that period of time is really a big step forward.”

The second new recommendation requires physicians to personalise the therapy, by factoring in differences in aetiology and comorbidities. Anker says: “When you want to consider therapy beyond the four foundational therapies, you should take the phenotype of the patient into account and then individualise therapy for the valve problems, for the sleep apnoea, for the iron deficiency, for the high heart rate.”

Looking further ahead, says Bitar, two drugs have undergone successful phase III trials. The first is omecamtiv mecarbil, which “makes the heart muscle squeeze a bit more efficiently without increasing how much energy the heart needs”. The 2020 study reduced the amount of time until patients either died from heart-related causes or needed treatment for heart failure by 8%. The second drug is the soluble guanylate cyclase stimulator, which a 2020 trial concluded led to both lower risk of death and lower risk of being admitted to hospital. “Those would be the two most promising candidates for the near future,” he says.

Anker also draws attention to the IRONMAN clinical trial currently being carried out by the University of Glasgow, which is investigating whether intravenous iron can improve life expectancy in patients with heart failure. Results of the five-year trial, which began in 2016, are expected shortly.

For patients with advanced heart failure, clinicians have long used implantable devices. The main one is a heart pump, known as a left ventricular assist device (LVAD). Fitting the patient with an LVAD is a highly invasive procedure involving opening up the chest and inserting the pump, which, as Bitar explains, “will suck the blood from the left lower chamber of the heart and then pump it into the aorta, so it takes over the function of the left side of the heart.” Because the pump needs a source of power, a cord goes through the individual's skin and is linked to a controller (a small computer) connected to batteries.

The technology has improved a great deal in the past two decades, Bitar says, pumps are more durable and reliable. The newest model, Abbott’s HeartMate 3, has reduced the risk of thrombosis inside the pump to “close to zero”, he explains, while the risk of stroke “has dropped significantly compared to previous pump generations”. Patients who have a pump fitted usually also take aspirin to reduce thrombosis risk, but there is concern that this may increase bleeding risk. A multinational trial, known as the ARIES study, which is due to complete in 2023, is investigating whether the aspirin is necessary with the HeartMate 3.

Eventually, Bitar believes, the pump will be “totally internal”, and the lack of a cord coming through the skin will mitigate any risk of infection. “That’s a few years down the road,” he adds.

Remote monitoring is another recent innovation. The CardioMEMS HF sensor, which has been on the market for about seven years, is used with patients recently hospitalised with later-stage HFrEF and HFpEF. Implanted into the pulmonary artery, it monitors changes in pulmonary artery pressure and transmits the reading wirelessly into the cloud. “The physician can access that from their office, see what’s going on and make some adjustments to the medication,” says Bitar.

For example, currently patients who have a leaky mitral valve may have surgery to insert a mitral clip. Researchers are now investigating whether they can “replace the mitral valve altogether without having to open up the chest”, says Bitar. This involves making an incision just below the left breast, puncturing the heart muscle and then using a catheter to deploy the valve. We will know the results in a couple of years. Similarly, he says, in cases where the tricuspid valve is treated, it is traditionally replaced with an artificial valve. There are now studies under way to assess whether a clip can be inserted via a catheter into the tricuspid valve.

The Occlutech atrial flow regulator, another minimally invasive device, is being investigated for use with both HFpEF and HFrEF patients. Implanted into the interatrial septum of the heart, the device has a predetermined diameter allowing for controlled blood flow from the left to the right atrium, enabling the left atrium to decompress and lower left atrial pressure.

Both Anker and Bitar point out that for many years treatment for heart failure remained fairly static, but that in a short space of time there have been major steps forward. Bitar is optimistic about the future, pointing out that in the past five or six years, we have seen the advent of both ARN inhibitors and SGL2 inhibitors, and that we are likely to see the omecamtiv mecarbil and solval granulate cyclase stimulator being adopted in the near future. “In terms of advanced heart failure, I think five or ten years from now, we’re going to have a totally implantable LVAD,” he says. When it comes to valve procedures, he adds: “Most of them will be done with minimally invasive procedures without having to open up a chest like we’ve done for decades. I think that’s where we’re heading.” 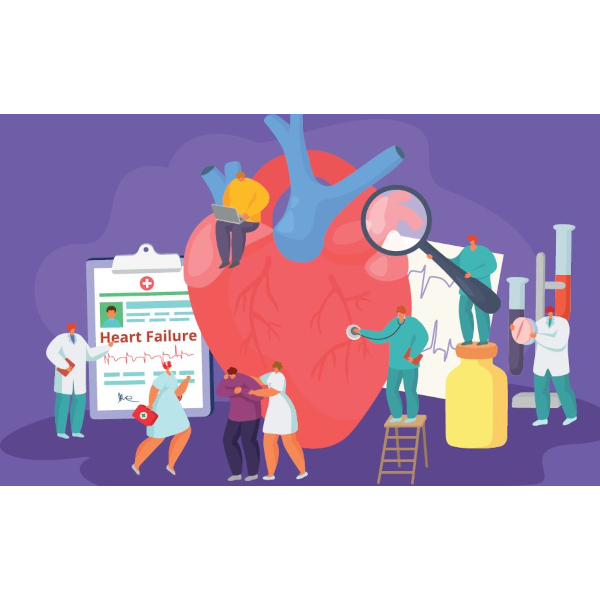 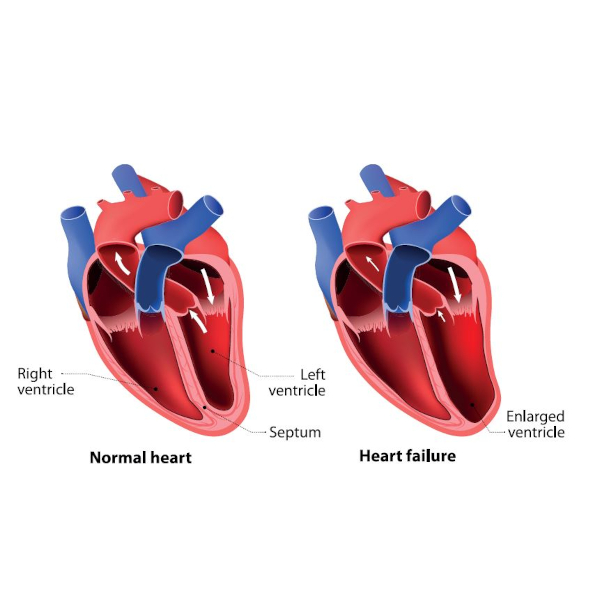 A diagram showcasing left ventricular hypertrophy, an event that increases the chances of fatality from heart failure. 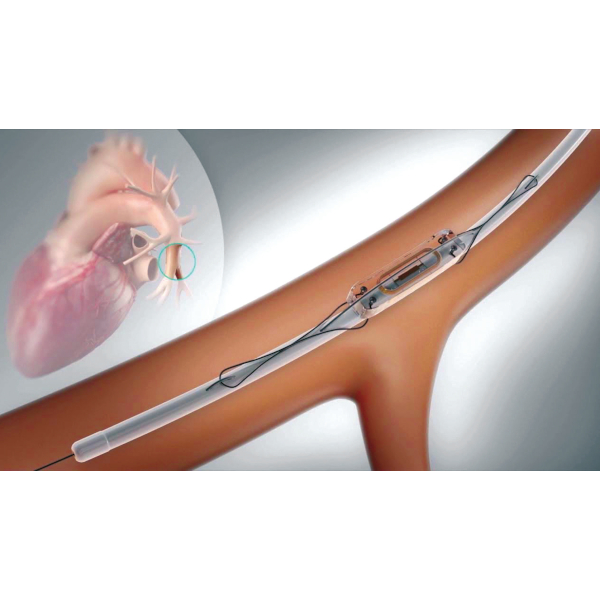