A comprehensive portfolio of Borrelia antibody test systems from EUROIMMUN enables qualified two-step Lyme disease diagnostics according to the latest recommendations. Screening and confirmatory tests based on optimised combinations of native and recombinant antigens are complemented by flexible automation options for all tests and throughput requirements.

Lyme disease is caused by human pathogenic Borrelia that are transmitted by ticks of the genus Ixodes. The disease can manifest with dermatological, neurological or internal symptoms. Early diagnosis and prompt treatment is important to avoid long-term sequelae like neuroborreliosis and arthritis. Diagnosis is based on patient anamnesis, clinical findings and serological detection of antibodies against Borrelia antigens. A two-step strategy for serological diagnostics is advised by the German Society for Hygiene and Microbiology, the Robert Koch Institute and the CDC, among other health organisations.

In the first diagnostic step, patient sera are characterised using a sensitive screening test such as enzyme-linked immunosorbent assay (ELISA), chemiluminescence immunoassay (ChLIA) or indirect immunofluorescence test (IIFT). Both IgM and IgG are measured. EUROIMMUN offers a comprehensive range of screening tests with different techniques to meet all laboratory requirements. ELISAs based on native whole extracts from different Borrelia species provide especially high sensitivity due to the broad antigen spectrum encompassing all diagnostically relevant proteins, including the important early antigen OspC. The further major antigen VlsE, which is not produced by cultured bacteria, is added in recombinant form to the IgG substrate to bolster the antibody detection. ELISAs and ChLIAs based on a mix of selected, specific recombinant antigens exhibit reduced cross-reactivity compared with whole-antigen tests. The recombinant antigens include a specially designed dimeric form of OspC, which provides higher specificity than conventional monomeric OspC at the same sensitivity as native antigen. The IIFT provides a combination of bacterial smears and dots of OspC and VlsE for parallel antibody screening and characterisation.

In the second step of the strategy, positive and borderline sera are confirmed using immunoblot, which enables characterisation of the antibodies and differentiation between specific and unspecific reactions. IgG and IgM are analysed in parallel. EUROIMMUN immunoblots offer exclusive combinations of early- and late-phase markers, including VlsE and OspC from different Borrelia species, p39 (Bmp), p83, immunogenic lipids and the immunoreactive designer antigens p58, p21, p20, p19, p18 for increased specificity. Line blots are easy to evaluate due to the antigens being located at fixed positions. Formats include EUROLINE test strips and the soon to be available EUROMicroblot, comprising miniature blot strips in 96-well microplates for higher throughput analyses. A further immunoblot, the EUROLINE-WB, contains a whole antigen extract supplemented with a line of recombinant VlsE and is especially useful for identifying atypical reactions.

In suspected cases of neuroborreliosis, intrathecal antibody synthesis can be investigated using ELISAs and immunoblots designed for use with cerebrospinal fluid (CSF) samples. In addition, measurement of CXCL13 in CSF by ELISA helps to identify acute neuroborreliosis early. CXCL13 also serves as a marker for therapy monitoring, whereby its concentration in the CSF sinks with successful antibiotic treatment.

All EUROIMMUN Borrelia tests can be fully automated, increasing the efficiency and standardisation of Lyme disease diagnostics. Various ELISA, ChLIA, IIFT and immunoblot processors are available for different throughput requirements. The EUROMicroblot microplates can be conveniently processed on ELISA instruments like the EUROLabWorkstation ELISA or the EUROIMMUN Analyzer I or I-2P. EUROMicroblot images are subsequently acquired using the new tabletop Microwell Imager and the results are evaluated using established EUROLineScan software. 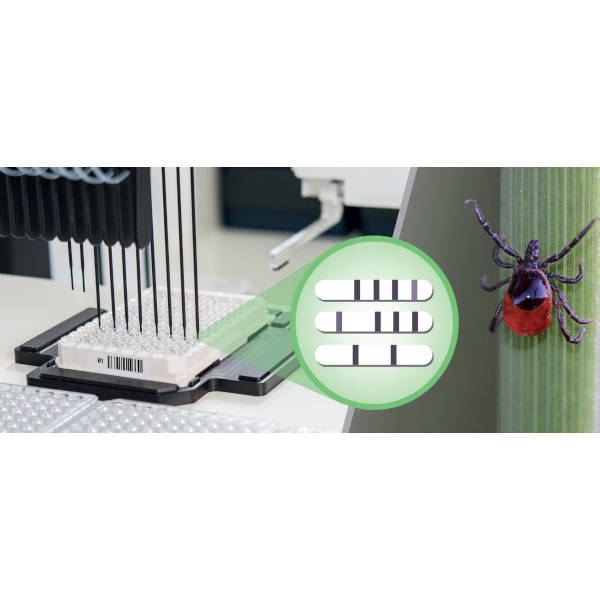