Robots emitting UV light are now being used to disinfect hospital rooms, sterilising drug-resistant bacteria that chemicals and humans may have missed. Clyde Brawner and Darin Smith of Norman Regional Health System in Oklahoma talk to Eleanor Wilson about how this impacts healthcare-associated infection rates and environmental operations.

Anyone who has ever encountered a swarm of mosquitoes knows that just one preventative measure is never enough: it takes a whole arsenal of tricks to escape the constant itching and the shudder-inducing whine. The bugs battled in hospitals may be a lot smaller, but an effective disinfection strategy must likewise defend against infection on multiple fronts – and additions to the arsenal are always welcome. Today, shortwave ultraviolet germicidal radiation (UV-C) is gaining ground as the newest weapon against antibiotic-resistant bacteria.

The Association for Professionals in Infection Control and Epidemiology calculates that the cost of hospital-acquired Clostridium difficile (C. diff) infection alone in the US averages $4,096 per infected patient. With one in 25 American hospital patients affected by healthcare-associated infections (HAIs), this adds up to a lot of unpleasantness for patients and stakeholders; nationwide, the cost reaches the billions. The Centers for Disease Control and Prevention’s (CDC’s) March 2016 Vital Signs report recommended that healthcare workers use a multipronged approach to targeting HAI rates, including following infection-prevention protocol when catheterising patients and ensuring antibiotics are used responsibly.

While these recommendations are important in stopping the spread of infection, they can’t prevent bacteria from breeding in the building itself. Housekeeping and environmental staff are under pressure to turn rooms over quickly, and high-touch surfaces can be easily missed. In patient rooms, surfaces like door handles, bedside tables, bed rails and remote controls are fertile breeding grounds for drug-resistant bacteria – up to 50% of surfaces may still be contaminated even after the terminal clean. This means that a patient in a room previously occupied by an infected patient has a 40% higher chance of contracting the same infection. As antibiotics and chemical decontamination begin to lose their effectiveness, it’s time to bring in the bug-zappers.

Exposure to strong UV-C light fuses the DNA of bacteria, rendering it sterile and unable to replicate. It has been used as a water-treatment system throughout Europe for several decades and is also widely used to disinfect laboratory equipment. The process is just as effective on drug-resistant bacteria but, for most of its history, it has not been practical to use UV-C for no-touch disinfection of an entire hospital room.

This is partly because of the progress of LED technology, since bacteria generally needs to be exposed to UV several times in rapid succession for maximum efficiency. Until recently, this would have required a human operator in the room, but exposing a human directly to UV-C light results in sunburn at best or skin cancer and eye damage at worst – the same as exposure to any form of strong UV light. In the past few years, robotics and LEDs have finally advanced to the point where a UV-emitting device can be placed in a room after terminal cleaning, disinfect it and then shut off on its own.

In January, The Lancet published the results of a CDC-funded study of nine US hospitals, targeting C. diff, multidrug-resistant Acinetobacter, methicillin-resistant Staphylococcus aureus (MRSA) and vancomycin-resistant enterococci (VRE), which found that “the incidence of target organisms among exposed patients was significantly lower after adding UV to standard cleaning strategies.”

Norman Regional Health System (NRHS), 30km south of Oklahoma City, took the plunge in August 2016 with the purchase of four LightStrike Germ-Zapping Robots from manufacturer Xenex. The 387-bed multicampus system serves regional communities throughout south-central Oklahoma. The hospital’s emphasis is on cardiovascular services, and it recently earned its Norman Regional HealthPlex campus a Women’s Choice Award as one of the best American hospitals for heart care.

The effects are already visible, according to the facility’s vice-president of quality and patient safety, Darin Smith: “In November 2016, we had our first month in probably three to five years where we had zero infections related to C. diff in the hospital.”

NRHS director of environmental services and patient transportation Clyde Brawner, Sr agrees, cautiously: “We have seen reductions in our HAIs, along with other disinfection strategies. We are hoping for 100% reduction but, realistically, we expect a 75% reduction.”

The major target areas at NRHS are the intensive care, step-down, cardiology and ortho-spine units over two of its campuses, in which 80% of discharges have their rooms ‘zapped’. During downtime, catheter labs, operating rooms and endoscopy rooms are also disinfected. The rooms of C. diff patients all merit a robot visit on discharge, regardless of unit.

“In developing a disinfection strategy, one should set short-term, measurable goals,” Brawner explains. “We’re not trying to disinfect all 50 or 60 discharges a day; that’s not practical at the onset.”

Launched in 2010, the Germ-Zapping Robots are now in use in more than 300 healthcare facilities around the US. Other hospitals using UV disinfection combined with a terminal clean have reported similarly dramatic results: a study at the UK’s Royal Manchester Children’s Hospital, published in 2016 by the American Journal of Infection Control, found that “on surfaces with high and low levels of contamination, the triple emitter whole-room UV-C disinfection system reduced the levels of bacteria to below detectable levels.”

UV disinfection extends the cleaning time of a room by up to ten minutes, so NRHS stakeholders made their choice based on user-friendliness and turnaround time to ensure that the housekeeping workload remained manageable. The goal was to avoid the logistical and staffing problems created when only certain staff members can use a new piece of equipment by ensuring that any of the hospital’s environmental staff could operate the robots at any time. The LightStrike robots require no specialised training and feature a short cycle time, able to zap between 30 and 60 rooms a day. They can also be left alone to run their pre-programmed cycles while cleaners get on with other duties.

“We weren’t sure what to expect as far as our ability to absorb that with existing staff but, so far, we have not had to add additional staff to operate the robots,” says Smith. “This is not a timesaver for anybody, but we feel like it’s a worthwhile investment.”

Brawner, in turn, was careful to emphasise to his staff that UV disinfection was a supplementary measure. His 34 years in environmental services at NRHS have taught him that there is no room for slacking where hygiene education is concerned, and he’s conscious that misconceptions can easily develop around new technology.

“There’s a perception that they do some part of the cleaning. When we introduced them to the housekeepers, the very first things we told them were: one, it’s not a replacement; and two, it does not clean for you,” he says.

Staff were encouraged to engage with the robots through a naming contest: the winning submissions were Claud, Violet, Roger and Sherman. NRHS also markets the new disinfection measures with a display ‘show-bot’ in public areas, which Brawner says has gone down well with visitors and inpatients. Information cards are left for patients in rooms that have received the UV treatment; this tends to reassure them as well as providing an opportunity to educate.

“It’s important to involve the patient, to ensure they understand what’s going on around them, and what we’re trying to do to minimise or prevent patient safety events – and that includes infections,” says Smith.

The overall effects have been encouraging enough that the hospital is considering adding more LightStrike robots in the coming years to target additional areas. With several hundred facilities using these bots alone, Brawner sees a bright future for UV disinfection.

“I could see this being a requirement for acute care facilities,” he says. “I can see it expanding to ancillary areas – routine disinfection of patient care areas, off-site clinics disinfections – so it has a lot of potential.

It should not be forgotten that antibiotics once had a similarly exciting effect on bacterial populations. UV germicidal irradiation, like any other method, cannot guarantee 100% effectiveness: shadows can shield bacteria and cells can sometimes repair their fused DNA. As Brawner is at pains to explain, this technology does not – and cannot – replace current decontamination techniques.

What it does, however, is form part of a multifaceted attack, along with standard chemical disinfection and effective hand-washing protocols, in which the entire staff of a hospital must actively collaborate. In the perpetual battle against superbugs, basic hygiene will always be the most effective weapon, but UV looks set to play an important role in the future of disinfection. 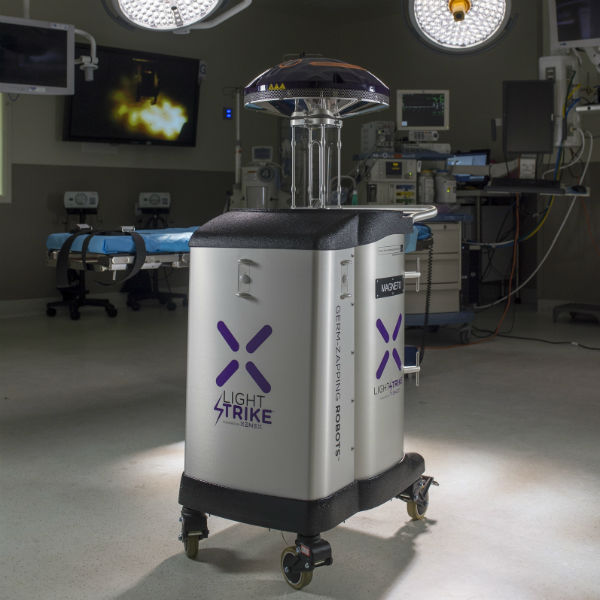 The LightStrike UV-disinfection machine does not require specialised training, making it easy to incorporate into housekeeping activities. 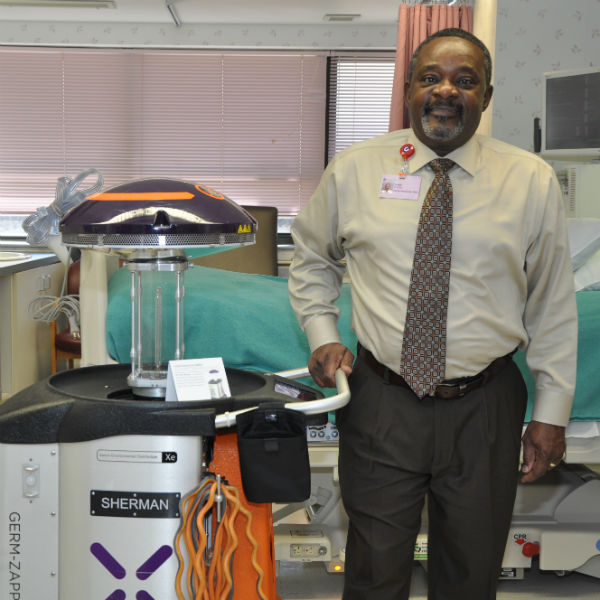 NRHS has already seen a reduction in HAIs since the introduction of the Germ-Zapping Robots. 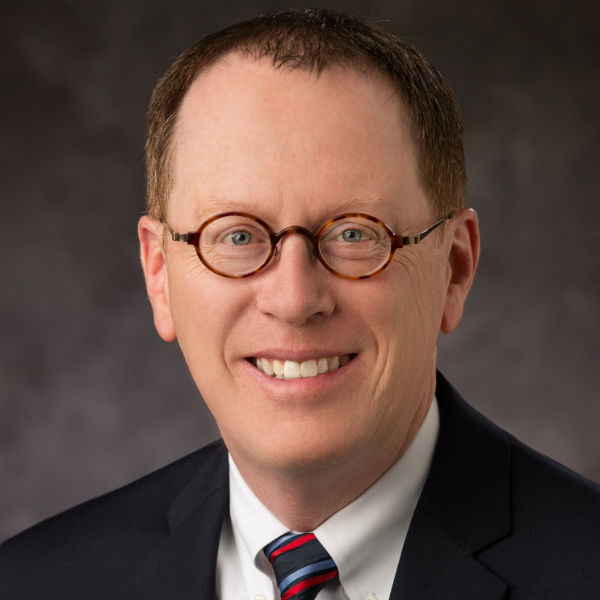 Darin Smith, Pharm.D, was awarded the Quality Professional Award by the Oklahoma Hospital Association in 2004 for his contributions in the area of quality improvement. He serves on several state boards and councils including the Hospital Advisory Council for the Oklahoma State Department of Health. 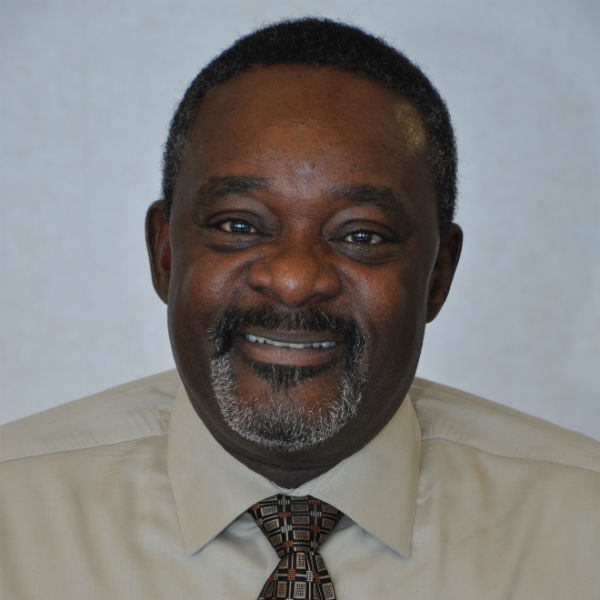 Clyde Brawner, Sr began his career at NRHS in 1981. He has a background in business administration and served with honours in the US Marine Corps. Brawner has participated in the City of Norman Leadership professional organisation and currently serves on the NRHS Infection Committee and Hand Hygiene Committee.
Post to: