A piece of the puzzle

Alzheimer’s disease afflicts roughly 10% of people aged 65 and older, and after decades of research and millions of dollars spent the quest for a cure continues. Recent advancements in molecular diagnostics, however, are yielding encouraging results in the sphere of neurological analysis. Will Moffitt speaks to Wenquan Zou, associate professor at Case Western Reserve University, about an innovative skin test that has the potential to shed light on this insidious disease and revolutionise how a range of brain disorders are detected.

The autopsy on the woman revealed a series of plaques and tangles coiled around her brain like fine clumps of cauliflower. Once a healthy, functioning organ full of sparking neurons, it was now a facsimile of grey matter.

For the neuropathologist examining her, Alois Alzheimer, these results held the key to a mystery that had haunted him for years: the curious case of Auguste Deter. Alzheimer was convinced that these plaques and tangles might account for the memory loss and erratic behaviour he had observed in Deter while she was a patient at the Frankfurt Psychiatric Hospital in 1901.

He eventually reported this discovery to a symposium of German psychiatrists in 1906, but his words fell on deaf ears. Remarkably, his initial findings were not taken seriously until the 1970s, when the disease named after him began to be categorised as a senile condition, one eventually found to account for thousands of deaths among patients over the age of 65.

Since then, Alzheimer’s has largely been redefined in the public psyche, perceived as a maleficent illness in its own right rather than an inevitable consequence of ageing, with more generous public funding and advancements in technology yielding encouraging results in the sphere of diagnostics. Most notably, an assay called real-time quaking-induced conversion (RT-QuIC) is proving adept at detecting early signs of protein deterioration in the brain.

Wenquan Zou, associate professor of pathology at Case Western University, has devoted much of his career to studying protein aggregation in neurological diseases such as Parkinson’s and Creutzfeldt-Jakob disease (CJD). He believes that while the approach is in its infancy, it holds great promise for the future.

“The deposition of misfolded tau [tangle-like protein structures] in the brain has been demonstrated to be one of the molecular hallmarks, but it has not been detected consistently in peripheral tissues and organs.”

Before Zou continues, he briefly recaps the schismatic realm of Alzheimer’s treatment where a long-established theory – the beta-amyloid hypothesis – is being called into question.

This belief, of which there are numerous subtle variations, is centred around protein fragments called amyloids, which form when ordinary proteins lose their founding structure. These protein aggregates unravel, forming deposits in plaques around cells that can disrupt functioning tissues and organs, clumping together to damage nerve cells in a manner first observed by the aforementioned Alois.

The amyloid hypothesis gathered steam in the 1980s through US neurologists Dennis Selkoe and George Glenner. Glenner’s research, in particular, investigated how these mutated proteins built up throughout the body, accumulating in the heart and kidneys causing failure in both. If this happened elsewhere, Glenner postulated, why not the brain?

Advancements in genetics also helped yield a significant breakthrough, as a hereditary link between amyloid mutation and Alzheimer’s was established. Soon enough, a body of research developed to support the development of drugs to prevent amyloid accumulation.

So far, however, after decades of research and millions of dollars spent, drugs designed to target amyloid build-up have not worked. Even worse, when they have, they have made little or no difference.

Experiments conducted on mice have indicated that symptoms such as memory loss occur before plaques form, while others suggest that where antibodies have been used against amyloid build-up, the brain shows less amyloid deposition but no change in behaviour.

“It has become customary for people to believe that amyloid is a major issue and cause of neuron death [in Alzheimer’s],” Zou says. “But recent studies also show that those misfolded proteins may not be the direct reason or the direct factor in causing neuro death.”

The root of the problem

The key word here is ‘causing’. Invariably, clumpy beta-amyloid proteins are likely to play a vital role in the deterioration process but, increasingly, researchers are turning towards another protein found in the brains of Alzheimer’s sufferers: tau, the tangle-like structures – an area in which Zou’s research is focused more specifically – which may turn out to be amyloid’s deceptive evil twin.

While roughly 30% of healthy adults over 60 have high amyloid concentrations in their brain, they may never actually develop Alzheimer’s symptoms. In fact, many will pass away before they develop any cognitive impairment due to amyloid build-up.

“It has become customary for people to believe that amyloid is a major issue and cause of neuron death [in Alzheimer’s].”

Tau proteins, on the other hand, are found across a range of neurological conditions, including Niemann- Pick disease and Down Syndrome. When it comes to Alzheimer’s diagnosis, it could be the singular thing to look for.

At Case Western, Zou and his colleagues have been working on using the RT-QuIC assay to detect misfolded protein particles, a highly sensitive method that was first developed to detect small amounts of infectious prions in patients with Creutzfeldt-Jakob disease (CJD), a fatal degenerative brain disorder.

“Currently, a definitive diagnosis of CJD is dependent on the examination of brain tissue obtained at biopsy or autopsy, and it has been impossible to detect at the early preclinical stage,” Zou says. “But by using this method we can detect misfolded proteins, such as tau, much earlier in the process.”

As with Alzheimer’s, in CJD prions often go undetected, rapidly corroding neurons, causing memory loss and, eventually, death. By using RT-QuIC technology, Zou and his colleagues were able to collect and correctly diagnose skin samples from inoculated rodents before they were evident in brain tissue.

This new RT-QuIC test is performed by mixing a regular skin sample with tau protein and shaking the mixture. Once the ordinary protein is converted into a toxic, misfolded form, the two types of particles bind together. This triggers a probe that releases fluorescent light, a reaction that can be subsequently monitored by a researcher.

Initial studies have so far been promising, with the test offering several advantages over existing methods such as brain imaging and cerebrospinal fluid analysis (CFA), which can often prove expensive, invasive and unable to detect the emergence of Alzheimer’s disease in its early stages.

“CFA is useful for diagnosis, but in order to have it, you have to have a spinal tap,” Zou explains. Inevitably, a CFA will only be granted if symptoms are severe and obvious, but in Alzheimer’s the signs rarely are.

Thanks to a grant provided by several Alzheimer’s charities, Zou is now able to expand his research to look more closely at human subjects, with a small-sample of data suggesting that misfolded tau proteins in skin samples of Alzheimer’s patients can be accurately detected.

Invariably, a pressing ethical issue raises its ugly head here. Should faster and more accurate diagnostics become available, doctors and medical professionals will be able to detect these diseases earlier and more successfully, but they will be unable to provide a cure.

While Zou acknowledges that this is a harrowing dilemma, he has faith that continued advances in diagnostics will only enhance an understanding of how enigmatic diseases such as Alzheimer’s develop.

“It’s very important to have early diagnosis because we know that once you have that damage it is always irreversible,” Zou explains. “If we can make the early diagnosis, then we can find a way to prevent the disease progressing and that might yield better outcomes, because once the neurons are severely damaged at the later stage [it is very difficult to stop].”

For now, Zou is confident that these advancements will not only lead to faster and more reliable diagnostic tools, but crucial breakthroughs in the ongoing struggle to cure a disease that afflicts roughly 10% of people aged 65 and older.

Far from solely being a diagnostic tool for Alzheimer’s, he is also confident that this particular method could herald a broader disruption in terms of how myriad neurological diseases are detected.

“Our previous and current findings suggest that the high sensitivity and specificity of skin RT-QulC assay of misfolded protein, alpha-synuclein and tau suggest that this test will not only affect the future diagnosis of prion disease, Parkinson’s and Alzheimer’s disease, but other neurodegenerative diseases,” Zou explains.

Ultimately, when it comes to the deepest, most complex workings of the brain, it could be that our skin has been holding the answers all along.

“Minimally invasive detection of proteins in the skin, such as tau in Alzheimer’s disease, could be highly valuable for diagnosis and monitoring of disease progression and efficacy of treatments,” Zou says. “Perhaps it will be the skin that will serve as a mirror through which to monitor these proteins and how they damage the brain.”

If this is the case, the work of Zou and his colleagues could represent a significant breakthrough and a valiant step forward in the ongoing battle to cure this brutal degenerative disease.

People aged 65 and older suffer from Alzheimer’s disease.
WHO

The approximate number of healthy adults over 60 that have high amyloid concentrations in their brain.
Neuropsychology Review 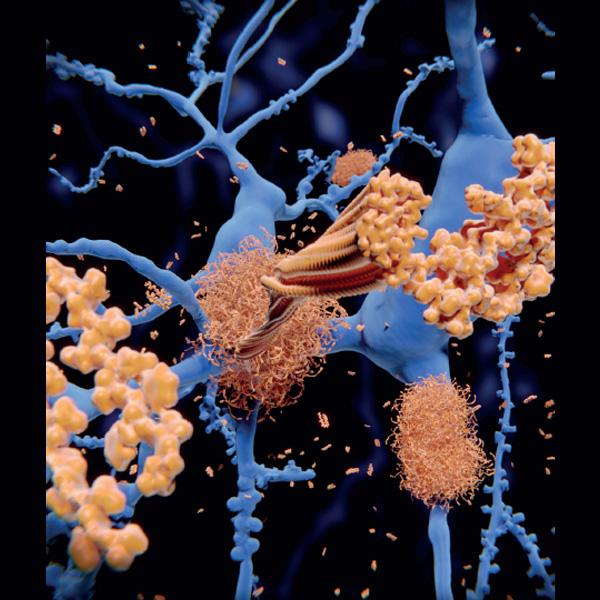 The build-up of amyloid plaques as the cause of Alzheimer’s is being brought into question by Zou’s research. 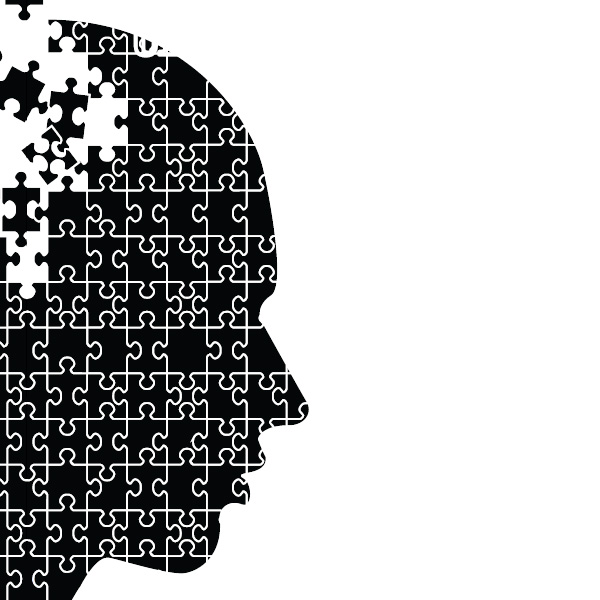