Chronic wounds come with symptoms just as foreboding as their name. For those afflicted, the regrowth of tissue either occurs at a less-than-optimal rate, or not at all – and for very deep wounds, even a skin graft may not suffice as treatment. That is, unless there is a functional alternative to human skin. Abi Millar asks researchers Professor Alan Smith of the University of Huddersfield and Guangyu Bao at McGill University how feasible artificial alternatives might be in the future.

Chronic wounds are notoriously challenging to treat. Defined as any wound that fails to heal in the expected manner, these wounds can be debilitating for patients and costly for healthcare systems. They typically occur in older patients, especially those with diabetes or other comorbidities, and can range from diabetic foot ulcers to pressure sores.

There are many steps that can be taken to manage chronic wounds, not least of which are cleaning, wound dressing, antibiotics and debridement (removing dead or inflamed tissue). Skin grafts are an option too in cases where the wound is too large to close on its own. This involves taking skin from a different part of the patient’s body and transferring it to the wound site to regenerate the damaged tissue.

However, in serious cases the wound can take years to close, with complications like infection an ever-present concern. When dealing with an especially deep wound, even a skin graft can sometimes be out of the question.

“The underlying reason why chronic wounds are difficult to treat is that they tend to be stuck in a prolonged state of inflammation, which can affect the ability of the skin cells to respond to signals that instruct tissue repair,” explains Alan Smith, professor of biopolymer science at the University of Huddersfield. “Skin grafts are the current gold standard for chronic wound repair. However, excessive pain and morbidity of the donor site are significant side effects when using skin grafts.”

He adds that the donor site is often not thick enough to be used in some wounds, as there can be significant areas of tissue damage. On top of that, donor tissue is limited, and it can be difficult to harvest more if the graft does not take, leaving the patient with few options.

The good news is that these problems may soon be overcome. Thanks to a growing wave of advanced therapies, involving bioengineered artificial skin substitutes, it may one day be possible to generate new skin for patients while sidestepping the limitations associated with skin grafts.

Together with researchers from the University of Huddersfield and Birmingham, Smith has been working on precisely such a technology. His team have designed a 3D-printed substitute that simulates the different cell types found in actual skin.

“Although a number of skin replacements exist, so far it has not been possible to replicate the compositional, mechanical and cellular structure of human skin,” says Smith. “Our research uses a specialised 3D printing technique to produce a cell containing tri-layered structure. It has biological and mechanical properties that are similar to native skin across the three layers – epidermis, dermis and hypodermis.”

To date, most skin substitutes have been designed using a biological or materials science approach. Biological approaches use cells to build skin-like constructs, but these constructs often are not thick enough and fail to replicate the complexity of true skin structure.

The approach of materials science, by contrast, can achieve the desired mechanical behaviours. However, because it uses materials like hydrogels and polymers, it generally lacks the biological stimulus required to help regenerate the tissue.

Smith’s team have bridged the gap between these two approaches by using a low-viscosity bioink containing cells suspended in a scaffold material. They have also developed a technique called suspended layer additive manufacture (SLAM) to ensure the material solidifies properly.

“Using the suspending medium allows the liquid bioink to be deposited and remain in the liquid state until the printing is complete without changing shape,” says Smith. “The printed liquid can then be solidified accordingly once printing is complete. We can create regional variations in physical, chemical and biological properties within a single construct that are more akin to native skin.”

The technique in question could feasibly be carried out in the clinic – especially as 3D bioprinting technologies progress and more personalised treatments become the norm.

“As no two wounds are the same, being able to fabricate an exact match using a patient’s own cells to enhance the regeneration of the skin, in a manner that cannot currently be achieved using a one-size-fits-all approach to wound care, is an exciting proposition,” says Smith.

Of course, that ambition is some way afield for now. While the technique achieved impressive results on excised pig skin, the researchers have not yet tested the model on chronic wounds. They hope to show that it is effective on an animal chronic wound model before moving the technology forward towards human clinical trials.

Across the Atlantic, at McGill University in Quebec, researchers have been working on a new injectable hydrogel for wound repair. This material might one day be used not only for treating chronic wounds, but also for repairing organs such as the heart, muscles and vocal chords.

“Many injectable biomaterials, mostly hydrogels, have been developed for tissue repair over the last two decades,” remarks Guangyu Bao, a PhD researcher in the department of mechanical engineering. “However, they suffer from small pore size and low mechanical toughness. The former limits the nutrients from reaching deep into the biomaterials and inhibits cell growth. The latter restricts the use of existing biomaterials for repairing mechanically active tissues. Our material overcomes these two challenges simultaneously for the first time.”

“Many injectable biomaterials, mostly hydrogels, have been developed for tissue repair over the last two decades.”

The new biomaterial has a large pore size – around 100 to 1,000 times larger than most existing hydrogels – and is around eight to 40 times tougher than the standard.

“Generating large pores is very difficult for injectable hydrogels,” says Bao. “To this end, we used a pore-forming polymer called chitosan, which is derived from crustaceans, to create large pores. To make the porous hydrogel tough and stable, we infused it with another elastic polymer to reinforce the mechanical performance.”

The upshot is that the resulting material is mechanically stable even when exposed to the harshest conditions in the human body. It was tested in a machine designed to simulate the human vocal cords, which vibrate at 120 times a second. Unlike standard hydrogels, the new material stayed intact under the duress.

If injected into the human body, the material would first provide physical support to the wounds, preventing further damage. It would then recruit cells from the surrounding tissues to remodel the wound as time goes by. Over time, the material would degrade, eventually being replaced entirely by the new tissue.

Like Smith’s material, Bao’s is in an early stage of development, but could have exciting applications further down the line.

“We will be testing our hydrogel in animals very soon,” says Bao. “We will first investigate the biocompatibility and biodegradation of our hydrogel in rat models. Later, we will be working with surgeons on vocal cord repair in rabbit models.

“If the results are promising, we will apply for clinical trials. At the same time, we are also looking into how it works for skin wound repair. We welcome collaborations with healthcare professionals to accelerate the process of moving our biomaterials for clinical trials.”

It is important to note that these kinds of technologies could have applications beyond wound healing. Smith says that his technology could be used as an in vitro skin model for studying disease, or as a platform for drug screening. Bao’s could be used within drug delivery and tissue engineering – and the team is even looking to use the hydrogel to create lungs for testing out Covid-19 drugs.

Wound healing, however, would be the priority. While conceding that it is a little early to speculate, Smith believes the patients most likely to benefit from his team’s technology would be those with severe trauma and deep necrotic wounds. In these instances, it could mean the difference between healing and having to amputate the affected limb.

“We were able to demonstrate a degree of integration of the surrounding tissue into the hypodermal layer of the bioprinted skin in a relatively short period of time,” says Smith.

“This mobilisation of tissue and rapid integration is particularly important, especially within deep wound repair.”

For the time being, these kinds of artificial skin grafts are some way from being applied in the clinic. Over time, however, biomaterials engineering could open up new avenues in the care and treatment of chronic wounds, significantly reducing the burden on individuals and healthcare systems, and giving hope to those who suffer from chronic wounds where there was none before.

What are the types of skin graft? 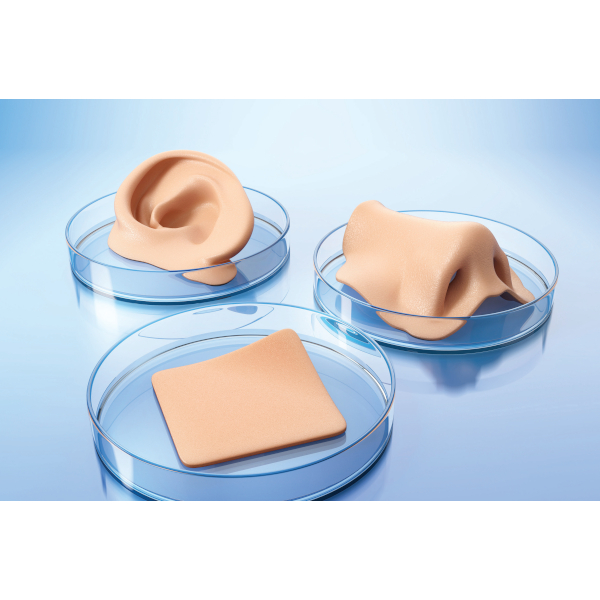 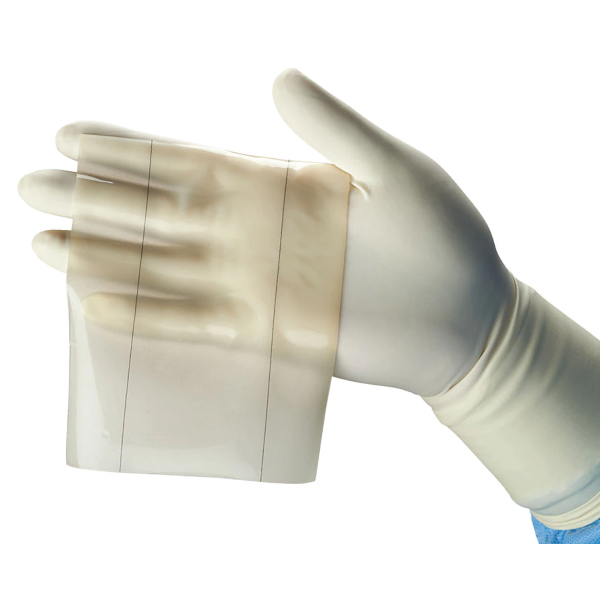 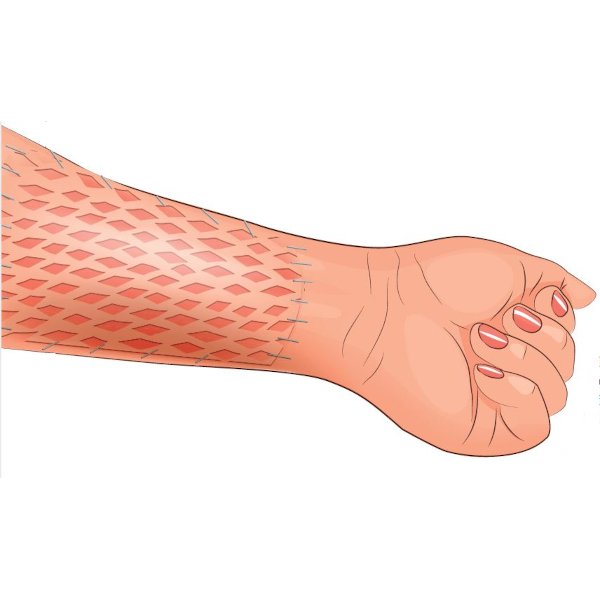