Over the past decade, we have witnessed a dramatic evolution of consumer electronics, including the emergence of wearable technology. Typically referring to electronic devices with sensing and computational capabilities that are worn by or attached to the body, these have the potential to be a disruptive force in healthcare, particularly within the operating room. Emma Green considers the potential of these technologies to enhance surgical education, intraoperative documentation and patient care.

While interest among medical professionals surrounding consumer wearable devices has precipitated widespread discussion of potential applications in surgery, evidence to support their effectiveness in this context is often anecdotal. As this technology becomes increasingly prevalent, it is essential that decisions about integrating them into clinical care are based upon empirical evidence, rather than their novelty.

Smart glasses are one of several promising wearable technologies that could be used within the operating room (OR). These tend to consist of a wire frame integrated with a computerised central processing unit, camera for point-of-view pictures, video capture and a small head-mounted prism display that sits above the right eye. They have wireless capabilities and are equipped with sensors that can exert control with voice command, touch, blinking and head movement. Although this technology has the potential to improve operating procedures, most research to date on these devices has been explorative or ‘proof-of-concept’, limiting the ability to draw firm conclusions about their effectiveness. Such studies have also highlighted a number of limitations of this technology. This includes functional issues, such as inadequate battery life, insufficient resolution and rudimentary voice control. Usability problems have also been identified, including incompatibility with surgical loupes and a mismatch between the user’s natural line of sight and the position of the display. There are also privacy concerns that have hindered the implementation of this technology into clinical practice.

“We hope our research into designing this wearable system will help to expand the range of surgical procedures that can use robotic assisted systems so that more patients and hospitals can gain the benefits from this type of surgery.” Sanja Dogramadzi, Bristol Robotics Laboratory

The case for camera systems

Camera systems have also been proposed as offering value within the OR. These are typically commercially available ‘action’ cameras often used in extreme sport photography. They usually consist of a high-definition camera, encased in a compact frame that can be strapped to either the head or body of the user. Most of the research on these devices has been clinical studies evaluating different features, which have demonstrated that the technical specifications of these systems could be adjusted to optimise both quality of picture and video capture in order to view the fine details required for use in surgery. However, similarly to smart glasses, a number of issues have been identified with this technology. Particularly significant is the lack of an integrated screen and the weight of these devices, which would prevent them being used within the OR.

66%
The increase in surgical errors due to the effect of short-term stress.
British Journal of Surgery

A number of studies have explored the potential of head-mounted displays (HMD) for surgery. These are capable of superimposing computer-generated imagery over the user’s field of view. There are two main classes of see-through HMDs – optical and video. The former allow the user to view the real world through a semitransparent mirror, enabling the superimposition of electronic images or text over the user’s natural view. The latter features non-transparent screens that instead display a video feed of real-world scene, captured with an external camera, in front of the user’s eyes. Key barriers to implementation were device ergonomics – usually weight – and usability issues – including wire connectivity and intentional blindness. There have also been documentations of negative physical side effects, including eye fatigue, dizziness and headaches.

There have been four main clinical applications of wearables within the OR. The first is communication, particularly via teleconferencing, where a live feed is provided to observers remotely using the videostreaming capabilities of a device. Teleconsultation has also been tested, where clinicians in different geographical locations discuss issues via video.

Education is another promising area. Point-of-view recording and video-steaming abilities have been identified as valuable tools for training surgeons via telemonitoring. One study by researchers from Thomas Jefferson University tested the use of smart glasses within ophthalmological surgery education. This involved an ophthalmologist wearing the glasses while performing scleral buckling surgery, a procedure with a small operative field that is not conducive to conventional trainee instruction. The device allowed trainees to visualise a video stream of the primary surgeon’s field of view on a monitor with real-time narration, thus proving a valuable learning resource.

Safety can also be aided by wearable technologies within the OR. Studies have investigated a number of devices for this purpose, including a see-through HMD for monitoring physiological data from patients that enables anaesthesiologists to limit time spent looking away from the patient. Wearables have been explored in terms of their ability to enhance efficiencies, such as the use of smart glasses to display and facilitate the completion of surgical checklists and HMSs to provide clinicians performing minimally invasive surgery with individual endoscopic displays.

Wearables also offer the potential to improve information exchange within the OR. This involves managing textual, pictorial and numerical information intraoperatively. Applications include photo documentation via both picture and video capture, voice-initiated intraoperative dictation and the collection of personal movement data to facilitate the assessment of specific surgical skills.

More recently, the use of wearable robots is being explored in surgery. A collaborative team of researchers from the University of Bristol within the UK are currently developing a system for keyhole surgery, which will offer surgeons natural and dexterous movement as well as the ability to navigate through the surgical environment. Scientists will develop modern biomedical devices that are able to replicate complex human dexterity and senses. These wearable robots can be worn by the surgeon and will transmit their movements to the closed surgical interface without restrictions, reducing their overall cognitive, manipulation and training demands.

The systems involves three pieces of hardware – an exoskeleton, an instrument and smart glasses. Exoskeletons will fit over the surgeon’s hands, controlling the instruments inside the body, This includes a newly developed surgical ‘gripper’, which mimics the thumb and two fingers of the hand. “In our project the exoskeleton will record the position of the fingers and communicate this to the robotic tools inside the body using tele-operated technology,” said Professor Sanja Dogramadzi from the Bristol Robotics Laboratory, in a 2017 video for the University of the West of England, Bristol. “We want to give existing processes a more natural interface – operating surgeons will not have to do any unusual or unnatural movement. They will be able to use their hands as they would in open incision surgery.”

The instrument, which goes inside the body, will have haptic abilities, allowing the surgeon to feel the tissues and organs inside the body, similarly to conventional surgery. The glasses will allow surgeons to position themselves anywhere in the OR. “This is an advance compared to current systems, which use a flat TV-like screen to relay images back to the surgeon,” said Dogramadzi.

Researchers will collaborate with clinicians to ensure that these are fit for purpose. “The research will use the expertise and feedback of senior surgeons to develop the tools. We will use rapid prototyping to make prototype tools that the surgeons will test and we will incorporate their feedback into the next stage of design,” said Dogramadzi. “This means we can adapt tools to the needs of different surgical procedures and this user-centred design process places surgeons at the heart of the development of this system.”

Although still ongoing, this technology offers huge potential to improve procedures within the OR. “We hope our research into designing this wearable system will help to expand the range of surgical procedures that can use robotic assisted systems so that more patients and hospitals can gain the benefits from this type of surgery,” said Dogramadzi. Wearables have also been used for research purposes. A 2018 study, published in the open access branch of the British Journal of Surgery, used technology that captured the electrical activity of a surgeon’s heart. Scientists found that during periods of short-term stress, which can be triggered by a negative thought or a loud noise, surgeons are much more likely to make mistakes that can cause bleeding, torn tissue or burns. Medical errors currently result in 250,000–440,000 deaths annually in the US, with a proportion of those mistakes occurring in ORs, highlighting the significance of the issue.

The research used a smart shirt, which was worn underneath the surgeon’s scrubs while he performed surgery. Originally designed for athletes to provide them with precise physiological data during workouts, the technology is able to measure the electrical impulses that trigger heartbeats. Using this data, lead author Peter Dupont Grantcharov was able to obtain heart rate variability information, which is a marker of momentary stress levels.

During the study, Grantcharov was allowed into the OR, where he collected laparoscopic video recordings of Dr Homero Rivas, associate professor of surgery at Stanford Medical Centre, as he worked. Another researcher reviewed the recordings and documented the mistakes that were made, and stress levels and errors were time-stamped to check for an association.

This data yielded the alarming finding that the effect of short-term stress on surgical error is as high as a 66% increase. “I was surprised by that, as well as by the amount of distractions in the OR,” said Grantcharov. “Many machines have alarms that go off periodically, equipment malfunctions, side conversations take place, people walk in and out of the OR – I could go on. My hope is that other researchers will build upon our work to make further strides in learning about the causes of stress on surgical personnel. If our study helps make the OR a safer place for patients, I’d be thrilled.”

Over the next few years, we are likely to see these technologies increasingly used not only within surgery but in healthcare as a whole. Although still an emerging field, wearables clearly offer huge potential for optimising OR procedures, saving time, costs and improving the lives of both clinicians and patients.

The SMARTsurg project to develop wearable robotics for surgery

The SMARTsurg project aims to develop an advanced system for performing R-A MIS, in order to reduce the surgeon’s cognitive load related to the system’s operation that will ultimately allow for a shorter training time, while delivering increased accuracy, safety, reduced MIS procedure time and expanded applicability.

The main vision of the SMARTsurg project is to enable complex, minimally invasive surgical operations by developing a novel robotic platform for assisting the surgeon in such tasks. This system will use highly dexterous anthropomorphic surgical instruments, wearable hand exoskeleton with haptic feedback for controlling the surgical instruments and wearable smart glasses for augmented reality guidance based on real-time 3D reconstruction of the surgical field.

SMARTsurg developments will employ a user-centred approach for efficient technology adoption and commercialisation, which will be achieved using short prototyping and testing cycles supported by focused end-user and commercials requirements. Ultimately SMARTsurg technology could provide a more dexterous, natural-to-use system with much improved interfaces that would render fast learning and acceptance by surgeons. 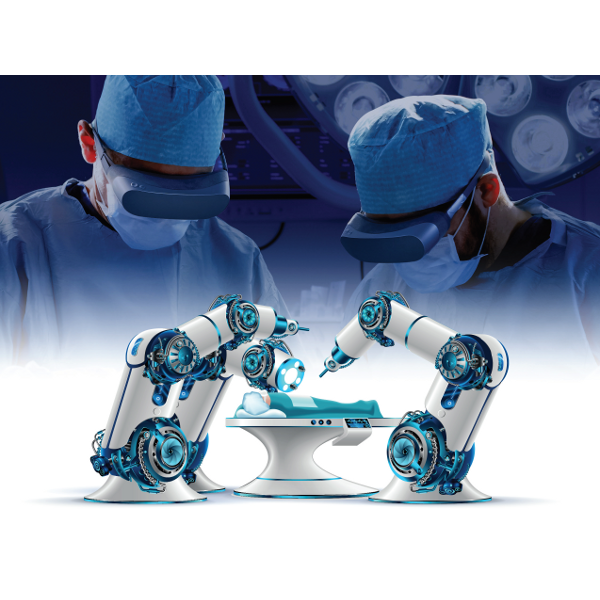 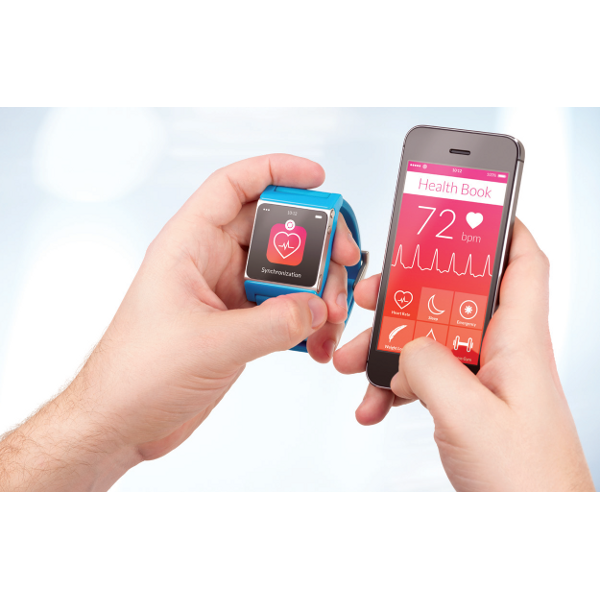 As wearable technology becomes more prevalent, it’s vital that its implementation into clinical care is based on evidence, rather than novelty.
Post to: