Though it tends to be thought of as a quintessentially Victorian disease, all dusty garrets and penniless writers, tuberculosis (TB) has remained a threat through to our own time. A full 25% of the world’s population has latent tuberculosis infection (LTBI), and 5-10% of these cases will become active, endangering millions of lives.

In developed nations, where active TB is more or less eradicated, doctors focus on hunting down cases of LTBI. This focus makes sense, says Dr Martin Dedicoat, a consultant in infectious diseases at the Heart of England NHS Trust. “If you can find these people, and treat them for their LTBI, they will not progress to active TB,” he explains. “That means no one else can catch it, and TB will ultimately disappear.”

In practice, though, things are not so simple. Because testing entire countries for LTBI is too time-consuming and expensive, doctors hone in on particularly vulnerable groups. At its most basic, this includes people who have come into contact with confirmed TB cases. More broadly, Dedicoat and his colleagues encourage the testing of HIV patients, people with kidney disease and those about to start taking biologic drugs. These patients can be up to 40 times more likely to develop fully fledged TB than the general population. Individuals with “social risk factors” are another target, adds Dedicoat, pointing to “heavy drinkers, homeless people and drug users.”

For over 100 years, doctors have tracked the aforementioned cases by using a tuberculin skin test. If the person has been previously exposed to TB, a lump will form. But as Dedicoat emphasises, this method has serious limitations. “It has operator variability,” he explains. “You might inject it wrong or people’s skin is different.” This can create false positive results in some cases. Given treatment for TB can cause side effects of its own – notably liver disease – old-fashioned epidemiological tests risk cutting the life expectancy of patients who have never had TB. 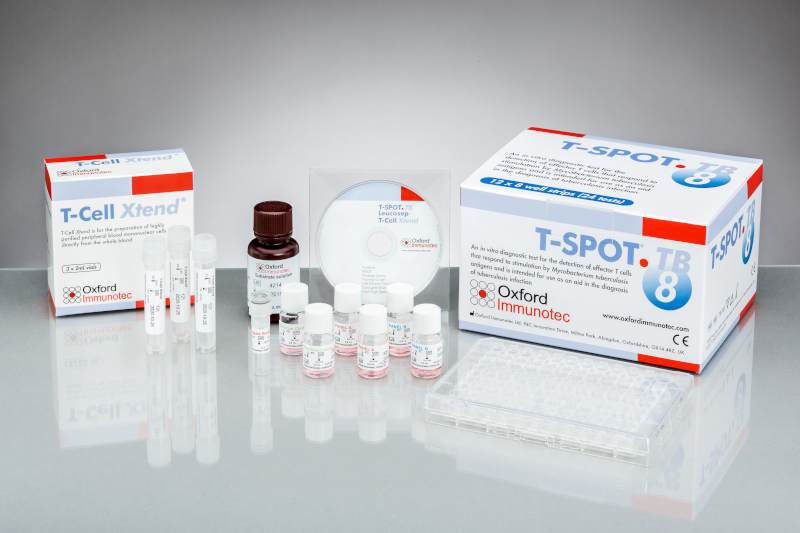 One solution is the so-called interferon-gamma release assay (IGRA) method. Rather than messing around with patients’ skin, IGRA testing is done in vitro. “What the IGRA test involves is that you take a patient’s blood, isolate their T-cells and stimulate them with TB proteins,” Dedicoat explains. “If the patient’s lymphocytes have been exposed to TB before, it’ll react and release interferon gamma, which can be detected with a colour change or by looking at spots on the bottom of a 96 well plate. You can count the spots and quantify how much interferon gamma is released.”

Two IGRA tests are currently available. One is called T-SPOT.TB, developed by Oxford Immunotec. IGRA has improved TB diagnostics, for example by preventing cross-reactivity to the BCG vaccination.

A quarter of the world’s population has latent tuberculosis infection (LTBI), and 5-10% of these cases will become active, endangering millions of lives.

Although IGRA can accurately inform doctors if someone has TB infection, alone it cannot distinguish active from latent disease, nor predict the risk that latent TB will develop into the more dangerous form of the disease. However, Oxford Immunotec is working assiduously to improve the T-SPOT.TB test, and Dedicoat notes that tests predicting risk have already been done “experimentally”.

Given its successes already – the T-SPOT.TB test was licensed by FDA in 2008 – there is every reason to hope that Oxford Immuntec can offer a risk-prediction test soon. For his part, Dedicoat is enthusiastic about what the future might bring. “A test with inbuilt risk prediction would help us prioritise who we treat,” he says. Combine these timesaving advantages with the cost-effectiveness of better testing and it appears there is every reason to share his excitement.