Dr David Freger hated pricking his fingertips to measure his blood glucose levels. To avoid doing so, he combined his patented ultrasonic technology, used for non-invasive measurements of industrial containers, with two additional technologies. After a series of tests that began in Freger's kitchen, the GlucoTrack concept was created. The device is CE mark certified and in the pre-submission phase with US FDA.

The trio of technology

What makes GlucoTrack unique, besides its non-invasiveness, is that it does not use optical technologies, which failed in previous attempts from other medical device companies.

"Practically none of the companies succeeded in developing such a device and, with the current trials, there don't seem to be any products ready to sell," Malka says.

Another significant factor in GlucoTrack's success is the combination of three separate technologies - not to measure blood glucose, but to measure changes in tissue properties as a response to glucose concentrations.

GlucoTrack is composed of the main unit and an ear clip (sensor). In order to perform a glucose measurement, the ear clip clips painlessly to the user's earlobe; a glucose reading is ready in about one minute. The main unit provides a visual and audible result. The combination of three technologies - ultrasound, electromagnetic, and thermal - with a proprietary algorithm produce an accurate glucose reading.

By measuring yourself more often, you are becoming more aware of your condition and better equipped to manage it.

"Our main purpose with GlucoTrack is to encourage users to measure themselves as often as they want without limitations," Malka says.

This works on a practical level as there is no longer pain from needle pricks, or test strips or lancets to dispose of. The main unit supports up to three users in parallel, although each user needs their own ear clip, as it requires individual calibration. The device shows results in an easy-to-read format and stores up to 1,000 readings for each user, displaying individual glucose profiles.

On a more holistic level, regular measurements are good for patients' overall health. Malka refers to a large body of supporting research declaring that, regardless of diabetes type or treatment, if diabetics measure themselves more frequently, their glycated haemoglobin levels will reduce respectively.

"It means that by measuring yourself more often, you are becoming more aware of your condition and better equipped to manage it," explains Malka.

Integrity Applications, based in Ashdod, Israel, is led by John A Graham, CEO, chairman and director of the company, along with Malka. Graham recently joined Integrity Applications. They are both excited about the future of GlucoTrack, which continues to push the levels of innovative technological development with the Soroka University Medical Center in Beershaba, Israel.

GlucoTrack Model DF-F is currently intended for people with type 2 diabetes and prediabetes, 18 years old or older. The company already has a well-plotted product roadmap laid out, including devices for developing countries, night-time advanced warning of hypoglycemic episodes, the ability to warn drivers of low glucose levels and paediatric incubators.

Before Freger died, he ensured that his vision, which in hope of finding a better way to manage his condition, led to a major shift in diabetic treatment. With over 14 years of research, Integrity Applications developed a noninvasive, pain-free device to eliminate unnecessary suffering for diabetics. 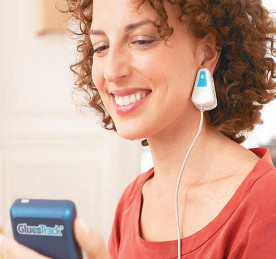