Assessing the best form of packaging in which to contain contrast media can be a time-consuming and confusing business. This is why, as Philippe Schiesser, Sylvain Grelet and M'Hamed Belhanafi from Ecoeff explain, Guerbet devised its simplified, single-score comparative life-cycle-assessment process when comparing the environmental impact of its polypropylene ScanBag packaging with traditional glass vials. But which came out on top?

Guerbet is a pharmaceutical group fully dedicated to medical imaging. It innovates, develops and manufactures contrast products and injection systems, and offers a full range of contrast agents for MRI, X-ray and interventional radiology. The group has a direct presence in key markets.

At the end of 2006, Guerbet launched its innovative ScanBag polypropylene packaging.

In 2009, the company completed a comparative life-cycle assessment (LCA) of two packaging solutions for its XenetiX contrast agent. During this study, environmental impact calculations were made using the 11 indicators devised by the Institute of Environmental Sciences at the University of Leiden, the Netherlands. This reliable and comprehensive method lists 11 environmental impact indicators that focus on climate change, resources depletion, pollutant emissions, human health and ecosystems protection.

Two years later, Guerbet decided to update this LCA in order to take into account the latest recommendations made by the European Commission in its life-cycle thinking and packaging reports, and International Reference Life Cycle Data System (ILCD) Handbook 2010. The number of environmental impact indicators was then reduced from 11 to five, maintaining a focus on climate change, resources depletion, pollutant emissions (photochemical oxidant formation and freshwater eutrophication) and human health (ionising radiation).

In 2013, Guerbet released an update of this study, based on ReCiPe methodology, in which the comparison of the two types of packaging was considered in relation to a single environmental indicator known as the 'single score'. Impact category indicator results can be chosen either at the mid-point or end-point level. The weighting of impact categories generates a single score (see figure 1).

Two types of packaging can be assessed by comparing the calculated impacts in each of the impact categories, but this can be a time-consuming, expensive and confusing process.

The assessment applies to five European countries (France, Germany, Italy, Spain and the UK) at each stage of the product life cycle (manufacturing, transportation and end of life). This study was performed in accordance with ISO 14040/44 standards on the basis of a single score, which offers the advantage of being easy to use in terms of decision support, commonly used in eco-efficiency studies and useful for ISO 14045-standard compliance.

Life-cycle assessment is a multicriteria approach. The functional units concerned were 1,000L of Xenetix contrast agent contained within 100ml of single-use packaging in the form of a glass vial or polypropylene ScanBag. After obtaining results in the end-point impact category, the single scores were calculated.

The single-score results on the LCA of the two packaging forms, ScanBag and glass vials, are shown in figure 2.

It was revealed that environmental impact is greatly reduced through the use of the flexible ScanBag. This reduction is roughly 40%, whatever the country of use, according to the single-score calculation (France: -36%; Germany and the UK: -39%; Spain: -40%; and Italy: -41%).

The single score can also be defined at each life-cycle phase (manufacturing, transportation and end of life), as seen in figure 3. In terms of life-cycle phases, manufacturing makes the greatest contribution to the environmental impact of both packaging forms. ScanBag's contribution is lower, however, than that of the glass vial. The difference is due to the packaging weight: at 8.6g, the 100ml ScanBag is 11 times lighter than the 100ml glass vial, which weighs 102g.

Concerning end of life, environmental impact is driven by energy recovery in the form of heat and electricity, which is carried out according to the country's energy mix. The polypropylene ScanBag has a high calorific value of 32.78MJ/kg, meaning the amount of energy recovered is greater than that recovered from the incineration of the glass vial, which has a low calorific value of 0.14MJ/kg. This reduces the overall score of the ScanBag against the glass vial.

Compared with the glass vial, the polypropylene ScanBag is the best choice from an LCA point of view. This is summarised in its single score of a 40% lower impact on the environment and is confirmed at each phase of the LCA: manufacturing, transportation and end of life.

It will thus be easier, thanks to ScanBag's environmental single score, to compare different solutions across a large portfolio of scenarios. In the coming months, an eco-efficiency study will take place to highlight the economical and environmental qualities of ScanBag vs the glass vial, and provide a broader view of its life-cycle stages from a user perspective. 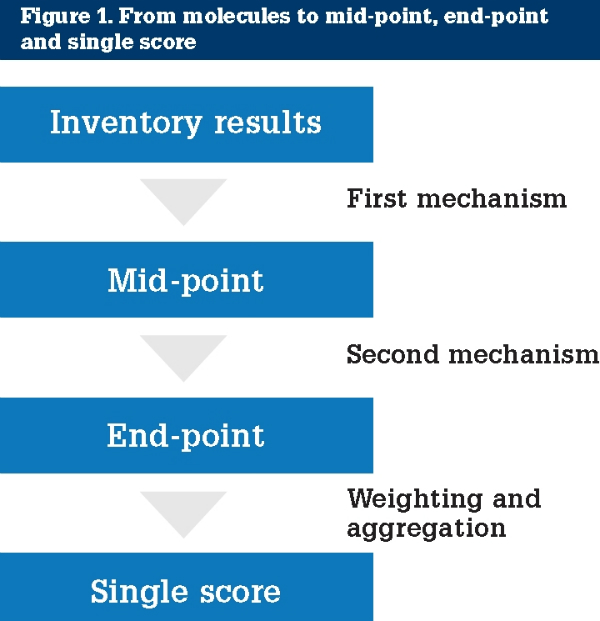 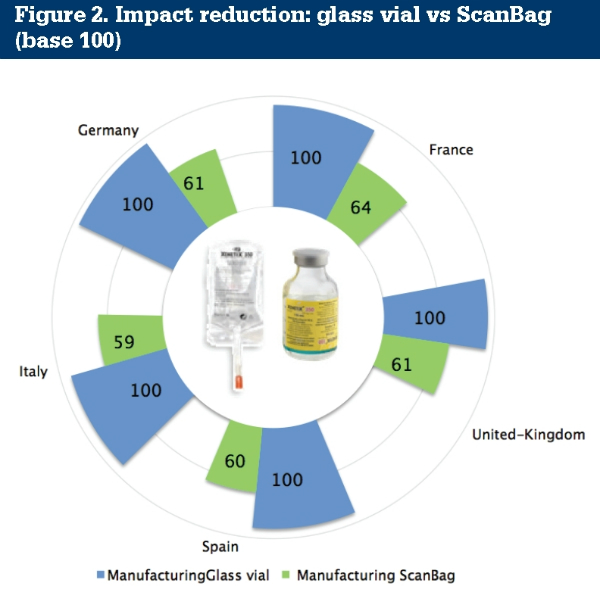 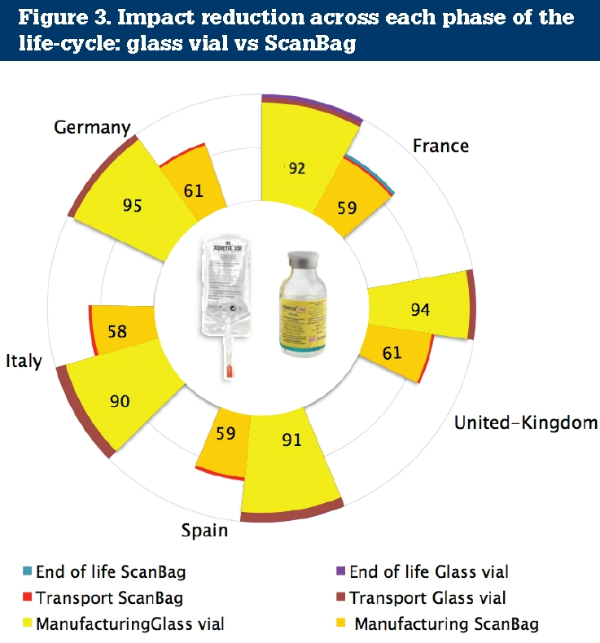