Can you explain the current status of antimicrobial resistance (AMR) in healthcare facilities across Europe?

Dr Frédéric Laurent: Up to now, the prevalence of methicillinresistant Staphylococcus aureus (MRSA), is decreasing in Europe but remains a public health priority. For Enterococcus faecium, significantly increasing trends of vancomycin-resistant enterococci (VRE) have also been noted in seven out of 25 countries surveyed.

The most worrying situation, however, involves Enterobacteriaceae. In the case of Klebsiella pneumoniae, more than a third of the isolates reported to the European Antimicrobial Resistance Surveillance Network in 2016 were resistant to at least one of the antibiotic groups under surveillance, including third-generation cephalosporins or carbapenems. Combined resistance to three or more of the antimicrobial groups was the most common resistance phenotype. For E. coli, resistance to third-generation cephalosporins and combined resistance to third-generation cephalosporins, fluoroquinolones and aminoglycosides increased significantly in Europe between 2013 and 2016. Finally, if carbapenem resistance in E. coli, K. pneumoniae or Enterobacter spp. (CPE) remain rare here, it is still rising in a small group of countries. National medical authorities in the MENA region have reported considerably higher carbapenem resistance percentages for K. pneumoniae. Based on population exchanges and globalisation, this is a major source of concern.

What is the economic impact of AMR in the context of hospitalised patients?

Studies of the economic impact of resistance have usually focused on hospital charges and length of stay, features that are objective and relatively easy to measure compared with other aspects of impact. Recent studies have also included estimates of increased hospital or other institutional stay, incremental specific treatments, and additional diagnostic tests. These can include laboratory tests, radiologic studies, bronchoscopies or other diagnostic procedures that are part of diagnostic costs, and are primarily of concern to the healthcare institution. Indirect costs, including societal individual cost, such as loss of productivity, long-term incapacity for work, or partial or total disability, should also be taken into account.

How could facilities reduce costs associated with AMR? What are the roles of the clinical microbiology lab in that context?

Above all, the objective should be for each facility to reduce the misuse and overuse of antimicrobials. This is the best way to decrease the antibiotic pressure that promotes the emergence of resistance mechanisms and resistant bacteria. The second step is to rapidly identify patients that have been infected or colonised with multidrug-resistant bacteria and to rapidly adapt antimicrobial chemotherapy. It is also necessary to quickly isolate the patient to limit transmission and prevent outbreaks. In this context, the role of the clinical microbiology lab is to provide the appropriate rapid detection and confirmation of the AMR.

What are the unmet needs of the microbiology lab in that context?

For the screening of MDR carriers, we use cultures on selective media for 24-48 hours. A confirmation is classically acquired using either a phenotypic test that is cheap, but requires four to 24 hours, or a molecular test that is expensive, but available in one to two hours. Molecular tests can be performed directly on the specimen. For infected patients, antimicrobial susceptibility tests allow the identification of resistances, but for VRE, extended-spectrum beta-lactamase (ESBL) or CPE, a conformation is needed, and requires additional phenotypic or molecular tests for screening after culture on selective media.

Could the new RESIST-4 OKNV test from Coris BioConcept answer that unmet need? How could you recommend the routine use of that new rapid test?

The new RESIST-4 OKNV test allows the confirmation of the presence of four of the most prevalent carbapenemases harboured in Enterobacteriaceae: OXA-48, NDM, KPC, and VIM. This immunochromatographic test, performed directly on the bench using few colonies, is simpler and more affordable than molecular tests. The result is available in 15 minutes.

After we suspect the presence of a carbapenemase, based on an antimicrobial susceptibility test or after isolation on selective media in the context of carriage screening, we use RESIST-4 to test for Enterobacteriaceae belonging to group one and two (mostly E. coli and K. pneumoniae) to confirm and identify the bacteria. For Enterobacteriaceae belonging to group three, for which de-repressed cephalosporinases combined with impermeability are more prevalent, we chose to emphasise phenotypic approaches. 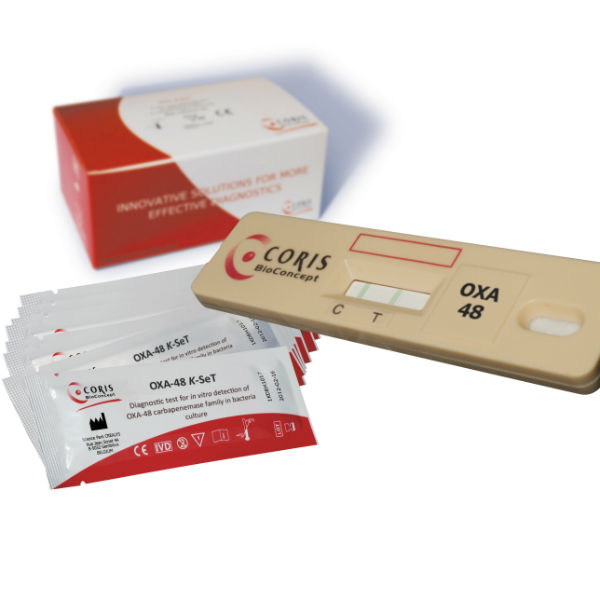