Konica Minolta has led a prestigious London hospital into the digital age with an overhaul of its radiography systems that has improved image quality and hastened patient throughput.

St George's Hospital in south-west London is one of the UK's most prestigious teaching hospitals.

As one of London's four major trauma centres, serving almost a fifth of the city's 7.7 million population, it has more than 1,000 beds and a staff of over 8,000.

Not only is it an important hospital in the capital, but it has regional and national importance in the UK for its cardiac and cancer care, as well as neurosciences. It also has one of London's eight hyper-acute stroke units and offers wider services such as accident and emergency, maternity care, and care for older people and children.

It shares the site with St George's, University of London, an esteemed educational establishment boasting alumni such as John Hunter, renowned as 'the father of modern surgery', and Edward Jenner, creator of the smallpox vaccine. The university trains medical students and carries out important medical research.

When St George's needed to improve the speed and quality of its radiography by moving from computed to digital radiography (DR), it undertook a detailed assessment of all available systems. This included on-site clinical evaluations and visits to other UK hospitals.

The hospital's desire to speed up and improve its throughput saw it take the natural step into DR. In doing so, after a thorough market appraisal, it selected Konica Minolta, a supplier with a rapidly growing reputation across the UK's National Health Service for its high-performance digital diagnostic X-ray imaging systems.

Sue Baillie, St George's superintendent radiographer, says: "As one of London's leading hospitals, there was a clear need for us to move towards digital radiography. There were several critical drivers behind this decision. Increasing the efficiency and speed of our operations was of course important, but at the heart of it was the desire to reduce waiting times and improve the patient's experience of our service.

"We began by trialling Konica Minolta's AeroDR retrofit and we saw an immediate difference in the speed of service and waiting times. Ultimately, it made it a very easy decision to buy from Konica Minolta."

The AeroDR, retrofitted on a Philips analogue X-ray unit, uses one of the world's lightest wireless flat-panel detectors and can generate images in under two seconds. It also greatly reduces the dose of radiation that the patient is exposed to.

The retrofit solution enabled the conversion of an existing analogue room to direct digital with minimal disruption.

Prior to opting for the X70, a team from St George's visited another large NHS site, Bradford Royal Infirmary, the first UK site to install the X70, 18 months ago.

Baillie and her team were able to quiz users about the equipment's performance and the support from Konica Minolta. The positive feedback was a factor in the selection of the X70.

The effect of the new DR equipment at St George's has been significant and widely praised by the hospital staff. Radiographer Myles Afful says the ease of operation for the user is helping reduce patient time in the X-ray room.

"We have knocked two minutes off the time taken to do a chest X-ray," he explains. "As a result, patient perception of our service is much improved."

Colleague Mayuri Patel praises the "excellent" image quality, while Tareq Uzzaman has been impressed with the quality of the Konica Minolta equipment. He says: "The detector is extremely robust and the lightness of the detector was also very noticeable when compared with other trials."

The overall result for St George's radiography has been improved image quality with a lower radiation dose and faster patient throughput times. This has produced a welcome domino effect on outpatient clinic timings with patients spending less time in the radiology department. 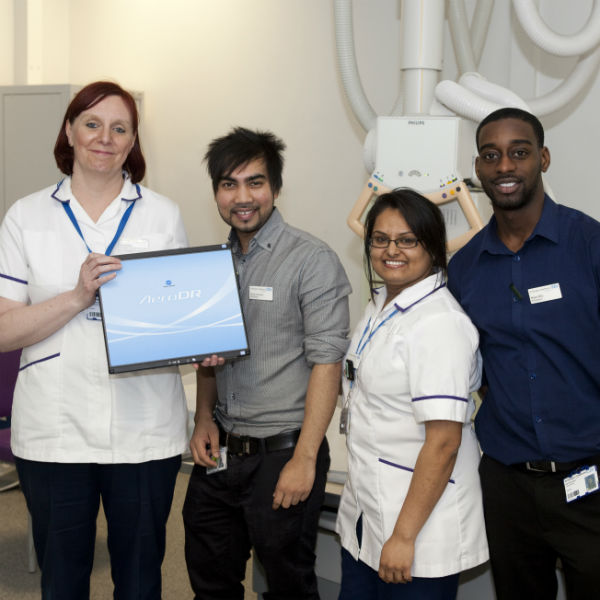