There are surely better uses for the hundreds of hours spent transporting samples, medicines and other goods between hospital departments. Winfried Oberstadt, marketing manager at Telelift, introduces a way to streamline operations with a built-in smart-rail system.

Tell us about Telelift and its transportation solutions.

Winfried Oberstadt: Telelift is a 50-year-old company with 110 employees and more than 1,500 systems - around 500 of which are installed in hospitals - in 41 countries.

The Telelift electric track vehicle (ETV) is an automated monorail conveyor system that allows users to send hospital goods quickly and smoothly throughout the building. It enables three-dimensional traffic routing, and all transport logistics are 100% monitored, with secure locks and hygiene features on every container. Telelift ETVs not only save time, but also reduce loss and contamination.

What are the ETV's major benefits?

ETV technology executes comprehensive transport logistics for loads of up to 15kg in hospitals. It transports five times the number of items and 20 times the weight as a pneumatic tube system (PTS) can each day. It is the next step for fully scheduled processes in hospitals. By relieving most manual porters of the task, an ETV reduces the risk of distributing germs and bacteria, while freeing up medical staff to dedicate their time to patient care. It is also capable of safely transporting blood, whereas a PTS is not.

How long has Telelift been working in the Middle East?

Due to the business strategy of its previous owner, Telelift has been absent from the Middle Eastern market for the past 15 years. Under the guidance of a new owner, Telelift has since gone back on the medical market, and now sells about 25 ETV systems to hospitals a year. April 2016 marked the start of the company's operations in the Middle East; its partners, who are in charge of approaching potential clients and architects, are Aamal Medical in Qatar and Hazem Brothers in Kuwait.

How did Telelift update the ETV when it re-entered the healthcare market?

Some big changes have occurred. Today, Telelift can provide 100% monitoring, as well as other features that are attractive to the medical field, including better hygiene measures, identity handling via RFID, and an increased maximum payload of up to 15kg. The company has also lowered maintenance requirements - a decrease of 40% compared with requirements in 2000 - and provides a global service network, either using Telelift's own technicians or via certified partners. With these developments, Telelift has quickly restored the status of the ETV system as a cost-efficient, high-end application.

Take us through some of the latest enhancements to the product.

Telelift has enhanced its technology significantly in the past few years. It designed a new trolley generation with an antimicrobial coating, a modern swivel box for transport of liquids and sensitive goods, UV-C application inside the container, a brushless drive, some additional software features, a new 10in station-terminal display, a new segment controller, and more. Telelift systems also use only a tenth of the energy that a PTS would use to accomplish much less transportation, so ETVs can make a hospital's operations significantly more environmentally friendly. The systems were originally designed for library and administrative use, but they were soon identified as a perfect logistics solution for modern hospital applications.

What feedback has Telelift had from Middle Eastern clients?

Telelift is currently focusing on new healthcare projects, and is always hearing from potential clients who had not known about Telelift earlier and think it's a pity that their hospital has been built already.

What challenges does Telelift often come up against?

The biggest challenge is that the installation of a Telelift system has to be considered at an early phase of hospital design. Architects may need to relocate departments, for example. Installation and commissioning is never a problem because the Telelift system is installed and operates almost entirely in areas where no other technology is installed, except for a small shaft.

What are the company's plans for the future?

The system is definitely up to date for hospital applications, but requests and feedback do come in from time to time. Clients have suggested upgrades such as fingerprint access to stations, camera supervision and delayed transportation of special goods. The Telelift team is prepared to address these challenges and lead the way in innovation. 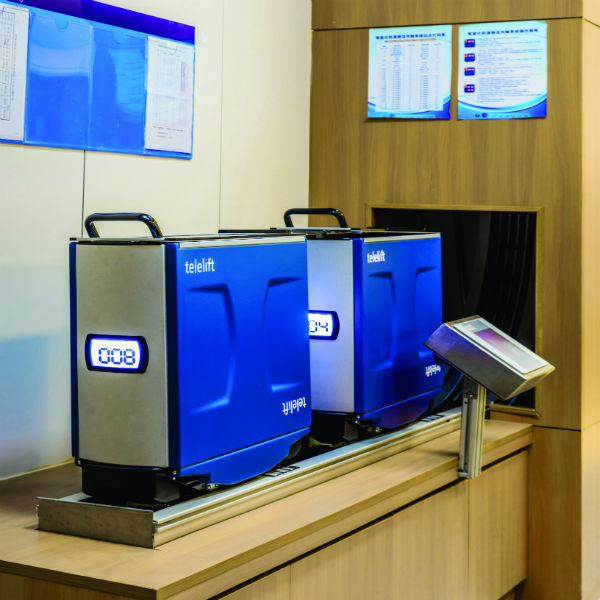 The Telelift ETV is an efficient and secure automated monorail conveyor system designed to minimise risk of contamination. 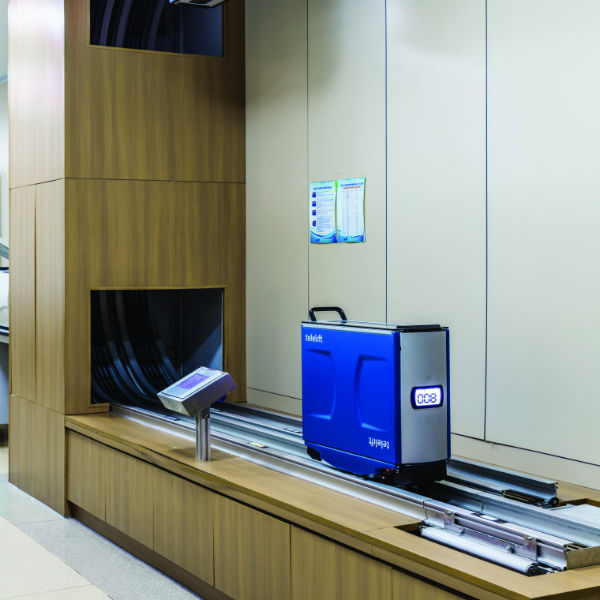 Telelift systems fit seamlessly into the hospital design, and include features such as antimicrobial coating to meet sterilisation standards. 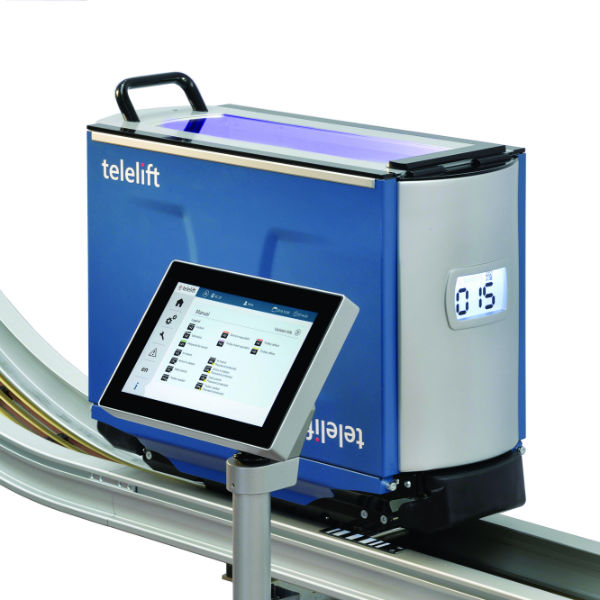 A user-friendly 10in station-terminal display is one of the new features.