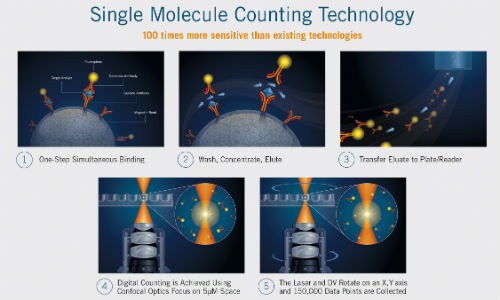 A missed diagnosis of Clostridium difficile infection can cost a hospital tens of thousands of dollars, Dr Glen Hansen, associate professor at the University of Minnesota, tells Practical Patient Care. Now, with physicians still struggling to accurately spot and treat patients suffering from this difficult-to-detect illness, a pioneering detection method developed by immunodiagnostics company Singulex may offer healthcare professionals a better weapon in their battle against the disease.

C. difficile infection (CDI) is a type of bacteria that infects the bowels and causes a wide range of symptoms, including fever, loss of appetite, a rapid heart rate, abdominal cramping, nausea and watery diarrhoea. The disease most commonly affects people who have recently taken a course of antibiotics in a hospital or care home environment. What’s more, C. difficile is difficult to detect accurately without testing, precisely because of the number of ways the illness can manifest itself.

Medical firm Singulex are now claiming a significant breakthrough in the fight against it. The corporation is pitching its investigational Singulex Clarity C. diff toxins A/B immunoassay as a way to perform rapid ultrasensitive precision measurement of specifically chosen biomarkers, which quickly reveal whether or not CDI is present in patients’ samples. According to medical expert Dr Glen Hansen, an associate professor at the University of Minnesota and the medical director for the Clinical Microbiology and Molecular Diagnostics Laboratory at Hennepin County Medical Center, the new device should be seen as a powerful addition to hospitals’ arsenals.

Hansen explains that the history of CDI testing is marked by two problems which persist down into the modern era. The first is the battle to correctly identify the malady before an outbreak scenario occurs, particularly among at-risk groups, which is especially pertinent as the current generation of commercially-available diagnostics tests are lacking in specificity to the infection. The second issue is the struggle to prevent the pendulum swinging too far in the other direction and over-diagnosing every case of diarrhoea as a symptom of the disease.

Although it is believed that the sickness is largely confined to hospitals, there is some evidence that more people from the community may be at risk of catching C. difficile than was previously thought. Meanwhile, a number of different groups in the clinical space remain particularly vulnerable to the infection, including patients who have received previous courses of antibiotics. CDI also tends to show up in cases such as transplant patients, acute illness sufferers and people who are on the polar extremes of age.

Detecting C. difficile is based on the premise that it is a toxin-mediated disease. Scientists say the organism behind the sickness produces a number of these poisons, typically classified as either toxin A or B. Each can disrupt the integrity of the mucosal membrane, often leading to diarrhoea in the patient. As previously mentioned however, the symptoms of the illness can manifest themselves in a much wider spectrum, from fever to watery diarrhoea. Moreover, there are also cases of individuals who can appear asymptomatic, while still having been colonised with toxigenic CDI.

“Earlier generations of C. difficile tests relied exclusively on toxin A as their primary target,” Hansen explains. “Many of these were early immunoassay antibody tests, and we have come to learn now with outbreak scenarios that there may be a small percentage of the population, around 5–15%, that carry only toxin B,” he reveals. “Most assays now rely on either a combination of detecting both toxin A and B, or toxin B alone. The risk of missing toxigenic cases by targeting only toxin B is relatively small, certainly less than 1%. So, most commercial laboratory-based assays demarcate toxin B as their primary target.”

According to Hansen there is still a debate within the medical community over whether or not the detection of a gene on a molecular assay – toxin A or B – is more likely to spot an infected patient than testing for the by-products of that gene. This is typically based on the type of immunoassay style detection Singulex is offering with its Clarity diagnostics platform.

“There are a number of high-profile studies, one in the UK and one here in the US, showing that free toxin detection is more closely associated with the disease than not,” Hansen says. “The reason that those findings come out that way is that we tend to see acute disease associated more with higher levels of toxin. It’s not always that simple, but certainly if you have higher levels of toxin, you are at higher risk of having significant levels of infection. So, free toxin testing is first the idea of testing the actual production of the toxin in a diagnostic specimen versus solely the genetic gene of it.”

Testing for C. difficile has gone through a number of different iterations. Since the discovery in 1978 that the bacterium was associated with human disease, several generations of tests to identify it have fluctuated in popularity. However, Hansen is enthusiastic about the abilities of Singulex’s new development to improve staff detection rates of the malady in health institutions.

“Detection is at the heart of what makes CDI such a contemporary issue, because the illness associated with CDI can range from very mild asymptomatic diarrhoea, that presents as a couple of bowel movements in a 24 hour period, to a life-threatening sickness,” Hansen declares. “So the spectrum of disease that we see with CDI is much larger and wider than we deal with in other infections,” he continues. “Normally we rely upon laboratory testing, but it needs to be in conjunction with the clinical perspective of whether or not a treating physician believes that a patient's diarrhoea could be attributable to CDI, because there is a wide spectrum of symptoms that we see with patients.”

Hansen’s general perspective is that Singulex’s new device could provide busy doctors with a rapid multi-functional assay that allows them to investigate incidents of CDI among hospitalised patients in a highly sensitive and rapid fashion. Anything that can reliably detect free toxin levels at a level of sensitivities which matches molecular based testing is an improvement over current standards, and advancement in the fight against C. difficile.

Indeed, the Clarity C. diff toxins A/B assay specifically aims to be the first ultrasensitive test to market that offers both physicians and laboratorians the specificity intrinsic to toxin tests, but comes with a level of sensitivity which rivals molecular methods. The firm says that findings in previous studies have demonstrated that, when compared with other currently available testing options, the Singulex system offers its clients quicker results, better sensitivity and enhanced specificity in the detection of both types of toxins associated with the presence of C. difficile in stool samples.

Hansen stresses how important a contribution to the field of C. difficile detection he hopes the Singulex Clarity C. diff toxins A/B immunoassay could make. It can bring together the sensitive testing required with the ability to tie free toxin-based tests to patients' samples, providing doctors with a better understanding of how laboratory testing procedures may evolve in the future.

“This is a very unique assay that allows us to be able to interrogate the ability of a diagnostic specimen at a single molecule level, to look for a more reliable clinical marker, which is free toxins, at a level in which the sensitivities can now match molecular based testing,” Hansen says. “When hospitalised patients have really true signs of symptoms of CDI, we don't want to run into a scenario where we are missing these diagnoses.”