Traditional methods of diagnosing patients with neurological diseases have a number of issues for healthcare professionals and patients. Over recent decades, there has been an increase in the use of blood tests, which can measure important biomarkers in a non-invasive and cost-effective way. Emma Green speaks with Niklas Mattsson, associate senior lecturer at Lund University and physician at Skåne University Hospital in Sweden, about the potential of these newer methods to improve our understanding of neurological diseases, as well as informing diagnosis and treatment.

There has been a significant shift in recent years within diagnostics, particularly for neurological conditions. Historically, there was a reliance on tools, such as clinical assessments, cognitive tests and structural imaging methods, such as CT or MRI. However, there has been an increasing realisation that it is possible to study the pathologies that occur in the brain using a number of different biomarkers, including through blood tests. The use of these more objective methods has transformed research and clinical practice.

In parallel with these changes, there has been an increased understanding about the nature of neurological conditions. There is now widespread agreement among researchers that Alzheimer’s disease, the most common type of dementia in older adults, is caused by the accumulation of beta-amyloid and tau proteins in the brain. It thus makes sense to measure these protein aggregations to identify the presence of the disease.

Despite being fairly common in many countries in secondary or tertiary healthcare, the use of biomarkers remains relatively rare within primary care. For example, in Alzheimer’s disease, diagnosis is still heavily reliant upon cognitive tests and relatively crude clinical assessments. These are problematic because the clinical presentation of symptoms can be hugely variable. It can therefore be difficult to discern whether these are due to a neurological disease or have another underlying cause, which has implications for treatment.

Niklas Mattsson, associate senior lecturer at Lund University and physician at Skane University Hospital in Sweden, is passionate about incorporating more objective measures into primary healthcare, particularly the use of blood tests to measure important biomarkers of neurological conditions. In light of the potential of such methods to revolutionise diagnostics and treatment, it is hard to understand why these are not more widely used within primary healthcare.

“The kind of biomarkers we are talking about, including cerebrospinal fluid and advance imaging for beta-amyloid, tau and neurodegeneration, are expensive or have low availability or may be cumbersome to perform,” explains Mattsson. “I think that has held back the use of biomarkers in primary care.”

For these reasons, measuring these biomarkers via blood tests is particularly promising. “There are a lot of interesting papers in the literature now about biomarkers in plasma or serum that seem to perform reasonably well in terms of capturing these changes in the brain of patients with neurodegenerative diseases,” says Mattsson. “I think it is a really exciting development.”

Mattsson’s work has primarily focused upon Sporadic Alzheimer’s disease, the most common form of the condition. “I’ve been very interested in the early stages of the disease when patients have very mild symptoms or even the preclinical stage before the person has developed any symptoms at all,” says Mattsson. “We think that the disease starts in the brain, years or even decades before you have any symptoms, with a slow build-up of protein aggregates.”

He has explored a number of different biomarkers in order to determine which are the most beneficial for diagnosis and treatment. “I have worked mainly with biomarkers in fluids, so cerebrospinal fluid and increasingly blood-based biomarkers, and I’ve also worked with imaging biomarkers, mainly PET imaging of these pathologies, beta-amyloid and tau,” says Mattsson. “I have been comparing these modalities with each other and trying to understand when they are altered in people with the disease, the pros and cons of using different methods to identify the disease, considering how these can be used in a clinical setting and also for drug development.”

For example, one challenge of measuring biomarkers in cerebrospinal fluid, which requires a lumbar puncture, is that it demands expertise to be performed and analysed effectively. “It can be difficult to do at a primary care centre, so perhaps it’s something that is better done within a neurology clinic,” says Mattsson. “Then the sample must be analysed by a competent lab that fulfils criteria to provide really robust and valid results for biomarkers.”

Such methods can also be difficult for patients. The procedure can cause a headache, which is benign and transient but nonetheless unpleasant. However, measuring biomarkers in cerebrospinal fluid can be extremely efficient. “With one lumbar puncture you could analyse a variety of biomarkers,” says Mattsson.

“I’ve been very interested in the early stages of the disease when patients have very mild symptoms or even the preclinical stage before the person has developed any symptoms at all. We think that the disease starts in the brain, years or even decades before you have any symptoms, with a slow build-up of protein aggregates.”

Currently, blood tests for diagnosing neurological diseases are confined to research as they have not yet been approved for clinical use. Nevertheless, Mattsson is optimistic about the future of their use within healthcare. “I must say that some of the recent publications and data that we and others have shown at conferences are very promising,” says Mattsson. “For example, a study that we have been working on, blood tests for beta-amyloid, were as accurate, or even more accurate, for the diagnosis and prediction of future cognitive decline than a clinical evaluation by a welltrained specialist.”

These developments are exciting but do need to be implemented mindfully. “You really need to determine if these biomarkers explain the current symptoms or you have detected a process that is lingering in the background and will not manifest itself until many years later,” Mattsson explains. “You need to make sure that you evaluate the entire picture before you explain the impairment with the biomarkers.”

The long lag time raises a number of ethical issues. “Something like beta-amyloid accumulation is so common with age that in fact many people will develop it but will not have time to experience symptoms from it because they will pass away from other causes before they would have time to develop cognitive impairment due to the amyloid pathology of Alzheimer’s disease,” says Mattsson. “Because of this – and because we cannot modify Alzheimer’s disease with any treatment – we do not recommend testing in those who are not impaired.”

What and when to test

This is a problem throughout medicine as increasingly sensitive tests are developed. “There is a lot of debate about this in oncology, for example, with screening for different types of cancer; to what degree are we detecting diseases that are or will become problems for a patient,” says Mattsson. “If we link the test to a treatment, that will have a cost and there may be side effects, so it is a difficult balance to maintain.”

“If you look back five or 10 years ago, it was rare to have biomarkers included. Now, we have the opposite situation, where it is extremely rare that you start a drug trial for Alzheimer’s disease without incorporating biomarker information, especially to ensure that you are including patients who have the condition.”

These issues can be navigated with more careful use of biomarkers. “What we are also seeing now is the development of biomarkers for the other hallmarks of Alzheimer’s disease: tau and neurodegeneration,” says Mattsson. “Potentially, these changes in the brain are much more closely correlated with the symptoms of the disease, so you don’t have the same problem of the long lag time between biomarker changes and clinical changes.”

This includes blood-based biomarkers, such as neurofilament light protein, which Mattsson and his colleagues have explored in their research and published in a recent paper in JAMA Neurology. The implications of these findings are hugely significant for diagnostics within primary healthcare. “In my dream scenario, we will have blood-based biomarkers for tau, amyloid and neurodegeneration available in clinical practice,” says Mattsson. “A clinician will be able to look at all of these together, from one blood test basically, and make a confident diagnosis.”

This might be a diagnosis of Alzheimer’s if all three biomarkers are different from what would be expected, or conducting further testing if only some of the biomarkers indicate possible impairment. “It is about using these biomarkers as a surrogate to looking inside the brain of your patients,” explains Mattsson. “Instead of guessing from the outside what is happening, we want to be able to provide these molecular tools to understand if certain pathologies are present and if they have led to neurodegeneration in the patient.”

These insights can also lead to accelerated development of treatments for neurological conditions, such as Alzheimer’s disease. “What we have seen over the past few years is that biomarkers are being incorporated into drug trials, so if you look back five or 10 years ago, it was rare to have biomarkers included,” explains Mattsson. “Now, we have the opposite situation, where it is extremely rare that you start a drug trial for Alzheimer’s disease without incorporating biomarker information, especially to ensure that you are including patients who have the condition.”

The biomarkers can be used to determine the effectiveness of treatments. “They act as surrogate outcome measures, to see at an objective level whether the drug engages the target that we want and whether this leads to the expected positive downstream effects, such as less degeneration,” says Mattsson.

Mattsson is keen to continue his work in this area, particularly focusing on the earliest stages of the disease. This is not as relevant from a clinical perspective because it is studying individuals before they have developed any symptoms, but has value nonetheless. “The goal of those studies is really to learn more about the mechanisms of Alzheimer’s disease in humans,” says Mattsson. “To achieve this we need to look at biomarkers in living humans and to see what changes happen first, and when and how they are linked to downstream changes in the brain.”

The research will also add to the understanding of what naturally happens in the brain over time when there is no pathology. “Our conceptions of normal ageing will also start to shift as we understand how common these pathologies are and how they interact with age to produce changes in cognition,” says Mattsson. This work is ongoing and is clearly one to watch. 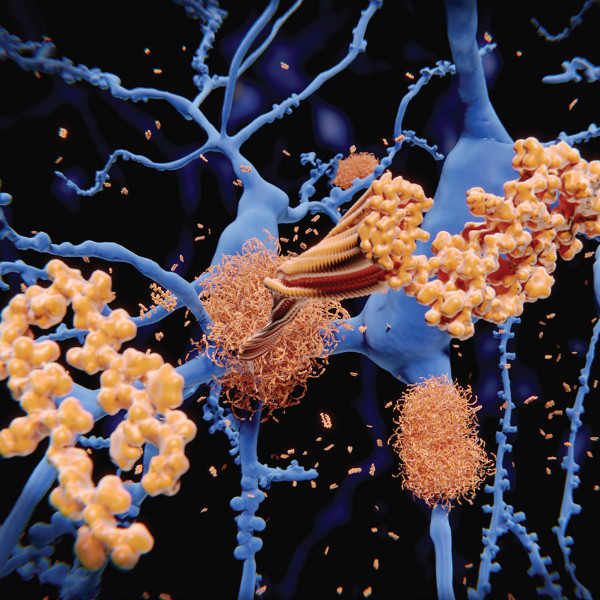 A 3D rendering of amyloid-beta peptide that accumulate to amyloid fibrils that build up dense amyloid plaques. 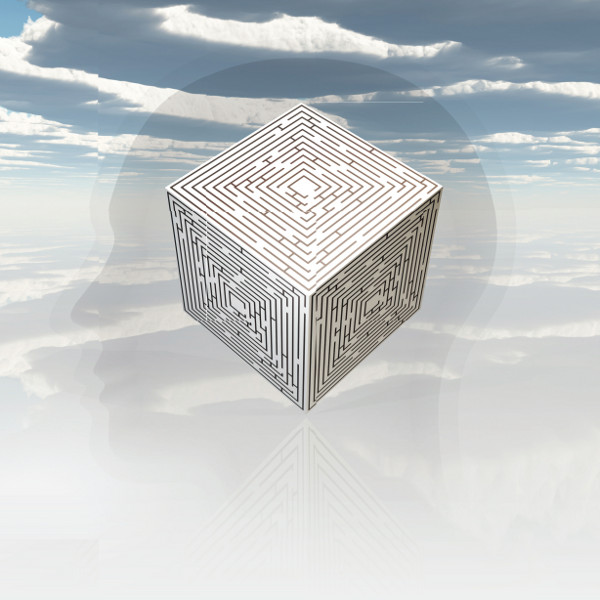