Painful realisation: diagnosis of the causes of pain

Identifying the root cause of pain in patients can often prove to be an arduous task for medical professionals. Chris Godfrey speaks to Stanford University radiologist Sandip Biswal, who recently published research into new imaging technology methods that could revolutionise diagnosis of the causes of pain.

The nature of pain has proved to be an elusive phenomenon among medical professionals. Due to its individualistic nature and a lack of any definitive mechanism for measurement, the diagnostic process is often characterised by a combination of self-testimony and verdict through elimination.

According to a study by the Institute of Medicine, the incremental cost of pain in the US alone stands at $560-635 billion annually, or $2,000 a citizen. More than 1.5 billion people worldwide suffer from chronic pain, and, in a survey conducted for the American Pain Foundation, more than half of respondents (51%) felt they had no control over it. Chronic pain is not just a physical malady; it has a tendency to wear sufferers down to the point of depression (77% claimed to be depressed in the same study) and can lead to insomnia, reduced energy levels and an inability to concentrate.

"Pain is a remarkable symptom for warning us that something is wrong with our body, but at the same time so many people suffer because of it," says Sandip Biswal, associate professor of radiology at Stanford University, California, US. "There's a real disadvantage to experiencing pain; it makes me wonder what the evolutionary benefits of it are, other than the obvious."

"Ultimately, we will be able to provide more objective diagnostics, and probably mitigate unnecessary surgeries or medical therapies."

The radiologist has always been fascinated by the ambiguous qualities of pain - why it devastates only some people, and the difficulties in diagnosing its root causes. Working alongside his colleagues, Biswal has recently presented findings from his research that have the potential to transform pain diagnosis. The study, published in the Journal of the American Chemical Society, aimed to produce a new imaging method that could be used to diagnose the source of pain. The research required the collaboration of medical professionals from various disciplines: a radiologist, a chemist, a radiochemist, a pain imager and a pain biologist all combined their expertise to create a new PET/MRI imaging method, which could potentially offer a more accurate way of identifying anatomical irregularities.

Diagnosing the cause of pain represents a significant portion of the work radiologists do. Even with advances in medical technology, this is not a simple feat, and for many patients the source is left undiagnosed.

"90% of our efforts involve figuring out why somebody's in pain," explains Biswal. "I noticed, though, that in scientific literature and in my own clinical practice, there exists a subset of patients for whom the origin was unidentified."

Identifying the root cause of pain can become as prolonged a procedure as the treatment for it, with physicians often having to rely on ambiguous self-testimonials from patients and protracted trial-and-error methods. The longer the diagnostic process, though, the harder accurately determining the source becomes. "After two months, and certainly by six months, if you still had pain, there would be no way I could accurately or with any confidence tell you why a person might be experiencing it," Biswal explains.

The population-based Framingham Knee Osteoarthritis study, published in Seminars in Arthritis & Rheumatism in 1990, examined the prevalence of radiographic and symptomatic knee osteoarthritis in elderly candidates and demonstrated the difficulties in diagnosing pain.

One finding suggested that, in candidates who were experiencing knee pain, there was a significant chance they had a meniscal tear. Despite this, meniscal tears were also prevalent in candidates who were not displaying any symptoms. "Even with a controlled population, there was a significant proportion of candidates with no knee pain, despite having mechanical damage in their knee," recalls Biswal. "This prompts the question: if you have knee pain, how do you know that a tear to the meniscus is the cause?"

The location of pain is not necessarily indicative of the cause. If a surgeon recognises a meniscal tear on an MRI scan, they are likely to suggest conducting an arthroscopic procedure to repair the damage. Such an experiment may not cure the pain though, rendering the surgery superfluous, time-consuming and costly. With millions of these particular procedures being unnecessarily conducted annually, a more accurate way to analyse pain could have positive implications across society.

One explanation for the biological cause of chronic pain lies in the presence of pain-sensing neurons and the way they react with increased exposure to certain ion channels. "In people with chronic pain, these neurons have up-regulated pain receptors and pain-related ion channels - a variety of other subcellular constituents that you can target," explains Biswal. "One of these is the voltage-gated ion sodium channel. When you have these in a high number, they spontaneously cause the nerve to fire, and that's one theory for the cause of chronic pain."

The development of a specific radioligand, a variety of radioactive tracer that applies to the voltage-gated sodium channel, has allowed Biswal and his team to explore the nature of chronic pain. In a recent study, published in the Journal of the American Chemical Society, Biswal and his team documented the effects through the use of MRI and PET scans of placing this radiotracer in animals experiencing neuropathic pain.

When the radioligand was injected into animal models with neuropathic pain, it arrived at the expected location, due to the increase in the number of ion sodium channels. It is believed that this build-up near pain-sensing neurons is the cause of chronic pain and the reason that even the most innocuous physical activities can result in recurrences.

The radioligand is manufactured by modifying a specific toxin produced by the red algae responsible for the 'red tide' phenomenon - a rapid accumulation of algae, predominantly in coastal areas, that results in the discolouration of surface water. The toxin created by the red algae has an extremely high affinity with voltage-gated sodium channels, and possesses the potential to cause numbness and paralysis to those exposed to it.

Justin Du Bois, a chemist at Stanford University and one of the study's co-authors, discovered how to synthesise, modify and radiolabel the toxin, while maintaining its binding affinity for the sodium channel.

"This radiolabelled radioligand can be injected into animals experiencing neuropathic pain," continues Biswal. "We are able to induce a nerve injury into their hind foot and measure the degree of pain in an animal. We then inject this radiotracer and perform PET and MRI scans."

The PET scan enables medical professionals to take a picture of where the radiotracer is - the modified toxin in this case - while the MRI shows where in the animal it is located, creating an anatomic image. When the images are fused together, it shows that the radiolabelled toxin is getting to the site of nerve injury, the culprit of the animal's pain.

"This research and the resulting test will hopefully be able determine where the inflamed or injured nerve is; you would be able to objectively identify where the pain is coming from," claims Biswal. "Ultimately, we will be able to provide more objective diagnostics, and probably mitigate unnecessary surgeries or medical therapies."

With enough funding and permission from the FDA, Biswal and his colleagues can begin the process of translating the study into a human model. "We have to increase investment to get this agent into early human trials, but we are hoping to do that within the next 12 months," Biswal says. "We are also making modifications to the tracer to improve its safety. The fantastic thing about this test is that the modified toxin is injected at such low a dosage the patient is not required to undergo therapy or expected to experience physiological effects."

"With a more accurate and cost-effective imaging test, you could save the healthcare industry a lot of money and a lot of headaches."

The ability to moderate unnecessary surgeries could see the test overtaking conventional diagnostic devices, according to Biswal. "What is currently done is extremely expensive," he says. "I've met so many patients who've been shuffled from clinic to clinic with professionals unable to find a reason for their pain. There's also a large subset of patients who are having operations, such as knee replacements, mistakenly thinking that they will treat their pain." Using the method devised by Biswal and his colleagues, patients will be able to have their eligibility for surgery more accurately screened.

"As a single unit, this test can be expensive, but not in comparison with the number of tests paying patients amass over time, which is quite exorbitant and often useless," says Biswal. "With a more accurate and cost-effective imaging test, you could save the healthcare industry a lot of money and a lot of headaches."

Successful human trials could lead to repercussions across the wider medical profession - pharmaceutical companies, governments and insurance providers all stand to gain from the study's realisation. Hazards associated with drug production will be reduced as the design process uses image testing to more comprehensively understand drug effects across the entire body, not just the target area.

Throughout the drug development process, value is typically placed solely on the effects to the target area; this new technology enables pharmaceutical companies to visualise the impact across the entire anatomy. This will facilitate a reduction in costs, as informed decisions about whether a potential drug is safe and effective enough to warrant production can be made earlier in the process.

If the sodium channel test is able to offer the objective analysis that Biswal hopes it can, it will also provide lawyers and insurance companies with a means of testing the legitimacy of a patient's claims. "You could use it as a form of truth serum," suggests Biswal. "If you have someone complaining of pain, you could actually objectify it. Now, we just take the patient's word in conjunction with some of the more limited tests that we currently use."

Many techniques used throughout the voltage-gated sodium channel study could also be applied to schools of medicine outside of radiology. There are plenty of other ion channels within the human anatomy that, with the development of ions similar to those used in the test, could be explored to a greater extent.

According to Biswal, pain is now the most common reason for seeking a physician in the US. Professionals across any medical discipline where symptoms of chronic pain are examined should have a vested interested in the outcome of the research.

The rising epidemic of chronic pain sufferers is showing no signs of abating, but if the human trials are as successful as Biswal believes they will be, then perhaps imaging technology can act as the anaesthetic that alleviates this growing pressure on the healthcare industry. 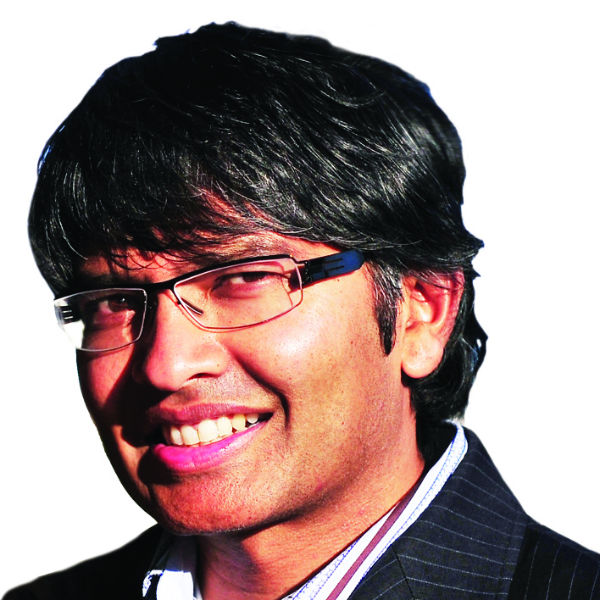 Sandip Biswal is an associate professor of radiology at Stanford University and a member of the Molecular Imaging Program at Stanford (MIPS). Specialising in the advanced imaging of musculoskeletal disorders, he is part of a multidisciplinary group developing targeted molecular methods to image and treat pain.
Post to: