On the paper trail

Testing for infectious diseases is often a drawnout process. Generally speaking, it involves an expensive laboratory test, which may have a relatively slow turnaround time and require sophisticated equipment.

Clearly this isn’t ideal for patients who want a quick diagnosis, or for the doctors seeking to treat them. To use just one example, a doctor may prescribe antibiotics to a patient with a suspected bacterial infection. If, further down the line, it transpires the infection was actually viral, that antibiotic prescription will have been useless or even harmful. It would be helpful to get a diagnosis on the spot.

Then there’s the fact that lab tests aren’t always feasible in low-resource settings. Particularly in developing countries, there is a need for cheap pointof- care testing that can diagnose infections quickly and help control their spread.

“In the developing world, the infrastructure is not in place, so there’s a general need to develop cheap and quick assays,” says Professor Maarten Merkx of the Department of Biomedical Engineering at the Eindhoven University of Technology (TU/e). “In the area of point-of-care diagnostic assays, there have obviously been a number of developments, the most well-known being glucose testing and pregnancy tests. Commercially, glucose testing is very successful, but the principle behind glucose sensing is not suitable for infectious diseases. The laminar flow immunoassay used in pregnancy tests can be used to detect antibodies, but is not very sensitive and ill-suited for quantitative measurements.”

As leader of the Protein Engineering research group at TU/e, Merkx is interested in developing new techniques for point-of-care diagnostics. His lab focuses predominantly on protein-based switches, some of which are designed for detecting antibodies.

Most recently, his team announced they had developed a radically new way of testing for infectious diseases. Together with a group led by Professor Daniel Citterio at Keio University in Japan, they have created a quick, cheap technology that can diagnose an infection within 20 minutes.

“We developed a sensor protein here in Eindhoven, and then together with our collaborators in Japan; we integrated the sensor protein into a paper-based device,” says Merkx. “All you need to do is apply a drop of blood, and then everything happens within the paper strip.”

The device is striking in its simplicity. After the blood has been applied, you wait 20 minutes before turning the paper over. Its underside will emit a blue-green light, which will be bluer or greener depending on how many antibodies are present in the blood.

“The device is basically like a traffic light that produces either green light or blue light,” says Merkx. “It produces green light in the absence of a specific antibody, but if the sensor protein recognises that antibody, it changes its structure and emits blue light.”

“Since our sensor always produces green and blue light, we don’t look at the intensity of the signal, or how much light is produced, but rather the ratio between those two colours,” says Merkx. “The ratio is a measure of the antibody concentration, meaning it’s much easier to measure quantitatively.”

As he explains, the sensor within the device is a ‘bioluminescence protein’ – a protein that can generate photons and essentially makes the device glow in the dark. It relies on an enzyme known as luciferase, which is also the enzyme responsible for lighting up fireflies.

“In the presence of a substrate molecule, the enzyme catalyses a chemical reaction and in the process generates light,” says Merkx. “In this case, the luciferase itself generates blue light.”

In the absence of an antibody, a second step takes place in which the energy of the blue light is transferred to a green fluorescent domain, and green light is produced. However, if there are antibodies in the blood, they will bind to the sensor protein and block that second step, meaning the light stays blue.

“Our technology is very generic, so it could be used to develop sensor proteins for any antibody and therefore, in principle, also any infectious disease.”

As for the paper strip itself, this consists of three layers. On the bottom layer, there are three different compartments, patterned out with wax.

“In each of these compartments we can introduce a sensor protein, so it can be three sensor proteins for three antibodies,” says Merkx. “Then on top of that there’s a second layer of paper – it’s just ordinary filter paper – that contains the substrate. This is the organic molecule that our sensor will oxidise to generate light.”

The top layer, he says, is a filter used to separate the blood. It retains the red and white blood cells, allowing the plasma (including any antibodies) to flow through into the layers below.

“The bottom has a plastic lamination, and on the top there’s a hole,” says Merkx. “So if you apply a drop of blood, the blood will be sucked into the paper. The blood cells will be retained because they cannot go through the first layer, but the rest of the plasma will go to the second layer where it dissolves the substrate molecules. Finally, it will end up in the bottom where the sensor proteins are.”

The bottom layer now contains a substrate, the bioluminescent sensor proteins, and the antibody (if present). After 10 to 20 minutes, you flip the device over and take a photo of the light that’s produced.

“What is important here is you don’t have to do any of the handling steps that you would typically do with other assays,” says Merkx. “A drop of blood is sufficient, as the exact amount of blood you apply does not affect the assay. All the other steps – the separation of the cells, the mixing of the substrate molecule – happen automatically in this paper.”

It’s important to mention that the technologies being applied here aren’t entirely new. Devices of this kind – microfluidic paper-based analytical devices – have received increasing attention in the past 10–15 years. However, Merkx’ prototype has several important advantages over its predecessors.

For starters, many of these earlier assays gave a simple yes/no answer – they were able to determine the presence of antibodies or other analytics, but not their concentration. They also required an external light source.

“What’s attractive about the combination we have here is that our sensor is based on bioluminescence, so the sensor itself produces photons and you don’t need to illuminate it,” says Merkx.

In their prototype, Merkx’s team successfully tested for three antibodies at the same time. Beginning with blood serum from a pig, and then with whole blood, they spiked the sample with antibodies against HIV, flu and dengue fever. The test worked well, in that the blueness or greenness of the light corresponded with the concentration of antibodies.

“In this proof of principle, we demonstrated that we’ve developed sensors that are specific for three different antibodies,” says Merkx. “Our technology is very generic, so it could be used to develop sensor proteins for any antibody and therefore, in principle, also any infectious disease.”

In order to do so, you would need information about what kind of antibodies are produced in response to an infection, along with a peptide sequence that can be used for antibody recognition.

“If you have that, you can generate a specific sensor,” says Merkx. “But there is another caveat, which is the heterogeneity in the kinds of antibodies the immune system will produce in different people in response to a specific infection. You probably need to develop a panel of sensors that target slightly different antibodies, so that you’re covered.”

A device of this nature would be invaluable within the developing world, particularly when it comes to detecting tropical diseases. You could take it into a community setting, and diagnose patients within 20 minutes. Currently, the researchers are focusing on making the device more stable and reliable, so that it’s suitable for use in these conditions.

“Ideally we’d like to have devices you can keep for months and they would still work, and so we make sure that all the components are stable,” says Merkx. “If you have a device that’s only stable where you store it frozen or in the fridge, that makes it less suitable for point-of-care diagnostics.”

The potential, however, does not end there. As Merkx explains, the technology might also be used to monitor the dosage of therapeutic antibodies that patients receive; for example, within oncology or inflammatory diseases. “Many of the drugs that are being developed today are not small molecule drugs but antibodies,” he says. “All patients basically get the same dose of these therapeutic antibodies even though it’s known that different patients respond differently to them. In some patients, they are cleared very quickly and in others they stick around for a longer time. It would be useful if there were a test to ensure everyone received the right dose.”

In fact, he thinks this application might be the first to be commercialised. While the device has many potential uses, it really comes down to finding a gap in the market – something for which either no equivalent technology exists, or for which current technologies are too expensive and aren’t being applied. Currently, his team is looking to create a start-up company, which will work on developing the technology outside the academic labs.

“I don’t think this technology will replace all the immunoassays that are being used in clinical chemistry laboratories,” says Merkx. “These laboratories are highly automated, and can do multiple tests all using the same technologies. So I think it’ll be most successful being used in applications where assays are not currently being done.”

Although he thinks it will take a number of years before the device is fully commercialised, his team are making real strides in that direction. They are working to create different sensor proteins for different antibodies, and ultimately want to measure other types of biomarkers too.

The next step will be to take real patient samples and compare the performance of the assay to the current gold standard (laboratory assays, for example). They are hoping the device will provide a similar level of accuracy to what’s out there already, helping pave the path towards commercialisation.

“These technologies are quite novel and different from classical immunoassays,” says Merkx. “We think they will be suitable for use in resourcelimited areas, or for monitoring therapeutic antibodies on a patient-specific basis – those are where the best chances are.” 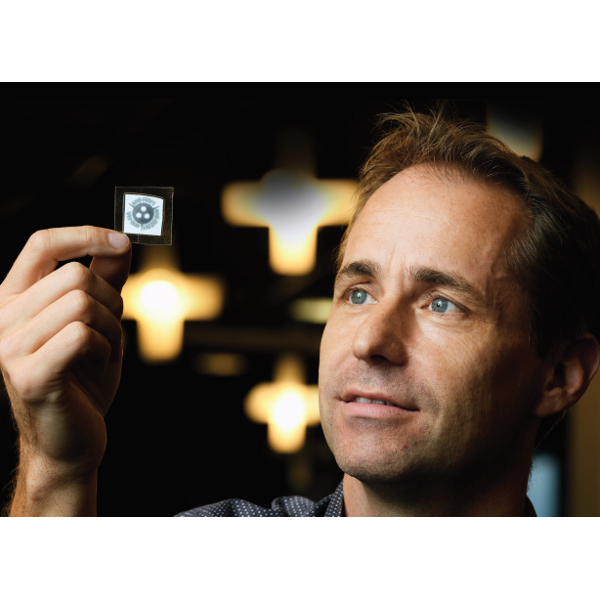 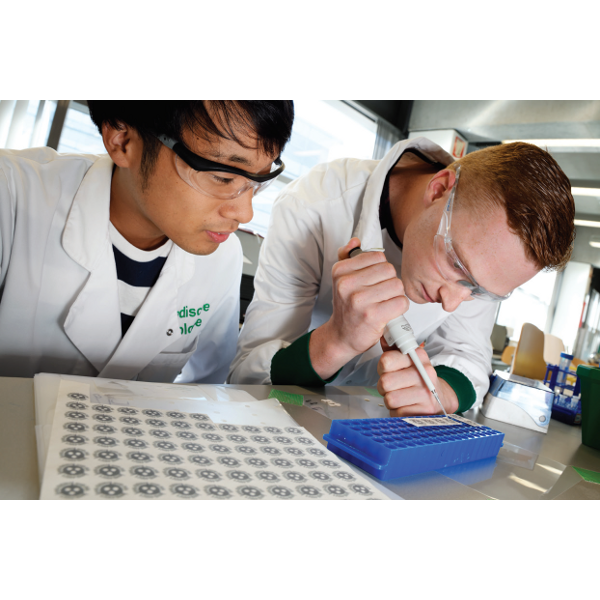 The rapid paper test gets under way.
Post to: