New attitudes and pioneering psychiatric hospital designs are overcoming mental health taboos in the Middle East. Eleanor Wilson gathers expert insight from a psychiatrist and architects about the region’s progress.

Historically, the Middle East has been a difficult place for mental health patients to find help. Sufferers faced enormous social pressure to go to a spiritual healer instead of a doctor or to keep quiet. This stigma has contributed to a severe lack of psychiatric education and services throughout the region. However, the rising population of expats has introduced new ideas. Governments now want dedicated psychiatric facilities that are not only built and staffed to comply with the latest research, but are also designed to chip away at taboos.

As recently as 2012, medical schools had scattered coverage of psychiatry, paying little attention to research, teaching students how to interview patients or following the natural course of disorders. Many patients also have psychosomatic symptoms and experience emotional distress as physical pain. Patients who seek medical attention find GPs who are time-pressured and have little training handling their cases. Visiting a large central hospital is an alternative, but this is hardly a discreet option. At the same time, refugees from areas of conflict must be treated for post-traumatic stress disorder, and low-paid foreigners who work in rough conditions require mental as well as legal help.

In 2013, when Qatar launched its National Mental Health Strategy, the Supreme Council of Health cited research that found one in five Qatari adults suffered from mental health problems.

“There still isn’t a lot of talk here about psychiatric problems, [but] there is more education, public awareness and conferences about them,” says Dr Ziad Kronfol, professor and clerkship director of psychiatry at Weill Cornell Medicine-Qatar. “It is still a taboo, like in many countries, but it is eroding slowly.”

The college, a branch of US-based Cornell University, has four professors of psychiatry. Kronfol and some colleagues are also consulting psychiatrists for Hamad Medical Corporation (HMC), which operates many of the country’s medical facilities and has announced its plan to adopt a decentralised model that endorses community mental health centres.

According to Kronfol, this approach is a ‘mixed bag’ due to the lack of trained mental health professionals in the country. “There are some positive things that are happening with community psychiatry: the patients are seen in familiar places, they don’t have to go far and it’s cost-effective,” he explains. “But sometimes it’s ‘one size fits all’, so you may not be able to take care of the different ramifications of an illness.”

Before moving to Qatar, Kronfol worked in Michigan for 20 years, witnessing the birth of dedicated clinics and research centres for depression. The experience informed his vision of the ideal psychiatric hospital.

“It has to be the antithesis of what depression is; it’s got to be a place that is spacious and very luminous, with gardens and places for people to relax,” he says. However, he notes that even in the US, there are not enough psychiatrists.

“If this is not happening in the US, or anywhere in the Western world, it’s unlikely that it’s going to happen here anytime soon. Until then, providing healthcare in a community health centre is not a bad idea, but we need to make sure that it’s done in the proper way,” he says.

Not all services are moving to the suburbs: HMC is planning for a new psychiatric complex at Al Wakra Hospital that will focus on cultural sensitivity and bringing an inclusive design to the centre of the city, which is just south of the capital, Doha. Meanwhile, in Dubai, the federally run Al Amal Hospital for Mental Health moved to a brand-new facility in 2017, which houses 276 beds, outpatient facilities, and research and education spaces.

The complex was designed by kmd architects in the US, with Jim Diaz, senior healthcare principal emeritus and co-owner, leading the project alongside daughter Lari Diaz, a principal and healthcare director.

The father-daughter team say that the UAE Government was keen to build a hospital that aligned with the latest research. As well as treating the public, Al Amal also receives patients who are transferred by the police and courts. In addition, it explicitly serves Emirati nationals rather than expats.

This ‘house’ is geared towards a long stay so patients can learn to modify their own behaviour, rather than relying on medication.

“From the top down, the whole country was trying to come up with a new paradigm for mental health,” says Jim Diaz. “They set up a blue ribbon committee comprising the most important psychiatrists, psychologists and others in the country’s mental health sector. They did an extensive study that included trips around the world to visit facilities.”

The Diaz duo used the Souk at Dubai Mall as their basis for incorporating elements of Emirati architecture. They also drew inspiration from their native country.

“Being Spanish, we wanted to make this building like the Alhambra, which was the high point of Islamic architecture in Spain,” explains Jim Diaz.

The result is a hospital that combines new attitudes to mental health with local culture, bearing a striking resemblance to Kronfol’s idea. The inpatient wards are designed around shaded courtyards and lush gardens, with plenty of natural light and privacy screens that echo traditional designs. Instead of ultra-modern glass, the exterior is finished with wood and stone that fits into the neighbourhood. Its wards are also separated by gender, acuity and age, with additional wards for VIPs and forensic patients, who are brought in as part of criminal cases. And for the first time, there is a substance abuse detox unit.

“The hospital’s other facility had fewer units for the patients that mixed many different types of patients together. A goal for this facility was to make it large enough so it would have separate bed units for different types of patients,” states Lari Diaz, who emphasises that Al Amal’s design meets specific needs, such as separating volatile and geriatric patients.

In addition, social estrangement is minimised by emphasising links with the outside world, and encouraging patients to mingle and room in two-bed units.

“We have a huge outpatient component because the whole idea was to put people back into the community,” says Jim Diaz.

The out and inpatient sections are separated by the ‘therapeutic mall’ – a corridor housing various treatment rooms for both types of patients. The public-facing buildings contain a gym, occupational therapy and rehabilitation facilities, as well as a pharmacy. These play an important role for Al Amal’s patients and the neighbourhood, as the hospital is a government-run primary care clinic.

“People who receive healthcare through the government will come to this facility, thereby normalising that regular people come to the mental health hospital – it’s not like a penal institution,” Jim Diaz explains.

Next to security, family was another core factor that had to be accounted for.

The paediatric inpatient ward features bedrooms that enable parents to stay with their children, but adults need loved ones too. Patients may arrive feeling ashamed, scared or lonely; it would be counterproductive to cut them off from family as part of their treatment.

“A big factor in the improvement of patients is family involvement,” affirms Lari Diaz. “For this particular project, organisers were already thinking along those lines and created a majlis room on the edge of the unit, with pillows and comfortable seating for family members.”

A majlis translates as ‘a private place to entertain guests’. This concept turns the patient into a host who is receiving visitors, and returns dignity to the mentally ill. This is far removed from the usual Western method, which prioritises tight security over social niceties.

“The facilities we’re working on right now are more secure in the US; those types of rooms tend to just be a table and a couple of chairs,” Lari Diaz states, adding, “So Al Amal was more progressive.”

As patients begin to recover, they move from high-security, single-bed units to less restrictive wards, where they can live with a roommate and gain access to public areas for treatment. However, there is another crisis for some patients who are feeling well enough to leave – that they may have nowhere to go. Al Amal has a ‘halfway house’ for patients who cannot return home, which comprises a cluster of residential units that are separated from the inpatient wards. These enable them to start transitioning back into the community.

This ‘house’ is geared towards a long stay so patients can learn to modify their own behaviour, rather than relying on medication. It is easy to treat mental health as a medical issue, thus defaulting to drug-based solutions, particularly in a region where mental disorders are often psychosomatic and patients are prone to over-medicating – especially with antibiotics. To introduce behavioural therapy as a viable option will require what Kronfol describes as a ‘paradigm shift’. He says that the change is already beginning at a grassroots level, and is being fuelled by the connectivity of social media.

“One patient brought up the idea of developing [a] self-help group,” Kronfol reveals. “Under the supervision of a mental health professional, he would get together with some people who suffer from a similar disorder and talk about their problems.” New schemes like this, together with forward-thinking facilities and governance, will enable patients in the Middle East to transition towards having a better chance at leading productive lives.

Progress and change are often associated with tearing down what came before, sweeping away the old beliefs for an updated scientific outlook. But progress can also mean blending the past with the future. There is room alongside tradition for a new understanding of the connection between brain chemistry and behaviour. With an increase in education, there is no need for shame. 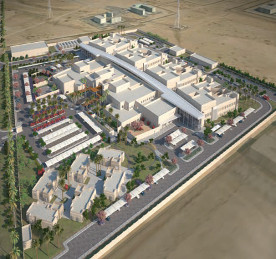 The Middle East is pioneering taboo-breaking designs for psychiatric hospitals.
Post to: