Gadolinium-based contrast agents, widely used in MRI scans, are generally thought to be safe for patients with normal kidney function. Unfortunately, a new study suggests that trace amounts remain even in patients with healthy kidneys, and may be linked to brain abnormalities. Medical Imaging Technology asks lead researcher Dr Tomonori Kanda about the significance of his findings and how safety recommendations may be affected.

Gadolinium-based contrast media has long been an area of controversy. Mention the term in radiology circles and discussion will rapidly turn to the association with nephrogenic systemic fibrosis (NSF). This association is now well established; what to do about it remains a question in point.

Unfortunately, NSF is not the only issue making the news. In December 2013, a study in Radiology drew a link between gadolinium-based contrast agents and brain abnormalities, suggesting toxic gadolinium ions may stay in the patient's brain long after administration. If this idea proves correct, it may be time to re-evaluate current wisdom regarding safety protocols. And, while more research is needed, the study lays down another piece in what is proving to be a complicated puzzle.

The history of gadolinium-based contrast agents is worth recapping. First approved in 1988, gadolinium contrast agents are currently used in around 25-30% of MRI scans every year. There are several varieties but all are administered intravenously and used to heighten contrast between the diseased tissue and its surroundings.

In terms of the risks to patients, gadolinium-based chelates have generally fared well. They are deemed safer, on the whole, than the iodinated contrast media used in CT scans and X-rays, which carry a risk of anaphylaxis and kidney damage. It is estimated that some 200 million doses have been administered in the US, mostly with no discernable ill effects.

In 2006, however, it became apparent that something was amiss. Dr Thomas Grobner, a nephrologist from Austria, noticed a correlation between gadolinium-enhanced MRI and the development of a rare but serious condition: NSF.

First emerging in 1997, NSF is characterised by the fibrosis of skin, joints and internal organs. It can prove extremely debilitating, often leading to wheelchair dependency, and in its worst instances can be fatal. Right from the outset, a certain sufferer profile was apparent: all had chronic kidney disease, and most had received kidney transplants.

Not till Grobner et al, however, did anyone think to draw a link with MR scans. According to his report, five of his patients had developed NSF within weeks of receiving gadolinium contrast injections, and, rather than passing through their bodies as expected, the substance could be identified in their skin tissue. These claims, which caused significant disquiet in the medical community, prompted an FDA investigation.

Since then, evidence has continued to mount, and radiology departments have put firm precautions in place. It is now recommended that, for patients with kidney problems, gadolinium-based contrast agents should be used judiciously, if at all. Since these guidelines were applied, the incidence of the disease has fallen from 36.5/100,000 to 4/100,000 patients.

For those with normal renal function, however, the recommendations haven't changed. Up till now, there has been little to suggest gadolinium might linger in their bodies too.

The new Radiology paper has a different message. Published online, it involved 35 patients who had undergone brain MR imaging, 19 of whom had received at least six gadolinium-enhanced examinations. Following another T1-weighted MRI (this time unenhanced), clear differences in their brains were observed.

The research team, based in Japan, noted a strong correlation between the number of exams and areas of high intensity in their brain. The areas in question were the dentate nucleus (DN) and globus pallidus (GP). Hyperintensity in these regions is associated with multiple sclerosis and hepatic dysfunction respectively, although the exact clinical implications are unclear.

"Abnormal signal intensity in the dentate nucleus and globus pallidus are associated with past gadolinium-based contrast agent exposure," confirms lead author Dr Tomonori Kanda, from Teikyo University School of Medicine in Tokyo and Hyogo Cancer Centre in Akashi. "MRI imaging had not detected this before, but our data suggest the possibility of deposition in the human body."

This suggestion flies in the face of what is currently believed. In patients with normal renal function, gadolinium elimination is thought to be rapid and complete: toxic gadolinium ions are chemically bonded with non-metal ions (chelation) and quickly removed from the body. Pharmacokinetic studies suggest that over 90% of the substance is excreted in the first 12 hours.

When a patient has kidney disease, this process is disrupted. As the substance is eliminated almost exclusively via the kidneys, poor renal function increases the clearance rate and the half-life of the compound in the blood. In the worst-case scenario, it can lead to gadolinium retention within tissues, and, ultimately, NSF.

This is not what is occurring in Kanda's study. If his work does show toxic gadolinium deposition in the brain, the mechanism would be independent of renal function. Rather, it could be that trace amounts remain, even in patients with healthy kidneys, and gradually
start to accrue if the patient receives multiple injections.

No room for complacency

Of course, we have to be careful not to extrapolate too far. This particular study is just a starting point: it didn't evaluate damage to the human body, and it didn't assert that gadolinium was responsible for the areas of hyperintensity. And, while it did establish a relationship between multiple injections and brain abnormalities, the nature of this relationship is yet to be determined.

The first of these three speaks for itself. With regard to the second, it should be noted that there are two types of gadolinium-based contrast media - macrocyclic and linear - with distinct chemical configurations. The patients in this study received the linear type only. Macrocyclic agents may prove safer, or at least give different results.

The third angle is the most interesting and the most complex. If we look at the patients who are receiving the multiple injections - that is, the ones who require frequent brain scans - they're also likely to be the ones who suffer from the most severe diseases. This means that even if gadolinium does accumulate, any symptoms may be obscured and attributed to the disease in question.

It's also hard to determine whether the areas of brain hyperintensity are due to gadolinium or to the patient's underlying condition. Untangling what causes what will take a significant amount of research.

With so much yet to be explored, it is safe to assume that FDA recommendations won't be changing any time soon. But equally, there's no room for complacency. If gadolinium is not cleared entirely, it may well build up in organs over time. And, while such deposition might prove asymptomatic and ultimately benign, there is also the chance that it might not.

For now, he feels radiologists should keep an eye out for developments in this field, as they may be required to implement new rules in future. "If toxic gadolinium accumulation does occur, a limitation in the number of gadolinium injections may be recommended," he says. 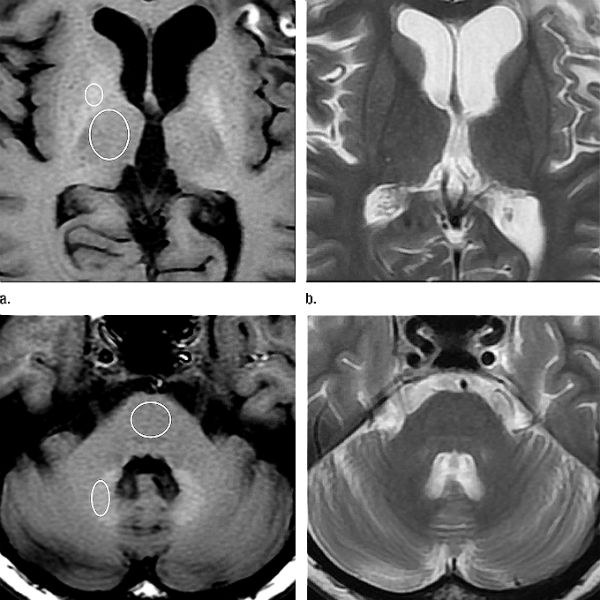 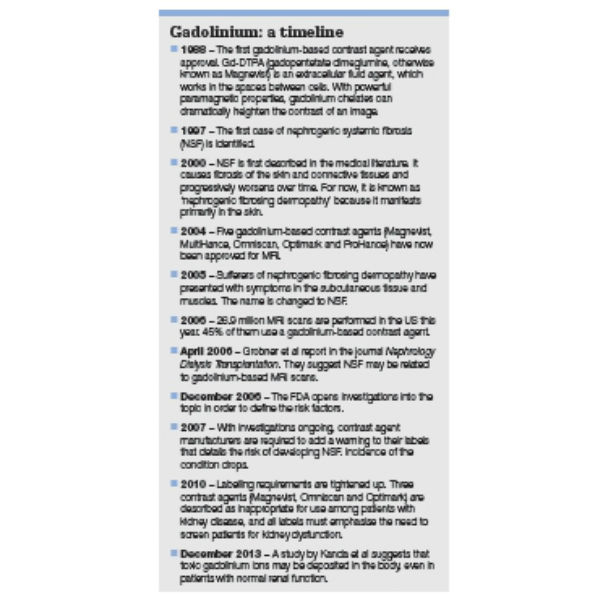 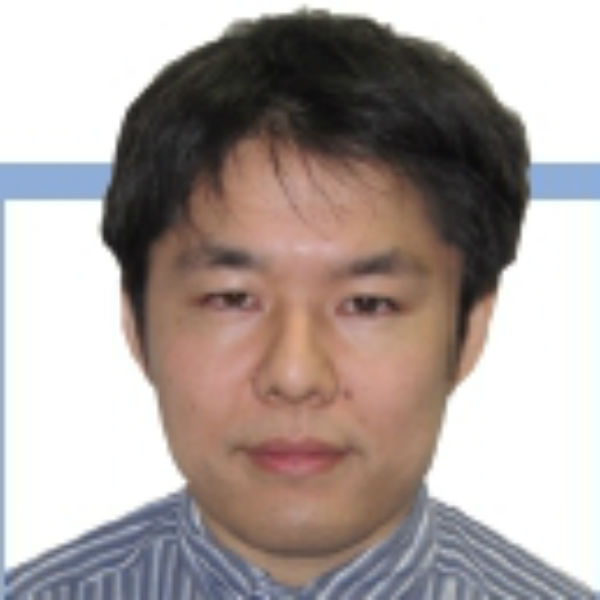 Dr Tomonori Kanda is from the Department of Diagnostic Radiology at Hyogo Cancer Centre in Akashi, Japan. He is lead author of the study ‘High signal intensity in the dentate nucleus and globus pallidus on unenhanced T1-weighted MR images’, published in Radiology.
Post to: