Understanding the beliefs of healthcare professionals regarding glove use and associated hand hygiene is imperative in order to improve practices. However, research in this area is limited. Louise Thomas explores the research on the perceptions and behaviours of healthcare professionals as well as the most effective strategies to improve adherence.

Healthcare-associated infections are a considerable social and economic burden for patients, relatives and the health services, lengthening duration of hospital stay and increasing resistance to antimicrobial agents. Hands are acknowledged as a major vehicle for the transmission of infection between patients and have been responsible for outbreaks of infection reported in the literature.

Adherence to hand hygiene practices is strongly recommended as the primary infection prevention measure. The risk of transmission of infection to patients can be minimised by hand decontamination immediately prior to contact with a patient or a susceptible site such as a wound or invasive device. The World Health Organisation (WHO) developed a framework for infection prevention and control education on hand hygiene in 2009, which has since been adopted worldwide. Interestingly, WHO guidance does not explicitly integrate the use of gloves within its framework. However, the incorrect use of gloves, such as failure to change them between patients or between different sites on the same patient, combined with inadequate hand hygiene after use, can result in the transmission of micro-organisms.

The introduction of universal precautions, as well as the concept of body substance isolation, was an important development as this triggered the introduction of latex and vinyl gloves into routine clinical activity. National guidelines subsequently advised the use of gloves as part of standard infection-control procedures to prevent exposure to blood and bodily fluids, based on a risk assessment. However, compliance rates among healthcare professionals are relatively low, in the range of 40–60%, particularly at entry to patient rooms or before patient contact. Hand hygiene is also subject to a Hawthorne effect, where behaviour is modified under observation.

The factors of non-compliance

A 2015 paper, published in the American Journal of Infection Control, identified a number of factors associated with non-compliance, which were categorised as being motivational factors or related to perceptions of the work environment.

With regard to the former, social influences, acuity of patient care, self-protection and use of cues were all significant. Healthcare worker compliance with hand hygiene guidelines was influenced by the behaviours of others from a peer or organisational perspective. Junior doctors and medical students were mainly affected by the actions of senior medical staff. Similarly, student nurses were influenced by the practices of qualified staff. This could increase and decrease adherence, depending on what was modelled.

Patient care activities vary in acuity, and this has been linked to the judgements made by healthcare professionals with regard to hand hygiene. For example, in emergency situations, staff acknowledged that they did not stop to wash their hands.

Although self-protection has been identified as a key driver of hand hygiene behaviour, there is significant variation among individuals in their perception of risk. In some cases this extends to concern about the impact on family members, which can serve to enhance motivation for adherence.

The use of cues has also been cited as being important. This includes carrying out practices before and after examinations, using visual prompts, such as alcohol and hand gels. These have been shown to consistently boost adherence to hand hygiene practices, but to varying degrees. The most effective types of cues thus require further testing.

In terms of the workplace environment, resources, knowledge, information and organisational culture were all identified as being influential. The time required to complete a task and the facilities available to healthcare workers impacted their compliance, with workload and staff shortages being particularly problematic. Understaffing was linked with lower compliance and an associated increase in healthcareassociated infections.

Readily available hand hygiene products also supported compliance. Conversely, a lack of these negatively impacted adherence as staff admitted they did not often seek out alternatives. When healthcare workers were provided with electronic hand hygiene monitors, these were viewed positively, which suggests that this is a useful strategy to boost engagement in hygiene practices. The adequacy of supplies and time to perform hand hygiene are clearly both essential to compliance. Convenient access at the point of care is therefore highly recommended.

The knowledge of healthcare professionals about when to carry out hand hygiene practices was unsurprisingly associated with subsequent adherence. Some healthcare workers were found to be unaware of the importance of the behaviour and the use of gloves was often perceived as a proxy measure. In addition, the provision of information was well received by staff, highlighting the importance of education in strategies to boost compliance and reduce infection risk.

Organisational culture was highlighted as being significant across all disciplines. Cultural factors, such as a lack of openness and a fear of negative consequences, were also apparent. The value the organisation placed on hand hygiene was also cited as important by healthcare professionals.

Although hospital culture is difficult to measure and the instruments used are relatively unreliable, it is a topic frequently discussed because it is significantly associated with infection control. When there was a supportive culture, compliance with hand hygiene guidelines was improved. Where there was a lack of organisational commitment, healthcare workers felt disempowered to correct poor adherence.

Interestingly, the literature on glove use specifically is more limited, but is growing. Two broad categories of influences have been identified – emotions and socialisation. Emotions include the positive feelings of healthcare professionals associated with protecting themselves, patients and their family members. Disgust was also significant, among those healthcare professionals who felt that some patients were unclean and, as a result, were more likely to use gloves when caring for them.

In terms of socialisation, perceptions of professional, organisational and patient expectations influenced practices. When asked about what they used gloves for, healthcare professionals highlighted their professional duty to protect patients from harm and described appropriate clinical indications such as anticipating contact with blood or bodily fluids. Observing other staff members using gloves was also a key driver.

Healthcare professionals also indicated that features of the clinical setting, especially the desire to save time and work efficiently, also influenced their decisions about glove use. However, some suggested that changing gloves wasted time.

Organisational dimensions of socialisation included issues relating to rules formalised in hospital policy, as well as unwritten rules. However, these were not always consistent. For example, some healthcare professionals indicated that wearing gloves was part of the hospital law, but that this conflicted with infection control policy.

Being challenged about glove use was also a feature of organisational socialisation. These tended to be directed at enforcing glove use, although there were examples where this was related to glove removal.

The decisions of healthcare professionals were also based on perceived expectations of patients that glove use would indicate more professionality and respect. Although most staff felt that patients would want them to wear gloves, some felt that it made their interaction with them too clinical.

Bring it all together

Although the literature on hand hygiene and glove use highlights some potential overlap in the influences of the two practices, research examining both together is limited. Interestingly, only a small amount of research has explored beliefs about these practices. Understanding the perceptions, beliefs and attitudes of the healthcare professionals is imperative in order to improve practice, thereby maximising patient safety.

A 2019 study, led by Jure Baloh from the Carver College of Medicine, University of Iowa, explored this in three academic hospitals in the US. Researchers conducted observations and interviews over a sixmonth period, and found that average compliance rates were around 70%. This was considerably lower than the rate of almost 90% that was reported to hospital prevention programmes over the same time period.

Surprisingly, the discrepancy between the two figures decreased over the course of the study, which researchers hypothesised was due to staff becoming aware of being observed and changing their behaviour accordingly, which characterises the Hawthorne effect. These results highlight the importance of re-evaluating how adherence to hand hygiene practices is measured.

In terms of reasons for using gloves, healthcare professionals indicated that this was mainly related to their own protection and, secondarily, for patient safety. In terms of hand hygiene more generally, patient safety was regarded as being of greatest importance, particularly in preventing cross-contamination. Some raised doubts about the need for hand cleaning before applying gloves, although it was unclear whether this was related to their own or the patient’s protection. Habits were also cited as a key driver, which required no conscious effort to maintain.

A number of barriers were also described by healthcare professionals. This included observing their colleagues not adhering to hand hygiene guidance. Workload was another influential factor, with non-compliance reported when this was at a high level in general or when they were particularly busy. In such instances, some hand hygiene practices were omitted and only gloves were used. This was not always cited as being conscious, healthcare staff said that they would sometimes forget because of being preoccupied with patient care tasks.

Specific activities were associated with lower adherence. For example, if staff were making a short visit to a patient’s room or if they did not anticipate they would be making direct contact with them. Certain tasks also served as a barrier, such as carrying a tray of food or if they started talking to the patient before they had undertaken hand hygiene practices.

The context, physical and cultural, also played a key role. Sanitisers were sometimes unavailable due to being empty, hard to find or covered. However, the presence of these products outside a patient’s room could prompt healthcare professionals to use these before placing gloves on. In addition, it was most helpful if gloves were inside the room as otherwise staff would sometimes use these in place of other hygiene practices. Role models could serve to promote or decrease adherence, and individual level factors were influential as several hospital staff members did not perceive hand hygiene as being important if they were wearing gloves. Some also experienced skin issues from engaging in these practices.

It is clear that a comprehensive approach to infection control involves addressing glove use and sanitisation behaviours in healthcare professionals. Although education about the importance of the issue is required, work targeting beliefs and habits is another key strategy to ensure that adherence is optimised. Furthermore, new approaches to measuring compliance need to be explored to ensure that an accurate picture of staff behaviour is gathered. 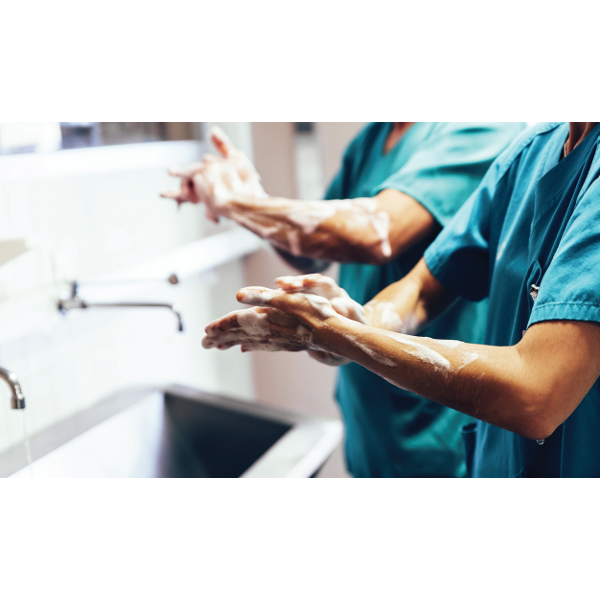 Failing to adhere to proper hand cleaning was a common issue when workload was at a high level, and often only gloves were used. 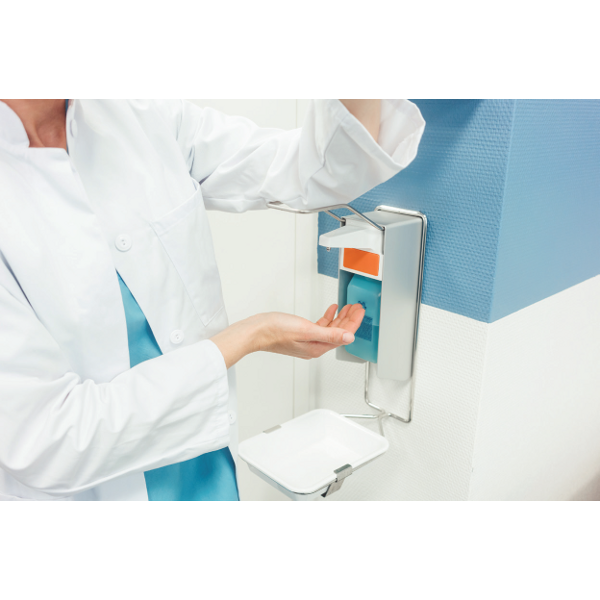 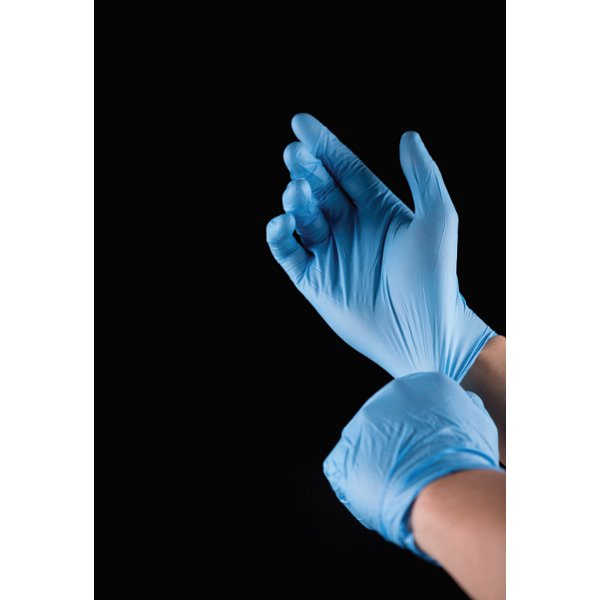