Hearts and minds: the link between hypertension and Alzheimer's disease

A recent study, featured in the journal Neurology, broke new ground in Alzheimer’s research. For the first time, it used PET scans to show that amyloid plaque build-up in the brain is related to arterial stiffness. But how exactly can hypertension influence the onset of dementia, and what are the implications for sufferers? Abi Millar talks to the study’s author, Dr Timothy Hughes, about the links between the heart and the brain.

It has been known for some time that hypertension is associated with Alzheimer's disease.

While the two may seem to have little in common, a wealth of research has borne out the link: those who suffer from high blood pressure run a higher risk of dementia later in life.

This conclusion does not stem exclusively from observational studies. Autopsies too have uncovered a connection between heart and brain, revealing that older adults with hypertension demonstrate more Alzheimer's pathology. Only recently, however, has it become possible to assess the situation in living patients and, better still, explore the precise nature of the link.

In October 2013, a team of researchers at the Wake Forest School of Medicine and the University of Pittsburgh announced the most significant set of findings to date. As they detailed in the journal Neurology, they had performed brain PET and MRI scans on 91 elderly individuals (aged 83-96), most of whom were cognitively healthy and none of whom suffered from dementia.

Even at this presymptomatic stage, around half showed a build-up of plaques in their brain tissue. These amyloid plaques and tangles are a hallmark of Alzheimer's disease, although it is not known exactly what role they play in the course of normal aging. What surprised the researchers was that patients with hardened arteries were more likely to have this build-up.

"Our study was the first to show that arterial stiffness is related to amyloid deposition in the brain," confirms Dr Timothy Hughes, a postdoctoral scholar at the University of Pittsburgh and lead author of the study.

"Controlling midlife hypertension could slam the brakes on up to 27% of cases of dementia."

His work comes at an exciting time for Alzheimer's research. It appeared just weeks before a major genetic study, which implicated 11 new genes in the condition. And it came hot on the heels of a landmark discovery in which researchers successfully used a chemical to halt the process of brain degeneration. But, while possible cures may steal the headlines, studies such as Hughes' shed an important light on prevention.

According to previous work by his team, controlling midlife hypertension could slam the brakes on up to 27% of cases of dementia. More recently, two separate studies underlined the role of the cardiovascular system in Alzheimer's pathogenesis.

"Those studies showed that blood pressure was associated with amyloid deposition in the brain," explains Hughes. "The problem is that blood pressure tends to drop as people get older and closer to death, so it's not a very accurate risk factor late in life. Both studies suggested it's actually arterial stiffness that is the main factor at play, and we were happy to see that because we were actually working on that project."

For Hughes' team, arterial stiffness represented an obvious line of enquiry. Unlike elevated blood pressure, it increases with age and is largely unaffected by the use of antihypertensive medications. What is more, it can be easily measured with pulse wave velocity (PWV), the current gold standard for determining cardiovascular prognosis.

The team assessed PWV in the central and peripheral arteries, alongside a systemic measure of both. Next, the subjects underwent PET imaging using Pittsburgh compound B (PiB), a well-known marker of amyloid plaques in the human brain. Forty-four out of the 91 tested positive for these plaques, with the likelihood strongly influenced by high pulse wave velocity.

Hughes' finding, a breakthrough in the field, would have been interesting enough in itself. But his team wanted to find out more about the mechanism responsible: did arterial stiffness cause these amyloid build-ups, or was something more at play?

The white matter disease in question (also known as white matter hyperintensity) is a type of neural abnormality, characterised by damage to the brain's signalling system. It affects the material found between the neurons and the spinal cord, and is linked to hypertension and Alzheimer's disease. Unfortunately, its link with amyloid plaques is rather harder to determine.

"One thing is clear: arterial function is indelibly related to Alzheimer's."

"White matter damage is a sign of vascular damage in the brain, and it's often used as a surrogate measure for that," says Hughes. "We incorporated MRI scans into the study to look at its co-occurrence with amyloid."

Perhaps unsurprisingly, the MRI scans revealed that high pulse wave velocity was associated with white matter damage. But it demonstrated something subtler too. While amyloid deposition was related to high systemic measures of arterial stiffness (central arterial stiffness being less important), this was not the case for white matter disease, which tended to coincide with central measures.

While the highest levels of arterial stiffness were associated with both white matter disease and amyloid deposition, the two appear to function independently. "This is what we're getting at with the double-hit hypothesis, which has been proposed by many other studies," he says. "At least in this cohort, the white matter disease was not strongly related to the amount of amyloid they had."

The role of drainage

That said, this may not be the whole story. There may well be interactions between the vascular and amyloid processes, a theory given credence by another recent study in the field.

"I'm thinking of a paper by JJ Illif, which suggests that amyloid is cleared from the brain via the cerebral spinal fluid," says Hughes. "It's quite possible that vascular damage due to stiffness or hypertension disrupts that drainage, and when drainage is disrupted, amyloid clearance is reduced and more of it builds up in the brain. There's a lot of work looking at amyloid clearance via that mechanism now."

Although further research is necessary, it seems probable that this clearance mechanism is essential to the health of the brain. While the signature Alzheimer's plaques were once blamed on amyloid overproduction, the real culprit could be a malfunctioning vascular drainage system. If confirmed, this would give backing to the link between Alzheimer's and heart health.

Hughes' own results are still preliminary and can only take us so far. As he explains, one of their key limitations is the PiB-PET scan itself - the resolution isn't particularly high, and it's impossible to work out exactly where the amyloid is located.

"Currently, the best ways to reduce arterial stiffness are to control one's fasting enzyme levels and exercise more – the health messages we have been hearing since time immemorial."

"This type of imaging can't separate out vascular amyloid deposition from deposition in the tissue," he says. "We don't know whether it's in the vessel wall, around the vessel wall in that drainage pathway, or in the brain tissue itself. I'm hoping there will eventually be other ligands available that will allow us to see where it's depositing."

As with any good scientific study, his paper may be said to raise as many questions as it answers. He believes the next step could be to test a younger cohort, aged 50-65. As amyloid can take several decades to accumulate in the brain, it would be useful to find out whether younger hypertensives develop these plaques before their
non-hypertensive peers.

For the time being, though, one thing is clear: arterial function is indelibly related to Alzheimer's. Is the takeaway message here 'lower your risk of dementia by reducing blood pressure'?

"I think it's an even bigger picture than that," remarks Hughes. "We had a colossal failure of some amyloid therapy trials where we tried to remove amyloid from the brain, and I think the Alzheimer's community is coming around to the fact that, once the amyloid is deposited in the brain, it may be too late to intervene. What we're trying to do is find risk factors that are modifiable.

"But the interesting thing is that, in our study, we adjusted for the use of antihypertensive medication, and found it made no difference. We think the reason is that the current treatments do a great job at lowering blood pressure, but they don't do much to reduce the amount of stiffness that has accumulated in the vessels. So maybe future therapeutic targets will look at arterial stiffness as their outcome, as opposed to just blood pressure."

Despite the sophistication of the ongoing research, it seems that the simplest areas may be among the most important. Currently, the best ways to reduce arterial stiffness are to control one's fasting enzyme levels and exercise more - the health messages we have been hearing since time immemorial. Studies like Hughes's provide yet another incentive to adjust these lifestyle factors.

"We're coming round to that old adage that cardiometabolic health is very important," says Hughes, "and coming up with a new axiom: what is good for the vasculature is also good for the brain." 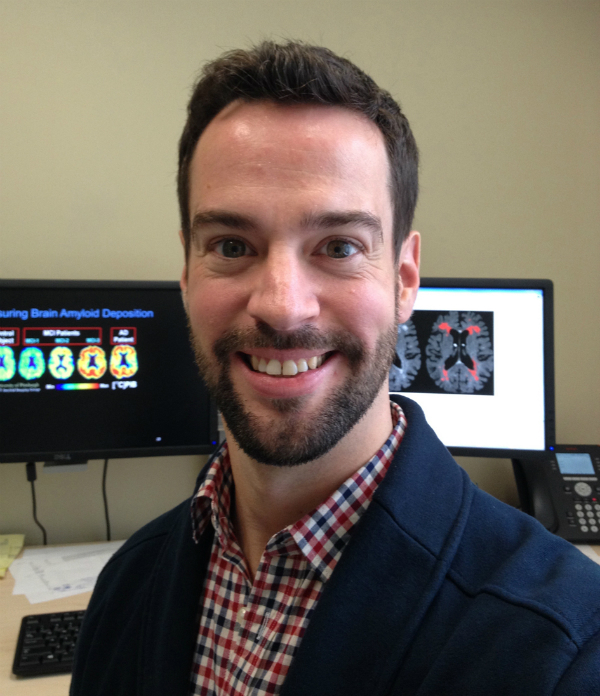 Dr Timothy Hughes trained as a neuroepidemiologist during his doctoral and postdoctoral fellowships at the University of Pittsburgh.
Post to: