Get smart – advances in dressing technology

A group of researchers from Ireland and the Netherlands have developed a new ‘smart dressing’ that they claim will revolutionise the future of wound care management. How does it work and what are the benefits for clinicians and patients? Practical Patient Care speaks to the team behind the project.

To a patient, getting their wound dressed may not seem like a particularly expensive component of healthcare, but according to a recent study in the Nursing Times, chronic wound management accounts for up to 3% of all health service expenditure in the UK, with a similar picture in the US. A report by the National Institute of General Medical Sciences in 2010 found that chronic wound care costs the US $20–25 billion every year.

Part of the problem is our ageing population. “While people are now living longer, they aren’t necessarily living healthier lives,” explains Paul Galvin, head of ICT for health strategic programmes at Ireland’s largest ICT research centre – the Tyndall National Institute – and part of a group of Irish and Dutch researchers working on a major project to improve wound care treatment. “There are a lot of people who are being cared for in nursing homes with an increasing tendency to develop pressure wounds,” says Galvin.

A sharp increase in the incidence of diabetes has also contributed to the problem, according to Dr Conor O’Mahony, senior research scientist at Tyndall National Institute, and part of the same project as Galvin. “Diabetes can lead to ulcers, particularly in the lower limbs,” he says. “As the prevalence of diabetes increases, the number of chronic wounds associated with these conditions also rises.”

However, even before these wider, medical trends developed, efficient wound care management was a problem for clinicians. Despite recent breakthroughs like dressings that change colour to identify infections, wound care methods still depend to a large extent on visual inspection and manual techniques.

This means dressings are often removed when they do not need to be, creating extra costs for hospitals, unnecessary work for caregivers and needless discomfort for patients. “At the moment, it relies purely on what the specialist or the primary carer says after visually [inspecting] the wound,” says Galvin. “They have to take off the dressing, have a look inside and then assess the situation.”

In December 2015, the researchers from Tyndall National Institute, working with personnel from Fleming Medical, Holst Centre and Philips Innovation Services, announced the development of a new ‘smart dressing’ to tackle the problem of inefficient, expensive wound care management. The dressing, called DermaTrax and produced as part of the EU’s InForMed project, is packed with mini sensors that can pick up information about the wound and transmit it wirelessly to medical professionals. It will, the researchers claim, “revolutionise” wound care treatment as we know it.

“The idea is to have a variety of wearable sensors that can be placed on the wound dressing and can be remotely accessed, providing data to the clinician that enables them to monitor the condition of the wound,” Galvin explains.

The idea is to have a variety of wearable sensors that can be placed on the wound dressing and can be remotely accessed.

Those sensors could provide a number of different data streams, according to O’Mahony: “Embedded within the dressing will be a range of sensors,” he says. “Initially, there will be moisture and temperature sensors for sensing the condition of the dressing and the wound. We also want to sense the saturation levels of the dressing to see how much moisture is contained in it and how close the dressing is to capacity. And we’re also interested in sensing the temperature in and around the wound, because that gives us an indication of local infections.”

This is not, as the researchers admit, the first and only attempt to create such a dressing. Plenty of similar prototypes can be found in academic journals. What sets this project apart is that the team behind it is offering a product with actual commercial potential – the researchers estimate it will be commercially available by late 2017 or early 2018. “I am aware of many academic groups that are trying to develop smart dressings of different types,” Galvin says, “but until now no academic has managed to actually translate their idea into a commercially viable product.”

That success owes a lot to the combination of groups involved in the project. Holst Centre in Eindhoven offers expertise in wireless sensor technologies; Fleming Medical, headquartered in Limerick, is a leading medical equipment provider and Tyndall National Institute in Cork is one of Europe’s major research centres in ICT research and development. With funding from the European Commission Horizon 2020, and a number of other private and regional investors including Enterprise Ireland, Galvin says they have been able to avoid the notorious ‘valley of death’ that so many other researchers and start-ups succumb to.

“I think what is unique about this project is that we have a combination of technology research providers working together in a consortium where the focus is on translating technology into products,” Galvin says. “The problem statement came from knowledge Fleming Medical has, having already been involved in existing dressings for chronic wound care. They have a detailed understanding of the market space and are already providing solutions for chronic wounds. At Tyndall National Institute, we have a variety of sensors that we can put on such devices that are wearable and can be remotely accessible to provide data to clinicians. So through the combination of those two capabilities, we became engaged with the project with Philips Healthcare and the Holst Centre in Eindhoven. The academic groups don’t have this ability to translate their smart dressing concepts into products because they don’t have the commercial partners and the commercial focus that we do. People can get a nice research publication out of it, but often that cannot be translated into a product.”

When the project is complete, the researchers say that the dressing will have two main applications: one on the ward, the other in a patient’s home. “There is a hospital care setting where a doctor or nurse will deploy a number of these dressings in a ward scenario,” Galvin says. “The dressings will relay data to a base station so that the clinician can track the condition of the individual wounds using a hand-held device. There will also be a home-care scenario where a patient can apply the dressing themselves, monitoring the condition of the dressing on their smartphone and also have that data relayed to their clinician.”

In both cases the benefits are obvious. First: efficiency. Remote monitoring will – the group claims – cut out travel costs for carers and stop the unnecessary removal of dressings. “There is going to be a huge cost saving from a healthcare perspective,” says Kieran Quinn, marketing manager for Fleming Medical.

Secondly, with clinicians able to closely monitor the wound, the quality of treatment is likely to improve.

“The information from the dressing will be a lot more accurate because it won’t be just a visual assessment,” Quinn says. “They will be far more scientific details behind how the wound is healing and what the next stage of treatment should be.”

According to Galvin, this means early detection of problems with the wound and the dressing. “[Whether] there might be an infection, or the wound is seeping, or there is an issue with the type of dressing, requiring a different type of care, all that information will be fed back to the clinician,” he says, “so it can provide an early intervention into where the treatment is currently inadequate.”

The idea of sensors digging into an open wound might not sound so pleasant, but according to O’Mahony, the DermaTrax bandage will be more comfortable than what is already on the market. “The smart dressing is intended, from a patient’s point of view, to look, feel and wear just like a normal dressing,” he says, “so it is going to be soft and flexible. But unlike a normal bandage it won’t be torn off from raw delicate wounds anywhere near as often.”

Though operating the system may take a bit of training, the researchers say it will not take long to master. “There probably will be a certain amount of learning because it is app-related,” explains Quinn. “But with the advent of new technology and new apps we already do this in other diagnostics, so people are getting more used to it. We will just have to show them how it works and how it helps them make assessments and judgements.”

The technology could have implications for patient comfort well beyond the field of chronic wound care management.

While the group remains focused on bringing DermaTrax to the market, there are many ways in which the technology could improve in the future: “The increased miniaturisation of electronics and sensors means that we are now thinking about things that we could never have considered even five years ago,” says O’Mahony. “I would imagine even further sensing capability being added to those dressings in the future.” Galvin agrees: “Part of the effort will be in reducing the size and the cost of the electronics,” he adds. “We will reach a point where it is disposable and invisible even with the bandage dressing itself.”

Furthermore, as Galvin points out, the technology could have implications and applications for patient comfort well beyond the field of chronic wound care management. “You can imagine numerous other scenarios for this technology,” he says. “Ranging from post-operative wound care monitoring to general wearable technologies that are monitoring physiology in a non-invasive and wearable way. There are lots of companies, for example, working on the disposable contact lens as a wearable technology that can interface with bodily fluids and collect vital physiological information to transmit to a physician.” The ‘smart bandage’ is just one step in this technological journey. 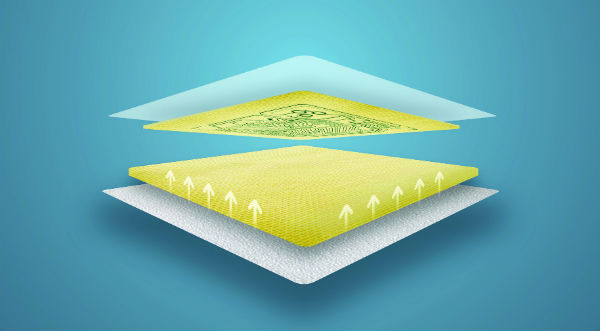 DermaTrax: looking to the future. 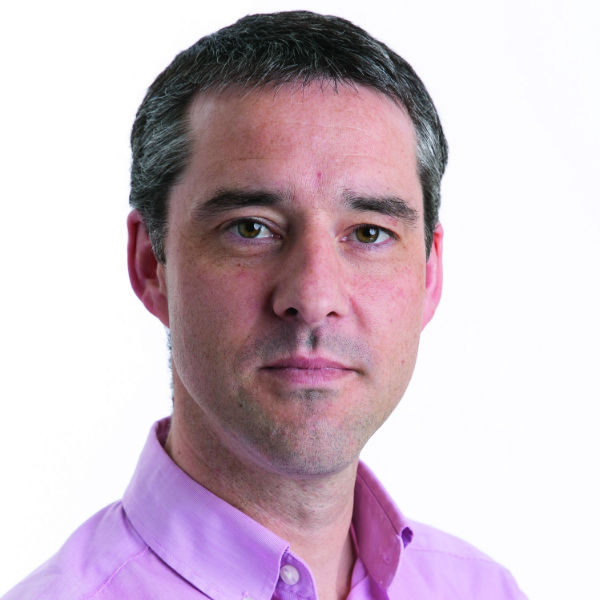 Dr Conor O’Mahony is a senior research scientist at the Tyndall National Institute at University College Cork, where he leads research activities in micro transdermal interface platforms (MicroTIPs). He is also lead investigator on the InForMed project. 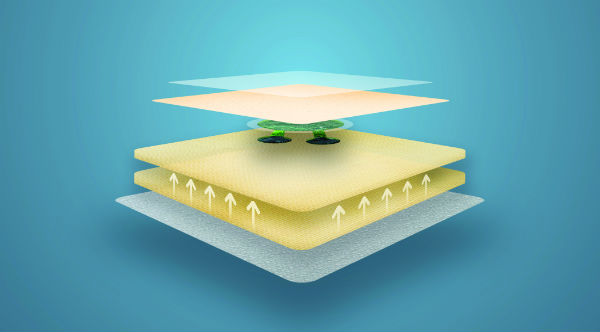 The DermaTrax is designed to sense moisture, temperature and saturation of the dressing.
Post to: