Essential tremor robs its sufferers of the ability to conduct everyday tasks and, until now, treatments have involved moderate to severe side effects, or brain surgery. Professor Wladyslaw Gedroyc, a consultant radiologist at Imperial College Healthcare NHS Trust, discusses with Greg Noone how focused ultrasound therapy can provide effective, non-invasive relief.

The NHS estimates that essential tremor affects the lives of one in four adults over the age of 40. Symptoms vary: almost all people will experience minor tremors when holding their hands out flat, but in more extreme cases patients are unable to perform simple daily tasks. Professor Wladyslaw Gedroyc, a consultant radiologist at Imperial College Healthcare NHS Trust, has witnessed such challenges that this condition presents.

“Patients can’t drink a glass of water,” he explains. “They do not go outside their house because they are embarrassed.” “When they go to a function and someone gives them a plate of food, it falls on the ground and everyone around them thinks, ‘drunk again’. They find it intensely embarrassing.”

For these patients, life is a series of coping mechanisms and tasks that are delegated to wives and husbands who grow accustomed to writing, driving and feeding their spouses. Treatments do exist, but they have varying degrees of invasiveness.

Sedatives or anticonvulsants – the type that treat epilepsy – can be prescribed, although patients can feel drowsiness and nausea; botulinum toxin may also be injected into the hands or limbs to block nerve transmissions in the affected muscles.

In the case of treatments failing, doctors can implant electrodes in the thalamus or perform a full-scale thalomotomy. Bleeding on the brain, balance problems and paralysis are among the side effects associated with these procedures.

Gedroyc, however, thinks that the time has come to reform treatments to avoid these unpleasant side effects and surgery. By using focused ultrasound to heat up and destroy the parts of the brain where abnormal neural connections are thought to cause essential tremor, the radiologist believes that sufferers will soon receive treatment without having to catch sight of a needle or the glint of a surgeon’s scalpel.

“When we treat these patients and improve their tremor, we boost their social function,” says Gedroyc. “They can drink, feed themselves [and] they are happy to go out – treatment returns task and functions that you and I would consider as normal.”

Gedroyc has been working with focused ultrasound for more than 18 years. Widely considered to be more powerful than the kind used to check on babies in the womb, MR-guided focused ultrasound allows radiologists to accurately target and destroy certain tissues, without recourse to risky interventional surgeries.

In time, he hopes to attack liver conditions with the same technique, once he overcomes the natural difficulty in treating an organ that has an unfortunate habit of shifting to different positions during the procedure. Gedroyc has no such problems with the brain – an observation that is rarely made by surgeons in almost every other field of medical study.

“Admittedly, the brain is surrounded by bone and keeps still,” he says. “By using enough power, you can get through the skull and deposit power in the centre of the brain.”

In 2016, London-based St Mary’s Hospital conducted a clinical trial with focused ultrasound based on this principle, which saw doctors treat severe essential tremor.

The trial used an ultrasound machine that was manufactured by INSIGHTEC, an Israeli technology company, which also provided the original funding for the trial. Gedroyc and his colleagues were able to treat more than a dozen patients with this, and the evidence that they collected will help the National Institute for Health and Care Excellence (NICE) to determine whether or not the procedure should be made available to the general public.

Gedroyc states that they began the trial by shaving off the patients’ hair. “Hair traps gas and this reflects focused ultrasound,” he explains. “When you have hairs remaining, you could have a build-up of heat and cause a skin burn.”

That, Gedroyc says, is about as invasive as the procedure gets. After their haircut, the patient has a metal frame placed on their head to stop them from moving – and preventing the team from sonicating the wrong part of the brain. After this, it is connected to a specialised transducer.

“The frame is then attached to the 1,000 element helmet-like transducer in the MR scanner, which is where the focused ultrasound is delivered,” he adds.

Most of the power that is delivered by the machine is absorbed into the skull, but the rest is concentrated in a specific spot within the thalamus, where the team hoped to interrupt the abnormal electrical circuiting that creates tremors.

“If you interrupt those electrical circuits, you stop the tremor,” explains Gedroyc. “The focused ultrasound does so by heating up bands of tissue in the right area and at the correct site to kill those cells.”

In December 2016, BBC News reported the significant amelioration of essential tremor symptoms in the trial’s participants. Medical correspondent Fergus Walsh followed Selwyn Lucas, a patient whose right hand began to vibrate uncontrollably whenever he attempted to use it. After five hours in the MRI machine, where Lucas’ brain was subjected to more than a dozen sonications in bursts every several seconds, his tremors disappeared.

“I’m absolutely made-up,” Lucas told Walsh. “It’s brilliant. I’m looking forward to being able to carry a tray of drinks without worrying about dropping them.”

However, there was no way of knowing if these results were permanent at the time of the trial. Since then, several other patients have undergone the procedure and Gedroyc is confident that their symptoms have cleared up to such a degree that there is sufficient evidence to justify conducting a larger trial.

“I would say that the results have been excellent, with a massive improvement in most of the patients’ tremors and an immense change in their social function,” he affirms. Nevertheless, Gedroyc and his colleagues have been extremely careful not to overreach in their attempts to eliminate all traces of essential tremor.

“We try to destroy it completely, but sometimes you have to balance the potential of creating side effects by putting more energy into the brain against the huge improvement that you have already achieved,” he explains. He then refers to an old adage in interventional work, ‘perfect is the enemy of good’.

Using focused ultrasound in this manner may be extremely new – only 24 of the machines used in the trial have been made – but treating essential tremor with this technique has also received the US regulatory seal of approval. With funding available for only two more test subjects, Gedroyc is waiting for NICE to confirm if the procedure can be made available on the health service. If the institute says yes, then the radiologist “will be able to treat hundreds of NHS patients”.

Even so, Gedroyc is not hopeful that a decision will be reached in the short term. NICE, he adds, is extremely slow. “Being timely is not their scene,” says Gedroyc. “They work in their own sweet time, as do NHS England, and at the moment it’s holding us up massively. We [have had] 500 referrals. There are many more patients who could be referred to us, so we have a massive discrepancy between what we could do and what we can do.”

In the meantime, a version of the treatment is being offered at Imperial Private Healthcare. Its possibilities are fascinating, states Gedroyc. “We’re not just talking about treating patients with motion disorders,” he adds. “This technique in the brain is going to be a huge player in all sorts of methods for treating brain abnormalities.”

Parkinson’s disease is just one condition that Gedroyc believes can be treated with focused ultrasound along similar lines to the procedure for essential tremor. The treatment of brain tumours could also be expedited by using focused ultrasound to open up the blood-brain barrier at selected sites, which tends to block the uptake of foreign chemicals into the organ. This would allow larger doses of chemotherapy drugs to reach the cancers that they are designed to treat.

“We can selectively open up the blood -brain barrier at sites of our choice with low-powered focused ultrasound,” says Gedroyc. “You can envisage a situation where all sorts of drugs might be potentially useful in the brain, but they can’t get there because of this barrier.”

Focused ultrasound could theoretically be used to ablate brain tumours, thereby avoiding the need for risky surgery. However, the technology has a little way to go before this kind of procedure would be possible. The kinds of sonications that are required would have to be larger and more targeted than the ones currently being used for treating essential tremor.

“That will happen with an upgrade in technology that will reduce the frequency of the focused ultrasound transducer,” he states. “We currently use 0.5MHz. We will go down to 0.25MHz, and that will allow for a much greater width of accurate therapy within the brain.”

With that comes the prospect of restoring a sense of self to patients. They could even live the kinds of lives that they dream of having. 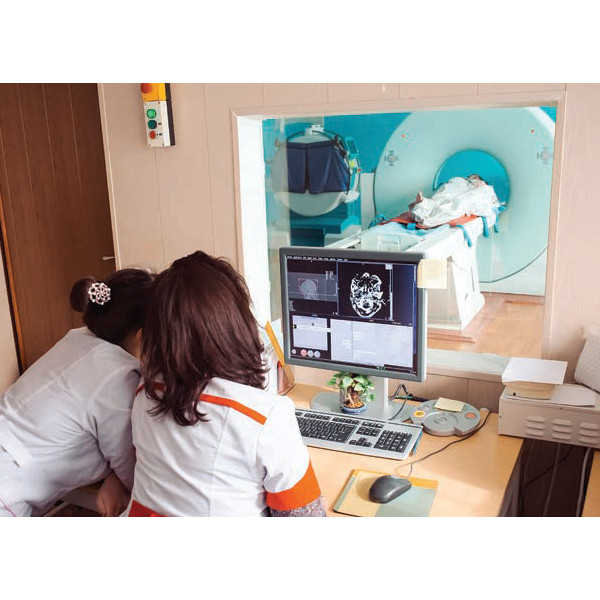 MR-guided focused ultrasound uses MRI to target very small areas in the brain. This way, molecules vibrate and create an intense heat that destroys unhealthy tissue by ‘cooking’ it. 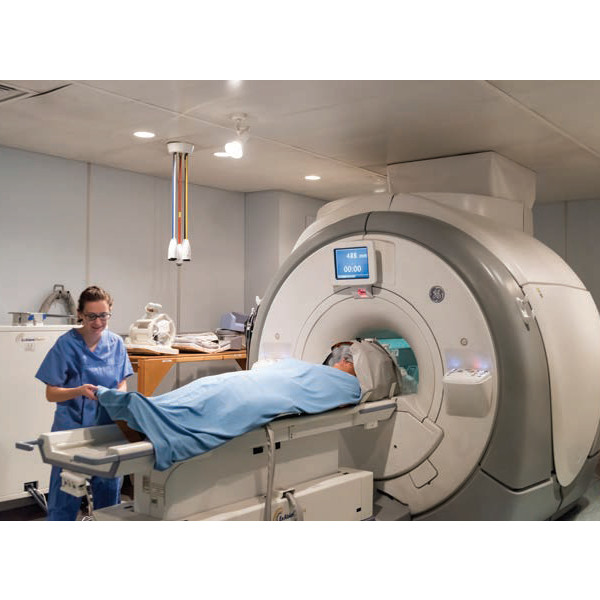 New technology will reduce the frequency of the focused ultrasound transducer to 0.25MHz, which will allow a much greater width of accurate therapy within the brain. 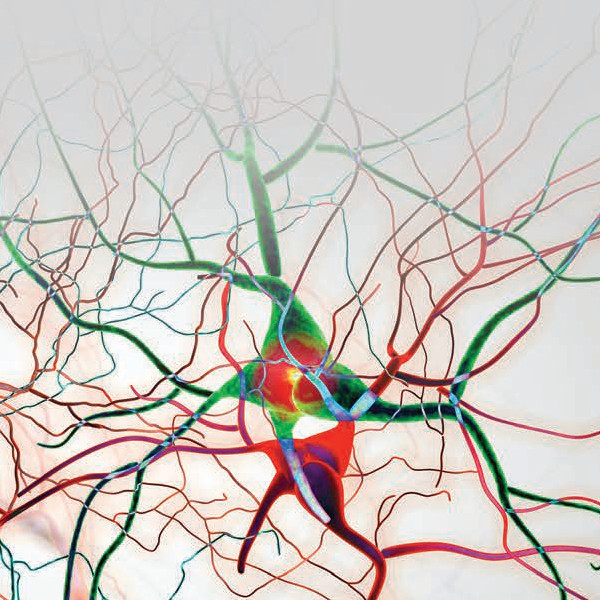